Metrolinx has opened talks with another transit builder as it pushes for a quick resolution to its legal showdown with Bombardier Inc. over a $770-million light-rail vehicle order for Toronto.

The regional transit agency alleges in a 2,000-page court filing that Bombardier's delays are putting the $5.4-billion Eglinton Crosstown LRT project at risk. And it argues that the Montreal-based company is trying to drag out the legal process so that Metrolinx won't have enough time to go to another supplier, even if it wins in court.

At issue are the 182 transit vehicles destined primarily for the Crosstown – which is under construction and scheduled to open in 2021 – and an LRT project planned for Finch Avenue West.

With Metrolinx edging toward cancelling the contract, the stakes are high for everyone involved.

Metrolinx will be on the hook for major fines if the vehicles don't arrive in time to open the Crosstown as scheduled. The agency, an arm of the provincial government, is also keenly aware that its political masters could change next year and is under pressure to show it can deliver big projects.

Earlier this year, Bombardier alleged in its own court filing that it would face serious business harm if it lost this contract.

The transit equipment manufacturers Alstom and Siemens, neither of whom would comment Thursday, are eager for a piece of this business.

Bombardier insists it is well within the overall timeline to supply the vehicles. In a statement, company officials said they "categorically disagree" with Metrolinx's allegations.

Bombardier says Metrolinx is looking for an excuse to reduce the size of its vehicle order because the government has changed plans on several of the projects. In February, the company filed a motion for an injunction that would stop the transit agency from pulling the plug on the contract. It is scheduled to be heard this month.

On Thursday, Metrolinx threw its counterpunch, releasing a pile of legal documents to buttress its claim that it is "entitled to terminate the contract for Bombardier's defaults."

One affidavit takes direct aim at the manufacturer's claim that its reputation would be at risk if it loses the contract. "Bombardier's record of failure to perform its obligations on public infrastructure projects around the globe is well-known and publicized," states Metrolinx executive Mark Ciavarro.

And Mr. Ciavarro, who is part of the capital projects group at the transit agency, alleges that the company's application for an injunction is, in effect, an attempt to rag the puck to preserve the contract.

"If Bombardier is successful in this application, or even in preventing this application from being determined on an expedited basis, Metrolinx will have no choice but to continue dealing with Bombardier and incur extreme losses, because the alternative will be even more catastrophic," he says in his affidavit.

Bombardier faces daily penalties of $1,500 per late vehicle, but Metrolinx is liable for much bigger costs. If the agency is held responsible for the late completion of the Crosstown – for example, by not providing enough of the vehicles it ordered from Bombardier – it could have to pay the consortium building the project as much as $500,000 per day in fines.

"The longer it takes Bombardier to deliver vehicles required under their contract, the more costs will increase for all parties involved – along with the inconvenience to the public through the lack of a completed transit project," Metrolinx spokeswoman Anne Marie Aikins said Thursday.

The legal filings and statement from Metrolinx cite a long list of allegations, including poor-quality manufacturing, problems meeting deadlines and slow construction. Among the many complaints, Metrolinx says Bombardier has repeatedly failed to deliver a prototype vehicle.

In its own legal filing, Bombardier said the vehicle was ready but Metrolinx was refusing to take possession. The company also argued that the original deadline for its delivery no longer made sense given that the opening dates for the projects had been pushed back. And it said it had discussed a new schedule for the vehicle with the Metrolinx representative on the contract and that he "never objected," leading the company to believe this was acceptable.

Metrolinx affirmed this week its desire for the original schedule, stating that "Bombardier has changed the expected delivery date for this pilot vehicle 30 times. It is still not ready, and is now almost two years late."

Letting Bombardier ‘crash and burn’ would be a disaster for Canada Subscriber content
May 17, 2018 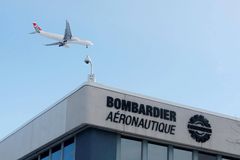 Bombardier goes to court to protect Metrolinx light-rail car deal
April 14, 2017
Metrolinx rejects Bombardier’s claims of laxity in wake of court filing
April 14, 2017
Follow Oliver Moore on Twitter @moore_oliver
Report an error Editorial code of conduct
Due to technical reasons, we have temporarily removed commenting from our articles. We hope to have this fixed soon. Thank you for your patience. If you are looking to give feedback on our new site, please send it along to feedback@globeandmail.com. If you want to write a letter to the editor, please forward to letters@globeandmail.com.
Comments