David Mirvish and world-renowned architect Frank Gehry have dramatically altered plans for their King Street West condo project, saving the Princess of Wales Theatre and heritage buildings on the block.

After more than 40 iterations, the latest plans include just two condo buildings, down from three, and are being welcomed by the city of Toronto planners who had objected to the density of the original design and its plan to demolish the theatre, and warehouse space they deemed to have historic value.

With the concessions to the city, Mr. Mirvish is hoping to receive approval to smash through height restrictions. One of the towers is designed to stretch 92 storeys into the sky, six more than first proposed. The tower would be 304.3 metres high, making it about six metres taller than First Canadian Place, the country's tallest building outside of structures such as the CN Tower.

The new plans were cobbled together in about a month, and are not fully complete. Neither is the approval process. But Mr. Mirvish is hoping the latest version will end the long process to win approval for his controversial and ambitious project.

He and Mr. Gehry said the clock is ticking. Mr. Gehry is 85 and Mr. Mirvish will turn 70 in August. Even after final approvals, the project will take many years to build. "We're moving as fast as we can now because Frank and I are both aging," Mr. Mirvish said on Tuesday.

The project is controversial largely because of its height and density, and the demands it would place on local infrastructure. Planners took issue with the original design on details ranging from the amount of parking (the city wanted more) to the shadows that might be cast on downtown sidewalks.

With no resolution in sight, Adam Vaughan, then a city councillor, struck a 14-member working group to seek a compromise. About a month ago, Mr. Mirvish held a third meeting with the group, and decided that he would do two towers and preserve the theatre and warehouse space.

The latest iteration of the plans have received a nod from that group and planners, but needs the green light from Toronto-East York community council next month and Toronto city council in July.

Toronto's head planner, Jennifer Keesmaat, said it is wrong to call the new plan a compromise. "It's a new project that's better than the project that existed before," she said.

Ms. Keesmaat said planning staff are "absolutely thrilled" with the result. "Frank Gehry has been able to use his creativity to come up with a proposal that, quite frankly, exceeded my expectations about how you could have a tremendous amount of development on this site and at the same time be very true to its historical context."

While the block would get a taller tower, Ms. Keesmaat said its slender profile would reduce shadows.

Mr. Gehry conceived the original design as a candelabra with three candlesticks. The two-tower design will be "sculpted almost like waterfalls flowing into a pool on one side, and on another aspect of it having a clay appearance," Mr. Mirvish said.

"Frank is building me a jewel box," Mr. Mirvish said. That "box" will be placed on top of the warehouse on the west end of the block, and will have 9,200 square feet of space to house art exhibitions. That's a small fraction of the space in the original design to house Mr. Mirvish's personal art collection. OCAD University will have a facility on the site as planned.

Mr. Mirvish, the theatre impresario, art collector and son of "Honest Ed" Mirvish, has talked about his project as sculptures for people to live in. He said on Tuesday that he has not yet figured out the financial details for the latest iteration.

"We're still doing the math as we go, because this is four weeks and it usually takes six months to design the details," he said. "But I'm sure we'll make it work. Frank always has an eye to not just making a design, but making something that will actually get realized and built and be able to be paid for."

The two towers together will have about 2,000 units, down from more than 2,700. The second tower is planned at 82 storeys. Peter Kofman, president of Projectcore Inc., the developer and project manager, said the buildings have been designed in such a way that they could be rolled out in phases based on demand.

Mr. Vaughan, the area councillor until he resigned his seat to run in a federal by-election next month, predicts the project will transform the intersection of King and John streets into the cultural heart of the city with the gallery, OCAD University, theatres and TIFF Lightbox.

"It is a great opportunity and a great project," Mr. Vaughan said. "We have saved the theatre and the heritage buildings. We found a way to work together." 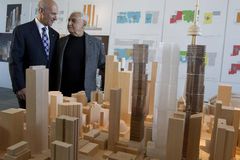 Toronto’s density plan is working, so keep it going
December 22, 2013 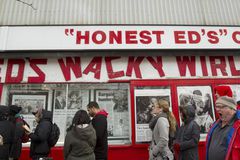 Follow Tara Perkins and Elizabeth Church on Twitter @taraperkins @lizchurchto
Report an error Editorial code of conduct
Due to technical reasons, we have temporarily removed commenting from our articles. We hope to have this fixed soon. Thank you for your patience. If you are looking to give feedback on our new site, please send it along to feedback@globeandmail.com. If you want to write a letter to the editor, please forward to letters@globeandmail.com.
Comments