Misha Glouberman shies away from generalizations, so while he will allow that he's aware this city has a reputation for being chronically apologetic, he doesn't buy it.

As a teacher of negotiation and communication skills, he sees any city as a perfect incubator for conflict. His interest in the field was sparked after a noisy bar opened beneath his apartment on Queen Street West, leading to a neighbourhood spat. Living in the city, he says, "you are always in conflict – and I don't think that's a bad thing."

Mr. Glouberman, who is something of a cultural fixture in Toronto, co-invented the wildly popular Trampoline Hall lecture series, which he has hosted for a decade, and (with his friend Sheila Heti) authored The Chairs Are Where the People Go, which was selected as one of 2011's best non-fiction books by the New Yorker.

On Feb. 19, he will begin teaching a six-week workshop in conflict resolution at the University of Toronto's Barnicke gallery.

Recently, over hot drinks, we sat in his apartment and talked about the things that get people riled up in this city.

Not really. It's not my life to know about that stuff. I'm always interested in how in politics – not just in politics – once you don't like someone you hate everything about them. I think that's been the case here in municipal politics. If people hate Rob Ford, they really hate Rob Ford. And then anything Rob Ford does is automatically bad, even if it wouldn't be bad if someone else did it. Typically our enemies and our allies and ourselves are a mix of good and bad. But there's an inclination to make it all or nothing and I think that's something to be aware of and try to overcome, particularly in politics.

Surely at some point, you were thinking, during this whole "War on the Car" thing, about the process of negotiation around those two sides.

It would be great if it weren't framed as a war by both sides – that's true at the very highest level of policy and it's true at the very lowest level of individual transactions on the road. It's unfortunate. There was this video where a cyclist got in a fight with a motorist. The cyclist posted it [online], presumably thinking, people will see what an asshole this motorist is in this interaction. I look at that video and I think, these people are both behaving terribly. It's interesting to me, that sort of partisanship that people have in themselves.

I get around by bike more than any other means. But I drive a car sometimes and I'd be very surprised if I've never cut someone off, not out of design but out of carelessness. When someone cuts you off, that becomes everything you know about that person and then you're like, That person sucks and they're everything that's wrong with this city and they're all motorists and they have no respect… when in fact what they are is, they're just a person who made a mistake.

What are your feelings on graffiti? Rob Ford made a big deal out of saying he wanted to stamp it out.

I guess one of the things for me, with graffiti, that always seems funny is the argument "Is it art, or is it vandalism?" as if that's a perfect, disjunctive thing. As if a thing can't be both.

If someone came and painted the Mona Lisa on your car, it isn't "Oh my God, now the Mona Lisa isn't a work of art, because now it's on my car," it's still a work of art, but also you are very rightly angry about having it painted on your car. Graffiti in the city – is it all beautiful? No, some of it's crap. Some of it's great. But the truth of matter is, if someone paints it on your door, on your storefront, you have the right to be pissed off whether it's great or not.

One of the big conflicts in your life came from living a changing neighbourhood. Now there are so many condos moving in here. How do you feel about that?

I'm excited to see what happens with the condos because one thing I've always felt is that it would be better for me if more people lived here. People have been complaining, "Why are we getting another nightclub? Why can't someone open a grocery store or a bakery?" I'm like, "No one's going to open a bakery 'cause no one lives here." On the south side of Queen Street there is very little residential use. Now that they've opened the condos, downstairs from me there's a bakery that everyone's been asking for for 10 years. And that's because of the condos.

Do you feel as if you're at a point now where things don't piss you off because you've been working on this?

What do we have to gain by seeing the other point of view?

One reason for that is because it's kind and it's compassionate, but the other reason is that – and I say this 20 times a day when I teach the class – if you're in a negotiation, it's almost invariably in your interest to understand the other person's point of view.

What sort of things do you do in the classes?

One of the exercises I like most that we do in the class is an exercise where we have people take a situation where they're having a hard time. It's like a role-play – they get interviewed first as themselves, and then as the other person. And then they have to act out the conversation, but when they act out the conversation, someone else comes out and plays them. It's sort of silly but incredibly powerful.

[A small, furry face appears at the top of the stairs.]

Joe, who is a cat, rarely gets to do any negotiation at all.

The Chairs Are Where the People Go, by Misha Glouberman and Sheila Heti
August 5, 2011 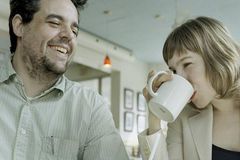 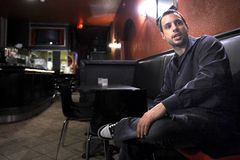