A soggy mix of snow,  rain and ice continued to drench much of Southern Ontario Wednesday morning, clogging roads, flooding basements and snarling the commute.

Temperatures were still hovering around the freezing mark, with no immediate letup in sight. By day's end, up to 20 cm of snow will have fallen, Environment Canada forecast.

Motorists were being urged to stay home, if they could,  or drive with caution.

All through the morning,  scores of flights in and out of Toronto's Pearson International Airport were cancelled as the slow-moving storm plodded across the region,  turning much of it to mush.

Most of the 200-plus flight cancellations – departures were hit harder than arrivals - were to and from the U.S. northeast, and travellers were still being advised to call before heading to the airport.

The forecast for the Toronto area is similar for much of Eastern Ontario as the system that has brought chaos to parts of the U.S. Midwest slowly dissipates.

Shortly before 5 a.m. Environment Canada's snowfall warning – triggered when at least 15 cm fall within a 12-hour period – was lifted for the Toronto, Peel and Halton regions, but remained in effect for the York and Durham regions, as the weather system moved east.

Most schools and universities stayed open as usual Wednesday, and public transit has so far been experienced only minor delays. Numerous school bus service across the region, however, have been cancelled for at least the morning.

In Toronto, more than 500 hydro customers were without power as of 7:30 a.m., Toronto Hydro reported.

Outside the city, the storm also cut  power to roughly 3,500 customers in Durham and York overnight, hydro authorities said.

Environment Canada issued a snowfall advisory Tuesday – the first for Toronto since earlier this month, when 30 centimetres of snow blanketed the city, prompting scores of vehicle accidents, hundreds of flight cancellations, and transit chaos.

The city's response – or lack thereof – was widely criticized and Wednesday's cleanup will be carefully watched.

The storm earlier this month sparked a series of problems, including a number of streetcars blocked by motorists who parked too far out because of snow banks.

Toronto Transit Commission spokesman Brad Ross said it would apply the "same protocols" used for the earlier storm. In a subsequent release, the TTC pledged that it would be out with parking enforcement staff "in force" and would "aggressively tow vehicles where necessary."

The mix of snow, ice and freezing rain made driving conditions treacherous in some parts, but traffic was lighter than usual, as many motorists heeded warnings to stay off the roads.

The only major accident reported was in Durham Region, northeast of Toronto, when two vehicles collided around 7 a.m. in the township of Scugog, leaving one person dead and another badly injured.

Several major roads in and around Toronto were flooded overnight, including the Gardiner Expressway, Lake Shore Boulevard and the Don Valley Parkway, but as dawn  broke, conditions had begun to improve.

By 8:45 a.m., the Canadian Automobile Association had logged more than 800 calls for assistance.

Councillor Denzil Minnan-Wong, chairman of Toronto's public works committee, said one difference he observed Tuesday was better communication before the snow hits the ground. He said there was much discussion between city departments and outside stakeholders on how to respond.

After the 30 centimetres of snow two weeks ago, Mr. Minnan-Wong conceded the city could have "acted differently." He also ordered a review of its snow-emergency bylaw.

The city hasn't declared a snow emergency since 1999, when mayor Mel Lastman famously called in the military to help clear city streets.

The response earlier this month was criticized not just by members of the public, but by councillors.

Mike Del Grande demanded to know why crews did not clear piles of snow left by plows, known as windrows, from the driveways of some of his constituents.

Peter Noehammer, Toronto's director of transportation services, said more than 1,300 employees were ready to respond to the storm, along with about 200 salt trucks, 600 road plows, and 300 sidewalk plows will also be deployed.

Mr. Noehammer said salt trucks would distribute their loads as early as possible to try to prevent the snow from being packed down.

"It's going to be messy in the morning," he predicted, given the snow is expected to be at its heaviest during the morning rush hour.

He advised people not to travel unless they absolutely have to.

Plowing will begin on highways when snow reaches a depth of two centimetres and on main roads when five centimetres has accumulated, and will continue until snow stops falling.

Residents in the downtown, who do not get their sidewalks plowed by the city, are expected to clear those spaces within 12 hours of the end of the storm.

Downtown, streetcars on King, Dundas and Carleton streets, all major conduits, were being diverted after streetcars broke down.

Streetcar delays were attributed  to snow and slush clogging the switches – the mechanisms that move the rails, allowing cars to shift  direction - at several key intersections.

Toronto's transit system will deploy de-icing units and leave half the trains in the tunnel overnight in a bid to head off commuter problems.

About 37 per cent of people in downtown Toronto commute by transit, according to municipal figures, and delays on the TTC can cause havoc.

Also planned were measures to keep rolling stock moving over the rails.

The situation at the TTC can be monitored at www.ttc.ca or through Twitter, via @TTCNotices .

Road conditions in the GTA can be checked here.

Go Transit schedule changes and updates can be found here.

School closings, transit delays and more: What you need to know about Ontario's storm
May 11, 2018 new
Toronto prepares for snowstorm: 'It's going to be messy in the morning'
May 11, 2018 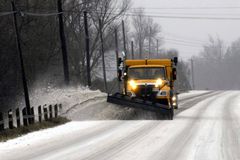 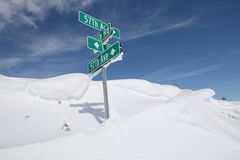 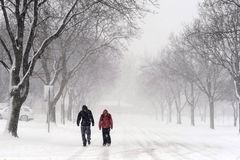