A veterinarian at Marineland and the organization in charge of monitoring animal welfare are denying allegations of animal neglect at the Niagara Falls, Ont., amusement park.

In a series of articles published by the Toronto Star, former Marineland staff have alleged animals were not being properly cared for at the park.

Dr. June Mergl, head of veterinary services at Marineland, says the allegations are without context, and notes that maintaining the welfare of the animals is a "balancing act."

"I can certainly testify to the quality of veterinarian care that we provide to the animals and the quality of staff care," she said, adding that constant monitoring of water quality is required and infections can occur for example when machinery breaks down.

"Unfortunately, sometimes some things don't work out as well as we'd like to — it isn't a perfect world."

Toronto city Councillor Michelle Berardinetti called for the provincial government to investigate the allegations and cast doubt on the ability of the monitoring organization, Canadian Association of Zoos and Aquariums, to do its job.

"These tragic stories would clearly indicate a high level of incompetence within CAZA with respect to inspections," she said in the letter. "The media articles clearly indicate that they fail to oversee the health and welfare of animals under the care of zoos and aquariums adequately."

Bill Peters, the national director of CAZA, said the organization has a rigorous inspection process for sites like Marineland.

"Any zoo or aquarium that wishes to become accredited and a member of our association has to go through a pretty detailed and comprehensive process," he said.

Mr. Peters also said that CAZA sends a team of investigators to spend several days examining Marineland and facilities like it every five years.

"If during that five-year period there are any problems that come to our attention whether that is in the form of complaints from visitors or media reports about the operation of that facility, the committee is empowered to investigate and take whatever action seems appropriate in the circumstances."

The last time the facility was inspected was in late August, 2011. CAZA has requested Marineland give it a report on the allegations and will send an inspection team to visit the facility within the next week, Mr. Peters said.

"I honestly don't think she understands our accreditation process," he said of Ms. Berardinetti's letter. "It is based on a set of standards that are among the best in the world and it is both rigorous and it is done with integrity and professionalism."

Mr. Peters also said that his organization is not prejudging the situation and entertains the possibility that the facility's conditions may have deteriorated in the year since the last inspection.

A protest organized by animal advocacy group Marineland Animal Defense is scheduled for Saturday outside of the front gates of Marineland.

"We're trying to hold (owner) John Holer accountable, and Marineland, for the various laundry list of abuses on site," said group spokesman Dylan Powell. "People are paying attention and people do care about what's happening at his park."

Mr. Powell said that there are fundamental issues with keeping animals in captivity.

"When you're holding animals captive in a situation where someone is profiting, the animals will always come second. They will never come first, it is profit first."

Dr. Mergl said that this is a complex issue and the staff genuinely care for the welfare of the animals.

"We invite people to take a look and we'll show you the animals that were mentioned and go over the cases. It's more complex than it looks and we only want a fair chance to defend the fact that we love our animals very deeply, we care about them and we take exemplary care of them." 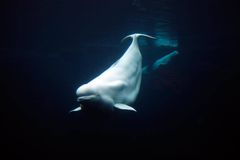 Off Sri Lanka’s coast, black days for blue whales
July 2, 2012
Report an error
Due to technical reasons, we have temporarily removed commenting from our articles. We hope to have this fixed soon. Thank you for your patience. If you are looking to give feedback on our new site, please send it along to feedback@globeandmail.com. If you want to write a letter to the editor, please forward to letters@globeandmail.com.
Comments