Toronto's public-health unit has confirmed another case of the measles, bringing to five the number of people in Canada's largest city diagnosed with the highly infectious disease in the past week.

The latest case comes on the same day that health authorities in Ontario's Niagara Region confirmed a case of the measles in a woman in her early 20s who had not been vaccinated. The unidentified woman was admitted to hospital with complications of the disease but is now recovering.

She travelled to Toronto twice in late January, the same time period when a handful of other measles cases turned up in the city. Public-health officials in Niagara and Toronto are planning to work with Public Health Ontario to look for links between the patients.

The most recent case in Toronto was diagnosed on Thursday. The patient is an adult whose vaccinations were up to date, according to Lenore Bromley, a spokeswoman for Toronto Public Health.

"We know that two doses of the vaccine provides 95 [per cent] protection, so we would expect to see 5 [per cent] of individuals who were vaccinated who may still get measles," Ms. Bromley said by e-mail.

She said that, so far, the public-health unit has not found any connection between this latest patient and the other two adults and two children recently diagnosed with measles in the city.

"We have been investigating the cases and exploring potential links, however, to date there is still no confirmed connection between these cases. This indicates measles is currently circulating in Toronto," Ms. Bromley said.

None of the first four patients had recently travelled outside Canada.

"From a public-health perspective, you'd feel a lot more comfortable if all of these cases were in the same place at the same time," said Michael Gardam, the director of infection prevention and control at Toronto's University Health Network, a group of four downtown hospitals.

"The fact that you aren't seeing that and you can't draw easy links implies that either there's been a couple of different circumstances of introduction of measles into the population or there are contacts of other cases you don't know about yet."

Toronto Public Health announced on Monday that laboratory tests had confirmed measles infections in two adults and two children under the age of 2. One case was confirmed on Jan. 29, two on Jan. 30 and one on Feb.1.

Ms. Bromley would not say which cases were diagnosed when, or precisely how old the patients are or where they live, citing patient confidentiality. However, she said that "it appears at least two cases were in the west end of Toronto."

She also confirmed that three of the first four patients were not vaccinated against measles.

One had received the first dose of the measles-mumps-rubella vaccine, which is routinely given to Ontario children at their 12-month or 15-month check-ups. The second dose is administered at a child's 18-month appointment. But the health unit would not confirm whether the patient who started a vaccine regimen is one of the children or the adults.

Toronto's mini-outbreak comes amid a political quarrel over immunizations in the United States, where 102 cases of measles were diagnosed in 14 states last month, most linked to an outbreak at Disneyland in California.

In most other years in the past decade, fewer than 100 cases have been confirmed annually across the country, according to the Public Health Agency of Canada (PHAC). In Toronto, measles remains rare: Just 14 cases were reported from 2009 to 2013, the last year for which statistics are available.

John Spika, the director-general of the Centre For Immunization and Respiratory Infectious Diseases at PHAC, said Canada's overall vaccination rate against measles is high – in the neighbourhood of 95 per cent – but that there are pockets where the rate is much lower. 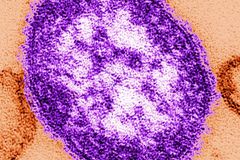 Graphic: What are the signs and symptoms of measles?
February 3, 2015
Follow Kelly Grant on Twitter @kellygrant1
Report an error Editorial code of conduct
Due to technical reasons, we have temporarily removed commenting from our articles. We hope to have this fixed soon. Thank you for your patience. If you are looking to give feedback on our new site, please send it along to feedback@globeandmail.com. If you want to write a letter to the editor, please forward to letters@globeandmail.com.
Comments