To police, Mark Garfield Moore is a vicious criminal who took part in a dozen shootings that killed four men and left more injured. But to his mother, he is many other things: a father of two, a college student, a champion basketball player and an aspiring musician.

"Mark is not an evil person or anything. Mark is a very loving and kind person," Hyacinth Moore said one day after the 27-year-old was charged with 56 gun-related offences. "He's not the tough guy they're trying to make him seem."

Dressed in a black jacket and T-shirt, Ms. Moore spent Thursday afternoon pacing in and out of the downtown courtroom where Kenya Smith is on trial for the slaying of another of her sons, André.

She said she can relate to the pain felt by the families of the men her son is accused of killing.

"They say my son murdered these people, I'm trying to say, I'm still giving out my feelings for those families," she said. "Because I'm going through the same thing right now, and it's not a nice feeling to know that somebody murdered your loved one."

On a Wednesday afternoon that November, a 16-year-old Mark Moore opened the family's apartment door at 1765 Weston Rd. to two strangers who attacked him. The reason, Ms. Moore said, was cross-city rivalry: the Moores were from Lawrence Heights and new to the area.

Mr. Moore fled down five flights of stairs pursued by the men, who were carrying an assault rifle. They shot him in the face, leaving him with a disfigured jaw. One suspect was arrested that evening, his track pants stained with Mr. Moore's blood. Among the officers who searched him at nearby 12 division was Constable Tony Macias.

On Dec. 17, a little over a month later, the young cop was himself outside of 1765 Weston Rd., on patrol in plainclothes. He approached a man pacing outside the front doors. The man fled, turning only to squeeze off a shot that struck Constable Macias in the shoulder above his bullet-proof vest. He survived. André was suspected of being the shooter, but he was never convicted.

Another son, Jerome, was charged last year with stealing a car from a dealership and crashing it into other vehicles, according to court documents.

Mark's life took a meandering path. There were criminal charges (Ms. Moore said she can't recall what they were for), and he struggled to find work. But he also excelled at basketball: Ms. Moore said he brought home trophies and ribbons in his youth. He also fathered two children – a seven-year-old and a one-year-old – both of whom live with their mothers. He completed half of a community college general arts program in hopes of eventually studying engineering, she said. He also cut a hip-hop album.

"I could see that he wanted to do something with his life," she said.

But somewhere along the way, police allege, he transformed into a serial killer. The term itself is contentious: some define it as any multiple murderer. Others say it refers only to those who kill for personal pleasure, not for financial gain or to protect their criminal enterprises.

Elliott Leyton, an expert on the subject, would not comment directly on Mr. Moore's case but said that, while unusual, there are examples of serial killers who straddle both worlds.

The picture police painted of him is also not one of a typical gangster. Street gang killings are usually targeted and specific, done to protect turf, said Michael Chettleburgh, who runs a consulting firm on issues of crime and social justice. At least three of Mr. Moore's alleged victims weren't involved in the drug trade.

If the allegations are true, Mr. Chettleburgh said, Mr. Moore would be "an exceptional case."

"It's not typical, you don't have multiple murders of people in a street gang," he said. "Murders are not going to be committed just because."

The families of Mr. Moore's alleged victims have been tight-lipped since his charges came down, but they are said to be keenly awaiting the judicial proceedings.

"One relative said 'there's no justice until we get to the end of the justice system,' " said Kemi Omololu-Olunloyo, an advocate for victims of crime who organized public appeals for tips on their behalf.

"I believe they should wait instead of judging so quickly. They should wait and don't just jump and believe," she said, adding that Mark has been listening to the things said about him in the last day. "I know he's hurting." 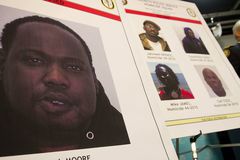 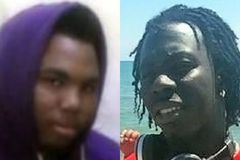 High-school student one of two killed in drive-by shooting
October 1, 2010
Follow Adrian Morrow and Kim Mackrael on Twitter @adrianmorrow @kimmackrael
Report an error Editorial code of conduct
Due to technical reasons, we have temporarily removed commenting from our articles. We hope to have this fixed soon. Thank you for your patience. If you are looking to give feedback on our new site, please send it along to feedback@globeandmail.com. If you want to write a letter to the editor, please forward to letters@globeandmail.com.
Comments are closed