TABASSUM SIDDIQUI
Special to The Globe and Mail
Published September 25, 2015 Updated May 15, 2018

If you follow musician Torquil Campbell on Twitter, you're familiar with the Stars frontman's penchant for eviscerating Conservative politicians in between passionately advocating for the arts, whether recommending a great pop song or a thought-provoking play. Earlier this fall, the prolific tweeter posted a simple hashtag: "#ImagineOct20th," a call to ponder what Canada could look like following the federal election – ideally in the wake of a Conservative defeat.

Others picked up the hashtag and ran with it, posting their ideas for a better, kinder, more progressive country. In the process, Campbell heard from fellow musicians Dan Mangan and Dave Bidini of The Rheostatics, both of whom shared his frustration with the left's inability to mobilize. They managed to rally the troops, quickly pulling together a series of shows coast-to-coast under the ImagineOct20th banner, including a Sept. 30 concert in Toronto at the Randolph Theatre featuring a lineup of notable names, including singer Feist, author Joseph Boyden and folk-rock duo Whitehorse amongst the nearly two dozen performers.

While the initiative may have originated with the artists, Campbell notes that it's open to all – in fact, there are now ImagineOct20th events taking place in at least seven cities across Canada, with more being organized every day.

"What's germane is that everyone in this country pick up whatever's lying around and use it as a blunt instrument to end Harperism in this country," Campbell says.

Both Campbell and Bidini dismiss any griping that the non-partisan, Anyone-But-Harper approach of notions such as ImagineOct20th will only lead to vote-splitting, arguing that their aim is to push their fellow artists – and citizens from across the political spectrum – to recognize that they can play a big role in spurring change.

"At the end of the day, everyone makes their own decisions about which way they want to go," Bidini notes. "That's why it's not dogmatic – it's more about triggering ideas and such. Whatever happens on the night of Oct. 19 is going to happen, but we want to ensure that those who feel they have an investment in this country, those voices are expressed and heard."

In fact, the artists participating in the Toronto event bring a wide range of perspectives: Feist is a signatory of the recent Leap Manifesto spearheaded by activist Naomi Klein and others; rising indie-pop singer Lowell has championed feminist issues; veteran troubadour Jason Collett calls himself a card-carrying member of the NDP who's campaigned for Toronto MP Andrew Cash, a fellow musician.

"I'm not particularly interested in non-partisan events," Collett admits, "but by and large, I see ImagineOct20th as a positive reaction to the manifold disgust so many of us have for the flagrant contempt the Harper Conservatives have displayed towards our country, its history and its institutions."

The urge to do something to make a difference, plus the tight-knit nature of the Toronto arts community, galvanized many of the performers to lend their talents to the endeavour, including poet Damian Rogers, who's worked with both Campbell and Collett on the annual Basement Revue cabaret series.

"It's exciting for me to see artists from different disciplines speak out in defence of what they think is right, because there is power there, more than we even realize," she says. "Poets, writers, musicians – all artists have incredibly developed antennae that tune into which way the wind is blowing. The goal is to articulate this weather in ways that help others experience the present moment more clearly, even if only for the duration of a song or poem or story."

Poised and articulate, 12-year-old emerging local singer-songwriter Brighid Fry might be the youngest performer on the bill, but likely the most inspiring: "Politics affects me directly no matter what, and so it is important for me to care and step in and try to change our lives for the better," she says.

Similarly, long-time musician Emm Gryner didn't hesitate to add her voice when asked to join. A mother of two young children in addition to her career as a busy solo artist and member of two bands, she sees women's issues as particularly important to the political dialogue: "When you give birth to a future woman, what's political starts to be personal," she explains. "I'm really not about picking sides, which is why this idea was interesting to me. You don't have to agree – the idea is to get our minds and hearts moving and thinking instead of sitting in a gutter."

While the Canadian arts community does have a tradition of protest and political action, much of that dates back to the folk-music era of the sixties and seventies and such activism has been on the wane in recent years, says Kip Pegley, associate professor of musicology at Queen's University. She notes that, of late, mobilization tends to be reactive (benefit concerts for a disaster or specific cause) rather than proactive. Pegley, who studies the intersection between music and politics, feels initiatives such as ImagineOct20th could be a good way to encourage dialogue but may not ultimately translate into action.

"You might have someone that's not political, but if they're a fan of the artists, it might get some people involved that might not otherwise be. But the problem might be that [going to the show] is the end of their involvement, so it's important that they're able to go beyond this and be more active participants in the electoral process," Pegley says.

"Sometimes we can sing things we can't say – people can be moved by music in ways they might not be otherwise, so something like [ImagineOct20th] might be a collective, a way for people to feel like they belong," Pegley adds. "I think what's good about this is that it's not only the concerts, but the ability for people who care about the issue to post their thoughts online. That could make this far more effective than previous such campaigns."

At the end of the day, ImagineOct20th isn't about a bunch of boldface names telling people what to do, Campbell says, but rather a way to encourage further discussion and motivation for those fed up with the status quo. But can nabbing a cheap ticket to see your favourite rock star at a small local theatre really be a conduit for political change?

"I think artists reflect the emotional politics of our society," Campbell says.

"I think it's time to get excited, and I think it's time to overcome our natural reticence to being the one who steps forward, and being confrontational. A bunch of thugs have taken over our country and we need to take it back. And then we can go back to being polite and apologizing for everything and writing good pop music."

Five events in Toronto that will bring up your political spirits
May 15, 2018 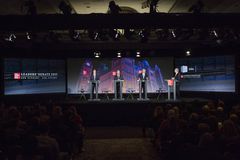 Park crawl and debaters: What to do in T.O. this weekend
June 5, 2017
Follow us on Twitter @globetoronto Opens in a new window
Report an error Editorial code of conduct
Due to technical reasons, we have temporarily removed commenting from our articles. We hope to have this fixed soon. Thank you for your patience. If you are looking to give feedback on our new site, please send it along to feedback@globeandmail.com. If you want to write a letter to the editor, please forward to letters@globeandmail.com.
Comments