Dignitaries are to gather at lunchtime Wednesday to celebrate the revitalization of Nathan Phillips Square, the broad plaza outside of Toronto's famous City Hall. The lead architects for the big makeover just got the 2016 Governor-General's Medal in Architecture. PLANT Architect Inc. and Perkins + Will Canada collected the award at Rideau Hall in Ottawa on Tuesday.

The honour is richly deserved. Entering a design competition in 2006, the architects came up with an elegant proposal to clean up and open up the square, reversing years of neglect and returning it to the spare splendour intended by City Hall architect Viljo Revell.

The plan was great. The execution was a disaster. The project went millions over budget and years past its original completion date. Now that it is finally finished, some of the plan's original elements are missing, cut in a "value-engineering" exercise after the work went over budget.

The raised walkway that surrounds the square was supposed to be spruced up with seating, new pavement and glass walls to provide a better views. Today it is much as it was before: a bleak no man's land of crumbling asphalt and stained concrete where few people venture. The east flank along Bay Street was to get new landscaping to help pull it into the rest of the square. It, too, is more or less unchanged, cut off from the rest by old metal railings. In the southwest corner, a restaurant pavilion was to rise, with big windows and great views of City Hall. When no private developer answered an invitation to build it, the area was left blank and empty, a big nothing covered in crushed stone. Now city officials are trying to find a use for the space.

Even in the parts that did undergo renovation, the city failed to put on some of the finishing touches or properly maintain what was built. Coloured bins for garbage and recycling cheapen the look of the square. A plan to install special stainless steel bins designed by the architects was scrapped to save money. Weeds sprout from the paving around the green roof at the base of the curved City Hall towers. The vast parking garage beneath the square is filthy, its asphalt floor coated with oil and grime. The stairwells leading from the garage to the square are dank and shabby.

On balance, the renovation is a big success. The new permanent stage on the west side means that the city no longer needs to erect a junky-looking temporary stage whenever it holds events. The new skate pavilion beside the ice rink is nice. Visitors can watch the skating from the roof. The disappearing fountains that spurt from the square in warm weather are a delight. The biggest improvement of all was moving the Peace Garden from the centre of square to the west side. That declutters the square for big gatherings and gives it back the open, expansive feel that Mr. Revell intended. The new garden is a pleasant oasis with benches where visitors can linger.

But the square still falls short of its promise. It could be a lot better if the city did two things. First, finish the job. A city that says it can find the billion dollars and more that it could take to deck over the downtown rail lands and build a new park on top can surely find the money to power wash the parking garage, finish off those walkways and install a bit of landscaping along Bay Street.

Second, put someone in charge of maintaining the square. Responsibility is now split among various departments and agencies, from facilities to parks to security. When everyone is in charge, no one is. The square needs a single custodian or overseer.

Nathan Phillips Square is another example of a typical Toronto problem. Authorities come up with grand plans for great public spaces, then flub the implementation and ignore the maintenance. You see it in the busted, chipping benches, the fountains that don't flow, the creative new parks that turn slummy overnight. It's bad enough when it happens elsewhere. To see it in Toronto's leading civic space, in the very heart of the city, is simply embarrassing. 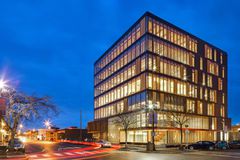