Let's not insult the residents of Humber Valley Village by calling them NIMBYs. Let's not dismiss them as the blinkered defenders of a wealthy enclave either.

Their Etobicoke neighbourhood is a gem. With its well-tended houses, winding streets and spreading maples, it is a classic mature suburb. At this time of year, with the fruit trees in flower and the leaves coming out, it feels like paradise. No wonder they want to defend their "village within a city." All the same, their fight against the redevelopment of the Humbertown Shopping Centre is way off base.

Humbertown is a 1950s plaza of the old school – stores and a big parking lot. A developer wants to rebuild it along modern lines, putting most of the parking underground and building residential blocks, townhouses and spruced-up shopping space on top.

Incensed neighbours say the development is "too big, too dense, too tall" for their stable low-rise neighbourhood. They argue that adding more than 600 residential units to the area will clog local streets like adjacent Royal York Road with car traffic.

At a community council meeting on Thursday afternoon, one resident said the project would unleash "chaos" on an area of "trees and peace, birds, nice people, safety." Another said that if children from the project won't fit in local schools and have to be bused elsewhere, they might face bullying and psychological trauma. Another said, "I despise underground parking." Still another said that if the project goes ahead, buildings of "monstrous proportions" would soon be popping up all over Toronto.

Mayor Rob Ford showed up to add his two cents. "It's not downtown, it's Etobicoke," he told reporters, while taking a break to stick Rob Ford Mayor magnets on car doors. "It's ridiculous. There's nothing wrong with Humbertown."

The ferocity of the campaign seems all out of proportion with the modest scale of the proposal. After initial protests last year, the developer has twice revised its plans, reducing the number of residential buildings to three from five, the number of residential units to 604 from 682 and the height of the tallest building to 12 storeys from 21. The buildings are to be surrounded by green space instead of blank asphalt, with four parks and squares that will fill 17 per cent of the site. It will have 230 trees, up from 165 at present.

An independently reviewed study showed that, with planned road improvements, the project should have little impact on traffic. A design review panel voted unanimously for the developer's latest plan, which revises the design to lend the buildings a modernist look.

A report by City of Toronto planners gives the project a firm thumbs-up. It notes that a 17-storey building already stands right across the street from Humbertown, and two others, one 10 storeys and one 14 storeys, are just down the road.

"The proposed height, density and built form are appropriate and the design reflects a continuation of the modernist approach for these lands," the report says. "The development makes efficient use of land and existing infrastructure and provides additional landscaping and open spaces."

Oh, and one other thing. In return for the right to rebuild Humbertown, the owner is to contribute $2.5-million to install public art and help fix up the local park and arena.

If the residents could put aside their anger for a moment, they would see that, far from wrecking their lovely neighbourhood, the project will enhance it, replacing a dumpy mall and a grey parking lot with a handsome, mixed-use village within a village. They might also see that, far from opening the floodgates to out-of-control development in the suburbs, it shows how modest redevelopment of underused spaces can increase density without destroying livability.

Toronto needs to accommodate hundreds of thousands of new residents in the coming decades. It won't do to house them in sprawling new subdivisions. Provincial policy forbids it in any case. We can't shove them all into downtown high-rises either. It makes perfect sense to find space in the suburbs, making them a little denser and a lot easier to serve with transit. Old malls like Humbertown are ideal for this kind of suburban infill.

A new beginning for Humbertown doesn't mean the end of Humber Valley Village. It will live on, leafy and sheltered, long into the future. Its devoted residents will see to that. 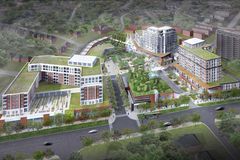 Fords vow to help residents in fight against Humbertown redevelopment
May 15, 2013 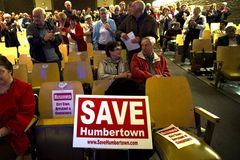