As she walked out of the Harbord Bakery, owner Susan Wisniewski chatted about her family's business. The bakery has been a popular hangout on Harbord Street near Spadina Avenue since her parents, the Kosowers, bought the business in 1945.

At the back laneway entrance, the delicious smells of the bakery wafted out.

"And there, that's the sign with our family's name," Ms. Wisniewski said, pointing to a street sign declaring Kosower Lane. "It just makes me feel so warm, like my parents are still here, every time I see that laneway sign. It's where my dad used to bring in the groceries from all the time."

The laneway is one of three in the Harbord Village that recently got a name memorializing community members. The local residents association has been working on a project for the past two years to name all 26 laneways in its neighbourhood, nestled between the Annex and Kensington Market. Currently, the names are being reviewed by city staff (to avoid any duplication) and will likely come before council in February or March.

Look on any map and you won't likely find these laneways. Google maps can't search them. And yet, there are 3,600 in Toronto, most of which are in the downtown core, built in neighbourhoods that sprang up during the Victorian era. Originally used as passages to deliver coal and groceries, these laneways continued to be built into the 1930s.

So far, the city has named only 200 lanes, and only where houses have front entrances facing them, or where there has been a special request, such as the one put in by Harbord Village.

The residents' association gathered more than 250 suggestions, which a jury then whittled down to the 23 names submitted to city staff. From the local pizzeria owner Giuseppe Porretta to Order of Canada winner Barker Fairley and Toronto's first black postman Albert Jackson, each name was selected for its significance to Toronto.

Laneway-naming co-ordinator Rory (Gus) Sinclair said the idea came to him in 2009 after a woman was swarmed and robbed by teens in the neighbourhood.

"A police officer suggested naming the laneways could help with response times," Mr. Sinclair said. "The laneways are impossible to describe ... you have to give strange directions right now, like the laneway between Major [Street]and Robert [Street] and then you have to say the north one or the south one, because Sussex [Avenue]cuts that laneway in half. It's all very confusing."

He said local residents have already latched on to the names, and one even used it while calling EMS, who immediately knew the location, without the usual protracted explanation.

When the Cabbagetown residents association was planning in 2009 to name all of its laneways after Canadian songbirds, a city staff report recommended going ahead as "naming the laneways will facilitate the dispatch of Emergency Services to the lanes and improve community safety."

However "the City has no plans to name public or private lanes," said Wally Kowalenko, Toronto's city surveyor, in an e-mail to the Globe. "The lanes are named when the need is identified by the public, a developer, a member of Council or City staff."

The possibility of laneway naming has also caught on at Seaton Village, the neighbourhood sandwiched between Christie, Bathurst, Bloor and Dupont streets. The local association is working on a list. 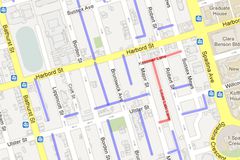