The reminder is everywhere: on the street when a pair of cops approach you, in a mall when the clerk asks to see what's in your bag, in your office when you're mistaken for the janitor, in school when the guidance counsellor asks if you're sure you can handle precalculus.

For many, simply being black comes with a lifetime of inescapable negative experiences, according to The Black Experience Project, a new study led by the Environics Institute for Survey Research and a range of partners including York University. It was based on in-depth interviews with 1,504 black people in the GTA. Half the population surveyed said they have been stopped by police; just more than half said they were occasionally or frequently treated rudely or disrespectfully because of their race; and two-thirds said because they were black, they had been mistaken for someone who serves others, such as a janitor or bellhop.

Shining a light on the police: Five questions with activist Desmond Cole

In an interview with The Globe and Mail, Carl James, an education professor at York University and one of the researchers behind the study, explains the lasting effect frequent police interactions has on the black population as a whole and how wealth and education offer little protection against profiling.

Half the black people you surveyed said they've been stopped by police in public but that number surges to 80 per cent when it comes to black males between 25 and 44. What's behind the targeting of this demographic?

I think it has to do with how black males are thought about in society. These stereotypes operate to influence the relationship we're going to have with the police, with teachers, with our neighbours. The sense [police] have of these people is that they are probably up to no good, probably mischief makers. In order to prevent any of those things that might take place, let us take pre-emptive action.

What's the effect of having so many of these interactions with police?

One youth sent me an e-mail where he talked about going home at 11:30 and police stopped him and searched him and in the process roughed him up. We then think we can't be out at 11 at night or drive a nice car or live our lives. It affects how we might trust police or a teacher.

We've seen a lot of reports in the past couple of months prepared by judges or human-rights organizations that look at policing and the recommendations are always the same: collecting race-based data, providing implicit bias training to police. Are these the right solutions?

I think collecting the data is absolutely important and critical but what we do with it is important afterward. Even though the data might be there, in a society where institutional racism exists, people might not believe the evidence because that's not their personal experience.

With personnel training, I'm not sure it helps unless people start thinking about how they're complicit, and also responsible for working at the issues, instead of, "I got some training. Black people aren't exactly all what I thought." I think we need a deliberate attempt coming from federal policies and programs.

We need different representations in media. It's not just when we hear about issues related to blacks that we get a black person on the radio. If a personal story is the only way that the larger society can be able to respect and understand and get to know the black person, I think that's a very sad situation.

Your results show that black people from the GTA from all class backgrounds had negative interactions with police. Your social standing, your education, it can't really protect you. Was that surprising?

No. If you're a doctor, a lawyer, a professional, the fact is, outside of those contexts, you're seen as who we construct you to be. We have to shift the thinking, shift the ideas to challenge the stereotypes.

You have a Ph.D. You're a faculty chair at York University. How does that have an effect on your experience being black in this city?

Eighty per cent of the people you surveyed said that they believed that others – specifically non-black people – saw them in a somewhat negative or very negative light. Do you think it's worthwhile trying to change the perception of adults? Or are those stereotypes too ingrained?

We have to get at the perception of adults. These are the people that set the laws, set the rules, set out the school curriculum, set out the kinds of processes that people need to live by. If they are allowed to maintain their ideas, nothing will change. Even if we worked with kids to have them see the world differently than the adults, after a while, they're inculcated by ideas held by adults and are going to think they're right. To be able to succeed, you might not be able to challenge the existing ideas, the status quo, so sooner or later these kids will have to fall in line.

I don't think it's just the individual ways it must be done. It has to be done with institutional practices. Since the police occupy a very significant place in society in which we live, the government's going to have to play a significant role in bringing them into understanding and respecting the role that they play and their relationship with the community. 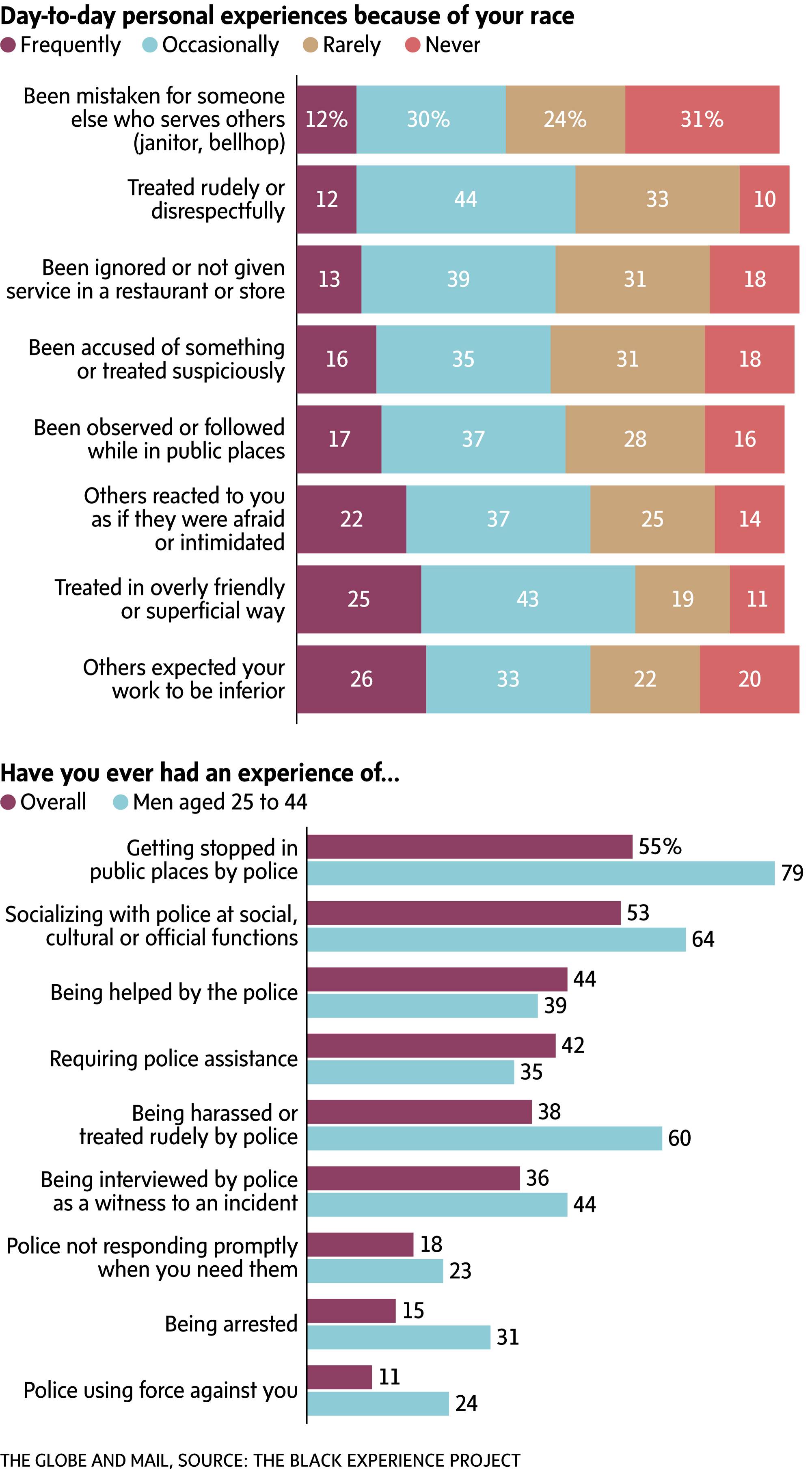 Shining a light on the police: Five questions with activist Desmond Cole
July 14, 2017
Inquest jury rules Toronto police killing of Andrew Loku a homicide
June 30, 2017
Black Lives Matter Toronto makes surprise appearance at Pride Parade
June 25, 2017
Follow Dakshana Bascaramurty on Twitter @DakGlobe
Report an error Editorial code of conduct
Due to technical reasons, we have temporarily removed commenting from our articles. We hope to have this fixed soon. Thank you for your patience. If you are looking to give feedback on our new site, please send it along to feedback@globeandmail.com. If you want to write a letter to the editor, please forward to letters@globeandmail.com.
Comments