"Rob does not like to be managed," Nick Kouvalis says.

Sounds like spin, coming as it does from the man who so deftly manages Rob Ford.

But it's not. The mayoral front-runner really does bristle under old-school political handling, which might explain why he has a bloody-minded ex-Chrysler worker once accused of uttering death threats against a Conservative MP running his campaign.

Nectarios (Nick) Kouvalis, 35, is the answer to what has practically become a parlour game at Toronto City Hall. Who's really running the Ford show?

Mr. Kouvalis's role is hardly a secret, but the intrigue stems partly from disbelief.

Dismissed as ill-fit for public office when he entered the race, Mr. Ford has become the man to beat without the help of any of Toronto's big-name political strategists, all of whom flocked to George Smitherman, Rocco Rossi, and, to a lesser extent, Joe Pantalone.

With a little more than three weeks to go until election day, veteran Conservative and Liberal strategists such as Warren Kinsella, Bernie Morton, Bruce Davis and John Laschinger are now panicking to figure out how to keep Mr. Ford from becoming mayor.

Mr. Kouvalis, a no-name by comparison, is prepping his candidate for what will undoubtedly be the fight of his career, especially if the others drop out and coalesce around Mr. Smitherman.

"Another poll will come out that shows us with a strong lead," he said. "They'll have no choice but to go negative and we expect that they'll throw everything but the kitchen sink at Rob in the last two weeks."

Mr. Kouvalis, who has dark hair, a goatee and a hint of thuggishness beneath his bonhomie, didn't start the campaign expecting to oversee its dirty denouement.

Richard Ciano, a Conservative operative and Mr. Kouvalis's partner in the strategy firm Campaign Research, signed on in the spring to draft the Ford campaign plan.

As Mr. Ciano grew more deeply involved, he brought in Mr. Kouvalis, who lives in Windsor, a day or two a week.

Both couldn't afford to devote so much time to one campaign, so Mr. Ciano stepped back, in part because he found the tight-knit Ford clan exasperating to handle.

It's around the corner from Ford family business Deco Labels and Tags, where Mr. Kouvalis sleeps in an office-cum-bedroom when he's in the city. He showers in a washroom off the factory floor.

They found anger over perceived municipal government profligacy and tax fatigue were top of mind for voters, not transit and transportation.

It was an extraordinary stroke of luck. The electorate was hungry for exactly the kind of waste-avenging on which Mr. Ford had built his political brand for 10 years - never mind the council-floor antics, ethnic slurs and a drunken night at the Leafs game.

Capitalizing on that good fortune, Mr. Kouvalis and Mr. Ciano picked some buzzwords that tested well in focus groups - the "gravy train" was one - and dispatched Mr. Ford to single-mindedly deliver a message about respect for tax dollars.

He took the tens of thousands of phone numbers Mr. Ford had scrawled down over the years as a councillor and stuffed in bankers' boxes, and had them entered into a database. Meanwhile, Mr. Ford and volunteers door-knocked in every ward in the city, painstakingly noting friends and foes.

As the first Canadian general election campaign to employ telephone town halls, the Ford camp places robo-calls to every land line in a particular area inviting voters to take part in a call-in "show" with the folksy councillor.

Halfway through, he asks them to indicate their voting intentions - and with the press of a button, Mr. Kouvalis's database grows by 7,000 names.

"Those who, at the outset, thought Mr. Ford would be running some sort of ramshackle campaign that would be lucky to cobble together a couple of websites and a brochure, I knew different when I saw that Nick Kouvalis was involved," John Tory, the former Ontario PC leader, said.

That's high praise from an erstwhile enemy. Mr. Tory respects Mr. Kouvalis's tactical skill because he nearly fell victim to it 2 1/2 years ago, when Mr. Kouvalis ran draftaleader.com, the drive for a formal review of Mr. Tory's leadership.

Mr. Tory hung on and Mr. Kouvalis volunteered to work for him until he lost a by-election the following year and stepped down.

Enough to take him to court, in one case.

On Jan. 24, 2007, a Windsor judge acquitted Mr. Kouvalis of uttering a death threat against Jeff Watson, the Conservative candidate and fellow auto worker whose successful campaign he'd led in 2004.

Mr. Watson was the first Conservative elected in the riding of Essex in 46 years. It was Mr. Kouvalis's first campaign.

In the next election, he decided to work for a candidate in a neighbouring riding. He and Mr. Watson had a falling-out.

On July 13, 2005, he allegedly told two young women working for him that, "If I could ... kill Jeff Watson with my bare hands and get away with it, I would."

Concluding there was no proof he was serious, the judge acquitted Mr. Kouvalis.

"I'm not the first or the last campaign manager who metaphorically wanted to strangle his candidate," Mr. Kouvalis says now.

"Actually, I thank Jeff. It made me."

More likely it got him started. If he manages the once unimaginable and gets Mr. Ford elected mayor of Canada's largest city, Mr. Kouvalis really will have it made.

With a report from Celia Donnelly 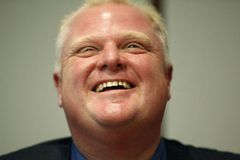