Olivia Chow ran a distant third in Toronto's mayoral election, the biggest prize of a 29-year political career eluding her after she entered the race as the presumptive favourite.

Ms. Chow had been trailing in opinion polls since the summer, unable to make up ground once John Tory became seen as a candidate who could beat Rob Ford. Once the ballots were counted she finished with 23 per cent of the vote.

"I'm going to keep fighting for the causes that matter," said Ms. Chow, who did not bite when asked Monday night if she might run again for mayor, or go for the leadership of the provincial NDP.

"This election has never been about me, it's about all of us. All of us here, all of us coming together to make progress."

People close to Ms. Chow's campaign point to a series of problems, including damage to the NDP brand during the spring provincial election and the return from rehab of a healthy seeming Mr. Ford, whipping up fears among those desperate to see him gone. By the time Rob Ford was replaced by his brother Doug in mid-September, eventual winner John Tory had a long-standing lead that he never relinquished.

"There was a big movement to say no to Ford," Ms. Chow told reporters. "I think this election campaign was really a lot about the Ford brothers."

Another difficulty was that she struggled to be heard during debates.

On the final weekend of the race, one insider on Ms. Chow's campaign called her a "conversation communicator" instead of a combative one. By contrast, Mr. Tory had honed his speaking chops during years on talk radio and both Ford brothers were quick with the soundbites.

Ms. Chow was often drowned out and struggled – with English that was understandable but not polished – to land stinging rhetorical blows.

The effects of this drawback were profound, said Warren Kinsella, who ran Ms. Chow's war room before leaving mid-campaign. In a lengthy race covering a large area and restricted to a relatively small spending limit, he said, post-debate appearances on television news were key.

"The clips are it, that's your exposure to the candidate," Mr. Kinsella said. "She's a lousy debater, and the people on the hunt for the dignified stoic widow … didn't understand that."

Ms. Chow was still in the lead when Mr. Tory rolled out the transit platform in May that became the centrepiece of his campaign. The Chow camp sought to turn it into a character issue, labelling it a flip-flop and suggesting Mr. Tory wasn't trustworthy. The attack didn't gain traction, though, and a campaign insider now acknowledges it came across as whining.

Only later did the Chow camp start to pick Mr. Tory's plan apart on its technical problems.

Damagingly, though, they appeared to have underestimated the public appetite for a plan that, whatever its flaws, promised to address congestion, which polling identified as the top issue.

All this while, Mr. Tory and Ms. Chow were competing for some of the same votes. But when Mr. Ford came back and looked to re-enter the fray, a substantial number of people decided to bet on Mr. Tory instead. He took the lead then and never looked back.

"Who knows, in a one-on-one showdown between [Mr. Tory and Ms. Chow], how the campaign might've ended up. But with Ford as the perceived second place campaign, the card of who can beat the Fords worked in the favour of John Tory." 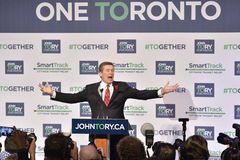 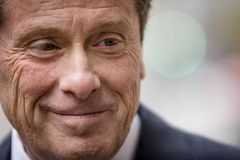 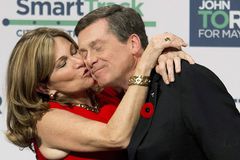