Police have arrested a man after a stabbing rampage at a Toronto company left four people wounded, two of them with life-threatening injuries.

The man allegedly attacked his former co-workers around 9:30 a.m. in a sleepy office complex on Yonge Street just south of Highway 401. Other workers were able to detain the suspect until help arrived.

"I believe the employees eventually subdued him until the police got here," Detective Dan Darnbrough told reporters at the scene.

A man and a woman were taken to a trauma centre with life-threatening injuries, said Kim McKinnon, a spokeswoman for Toronto Emergency Medical Services.

Two other male victims were taken to hospital with serious but not life-threatening injuries, she said. All victims, who are in their 30s and 40s, had multiple stabbing or slash wounds.

The victims work for Ceridian, a global payroll and human resources company. The company said the alleged perpetrator is a former employee at the Toronto office.

"Our thoughts and prayers are with the victims and their families," the company said in an e-mailed statement. "As you might imagine, this is a very difficult time. The entire Ceridian family is shocked and deeply saddened by this incident."

Ceridian said it would not release the victims' conditions, saying it wanted to respect their privacy. The company said it is co-operating with investigators.

Officers recovered a sharp instrument believed to be a knife, Det. Darnbrough said. The motive for the attacks was not immediately clear.

Wearing a blue striped button-up shirt and jeans, the suspect was loaded into a police car with his bloodied hands cuffed behind his back, according to CTV News video.

The incident occurred on the fifth floor of 4110 Yonge St., near York Mills Road. The six-storey tower is one of three buildings that make up the Yonge Corporate Centre, which is owned by the Cadillac Fairview Corp.

Dianne Hutchison, who works one floor up from the site of the attacks, said she first realized something was wrong when building staff announced on the public address system that there was an emegency. Then, firefighters did a room-by-room sweep of her office to check that everyone was unharmed, saying only that there had been an "incident" on the fifth floor.

Ms. Hutchison said her co-workers learned about the stabbings only when their phones started ringing.

"We had no idea what was going on until family members started calling," said Ms. Hutchison, an executive assistant at Spire Group, which builds and operates cold storage warehouses.

Tony Bitonti, a spokesman for the Ontario Lottery and Gaming Corp. who works in an adjacent building, went out to investigate after colleagues who had taken a smoke break told him of a flurry of emergency vehicles.

He saw paramedics attending to two men, one with a bandage wrapped around his head and jaw, the other man wearing a ripped white T-shirt. Both victims were able to walk to an ambulance with some assistance, he said.

"I was kind of in stunned disbelief," he said. "It's very quiet around here. Nothing ever really happens around here. We back onto a golf course, lots of trees. Very idyllic type of setting for an office complex." 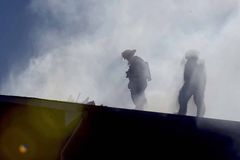