Prime Minister Stephen Harper kicked off a summer of pre-election infrastructure spending with a major pledge to tackle gridlock in Toronto, promising as much as $2.6-billion for a transit plan that allows him to help the country's biggest city without causing resentment in its vote-rich suburbs.

The $8-billion SmartTrack commuter rail plan has already proved popular with Toronto voters who elected John Tory as mayor last fall after he campaigned in favour of the idea, which would connect lands near Pearson Airport to downtown Toronto and Markham.

The political appeal of supporting Mr. Tory's plan is that the project would benefit many regions of the Greater Toronto Area, providing federal Conservative candidates with a concrete initiative to promote while door-knocking over the next four months.

With its roots in the province's GO regional rail network, Mr. Tory's proposal would extend beyond the boundaries of the city of Toronto and serve parts of Markham and Mississauga. Capturing votes in the vast area of suburbs surrounding Toronto will be crucial for all federal parties vying to form a majority government in the Oct. 19 federal election.

Mr. Harper and Finance Minister Joe Oliver made the announcement Thursday afternoon at the Toronto Transit Commission's Hillcrest Complex. Mr. Tory was also in attendance and said the federal money is "much appreciated."

"It will make a difference for generations to come," Mr. Tory said.

Numerous reports have warned that Toronto's traffic congestion is costing the economy billions of dollars a year in lost productivity. The growing region faces costly demands for expanded transit infrastructure as well as the hefty expense of maintaining existing services.

The Ontario government, which was not part of the announcement, has said that work it was doing anyway to upgrade GO rail service would constitute its one-third share of the project. The province issued a statement Thursday welcoming Ottawa's contribution, but urged the federal government to spend more on infrastructure. It also noted that the SmartTrack plan is based on existing provincial plans to electrify the GO corridors.

With federal and provincial funding in place, the city of Toronto must now give its final approval to the project.

Mr. Harper said Thursday that he would be surprised if the city didn't jump at the chance.

"Far be it for me to me to tell Toronto city council how to vote or not to vote, but when the federal government comes along with $2.6-billion to assist a visionary project of the mayor on which he was just elected, I would have a very optimistic view of the possibility of city council adopting this project," he said.

For the federal Conservatives, the ability to make splashy government announcements in the run-up to the October election gives the party an advantage over the opposition.

The Prime Minister acknowledged that his announcement comes in the context of a looming campaign in which other parties are promising to spend more on infrastructure. However, he countered that the Conservative record shows his government has increased infrastructure spending while still cutting taxes and climbing out of deficit.

The federal money will come from the new Public Transit Fund that was launched in the April federal budget.

The new fund was budgeted to start in 2017-18 with $250-million and would rise to $1-billion a year by 2019-20. Unlike previous federal funding models, Ottawa had said the program would spread funding over a much longer period, such as 20 to 30 years.

The federal government did not say Thursday how its share of the project funding will be delivered.

Mr. Tory ran in large part on a promise to expand on existing provincial plans to electrify the GO rail network and increase service. His proposal – which was dubbed SmartTrack during the municipal campaign – adds a number of stations to the provincial proposal and a new spur west alongside or under Eglinton Avenue to an area south of Pearson International Airport.

The province has suggested that the work it was going to do anyway on GO rail would constitute its share. The mayor says the city's portion would be funded by transit-related development.

The feasibility of elements of the SmartTrack proposal is currently being studied. And the whole idea is being evaluated as part of a broader city of Toronto look at a number of transit proposals.

That latter study includes a look at the long-proposed downtown relief line, which was the top transit priority of city staff before Mr. Tory took office. It is also looking at a Scarborough subway extension, a project the mayor supports but one that could be torpedoed by SmartTrack, which would run nearby and compete for ridership.

Mayors press for permanent transit funding commitments from Ottawa
May 12, 2018 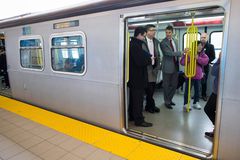 Tory says budget is win for SmartTrack, transportation minister has different take
May 12, 2018 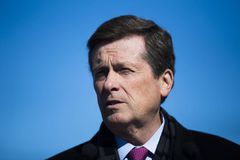 Ontario budget: A boost for businesses and a laundry list of transit projects
May 12, 2018 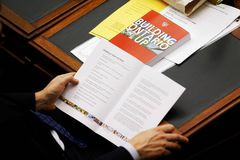 Follow Bill Curry and Oliver Moore on Twitter @curryb @moore_oliver
Report an error Editorial code of conduct
Due to technical reasons, we have temporarily removed commenting from our articles. We hope to have this fixed soon. Thank you for your patience. If you are looking to give feedback on our new site, please send it along to feedback@globeandmail.com. If you want to write a letter to the editor, please forward to letters@globeandmail.com.
Comments