If you see red, don't stop.

The City of Toronto is undertaking a pilot project to paint curbs red as an indicator of no-parking zones. The paint will serve as a supplemental aid for motorists who sometimes block fire hydrants and transit stops despite no-parking signs.

Over the next few days, the city will paint curbs red at nine different locations. Mayor Rob Ford said he has received complaints from people who have received tickets, saying they didn't know they couldn't park in a certain location because the signs were not easy to see.

"For a couple of dollars of paint, just paint a curb," said Mr. Ford at a news conference on University Avenue. "You look down, bang. You know instantly. You're not looking up. You're not blocking traffic, you're not meeting people honking at you. You pull in, you see red, you don't park."

"Parking signage can be confusing or unclear. We've all parked our car and looked up and looked confused," he said. "These red curbs will help drivers by making it crystal clear where they can park and where they cannot park."

Stephen Buckley, the General Manager of Transportation Services for the City of Toronto, explained that sometimes a fire hydrant can be at the farthest point away from the road on a wide sidewalk. It is not always immediately visible to a motorist and a small no-parking sign at the top of a pole can be easy to miss. He also added that clearer signage would help ease traffic congestion if cars are not blocking lanes in no-parking zones. As well, the paint would help with cars that are sometimes parked so close to crosswalks that they obstruct other drivers' views of pedestrians crossing the road.

One drawback of the red paint is that it will likely not be visible when the snow falls. Mr. Buckley said the city will assess the success of the project in about six to eight months and determine whether it should be expanded. He said Toronto is looking to see how painted curbs have fared in other North American cities. San Francisco, for example, uses colour-coded curbs for various things such as no parking, passenger pick-up and drop-off points, cargo loading and unloading zones, and parking for people with disabilities.

"My sense is that at the end of the day, this is not something we would be looking to do everywhere. We will probably try to use it at select locations," said Mr. Buckley. "It's simply a supplemental cue."

It costs $10 to paint one metre of the sidewalk, while a bigger sign with improved visibility could cost the city around $250, said Mr. Buckley. The weather-resistant paint is the same quality as that used to demarcate lanes on the road.

At the same news conference, Mr. Ford was asked about his desire to see a new football stadium in Toronto, following his trip to Winnipeg and Saskatchewan where he went to watch CFL games.

"I'm doing everything I can... I'm trying to sit down obviously with the owners, number one, and where can we build it? Where can we put a 35,000 seat stadium? We can either work on U of T, we can either work with BMO [field] or we can, maybe you know, at Downsview. Maybe at Woodbine." 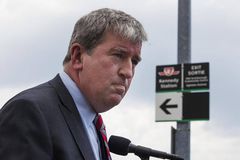 How to keep Toronto’s storm sewers from flooding? Bring the rivers back
July 19, 2013 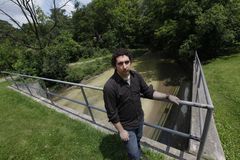 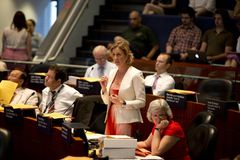 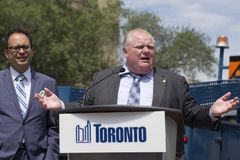