Perhaps he should have expected this. When Mayor Rob Ford said anyone could come on down to city hall to talk about budget cuts on Thursday, he must have known that he was issuing an open invitation to his fiercest critics.

More than 300 residents signed up to speak to the city's powerful executive committee in a marathon session that took city councillors late into Thursday night. And, ouch, did the mayor get an earful.

As Mr. Ford sat impassively in his chairman's seat, knocking back cans of Red Bull to stay alert, a parade of angry union bosses, troubled interest groups and alarmed residents lined up to describe their fears of what would happen if Mr. Ford and his cost-cutting Visigoths were let loose on Canada's biggest city.

It was all a bit much. The purpose of the epic meeting was to solicit the public's help with the hard choices facing the city as it wrestles with a $774-million budget shortfall. Instead, many speakers came with fear, complaint and conspiracy theory.

Teaching student Kim Fry accused Mr. Ford of trying to "eliminate" the public sector. If he succeeds, she warned, "it is our children who will pay the price and our great city that will crumble."

Nurse Cathy Crowe, of the Toronto Disaster Relief Committee, said that even children of four and five were expressing fear about cuts to public services. "They're fearing they're going to lose parks to play in with lots of trees, some that shed acorns for their collection. They fear losing really exciting streetcars and subways and special night buses where their dad might come home late from work."

Group after group testified that the dance groups it sponsors, the new-media lessons it leads and the local-food initiatives it backs could not possibly be cut without the darkest results.

To his credit, Mr. Ford took it all in stride, politely thanking each speaker, letting left-leaning councillors egg on speakers with leading questions and - at least as of late Thursday evening - hiding whatever annoyance he may have felt at the digs directed at him by an unfriendly crowd in city hall's Committee Room One. In doing so, he neatly insulated himself from any suggestion that he is bulling ahead with cuts without seeking public input.

His executive allies were not always as patient. Councillor Giorgio Mammoliti asked speakers what they would choose to cut - a question most of these folks, passionate believers in a well-funded public sector, were not remotely willing to answer. Councillor Peter Milczyn wondered which fear monger was causing kids to believe their parks and acorns were going to disappear. He had a point.

The series of consultants reports that led to this extraordinary meeting are not a recipe for cuts, only a list of options for city council to consider. It is unlikely, in the end, that councillors will risk voters' wrath by cutting popular services such as library branches or children's farms, much less wipe out parks.

Most of the cuts that were actually put before the executive committee by KPMG consultants were more palatable: things like outsourcing printing services, trimming generous benefits for cops, selling or leasing parking lots and garages and using more private contractors to maintain TTC vehicles (though some more controversial moves like killing the crossing-guard program were also on the options list).

Most residents would not wring their hands about changes like that if they saved the city money. But interest groups will fight tooth and nail. As former budget chief David Soknacki wrote in a recent piece, "The public will be treated to apocalyptic stories. Councillors will be subjected to intense lobbying. ... Faced with months of such unpleasantness, it is human nature to seek less painful solutions."

That helps explain the dire flavour of Thursday's late-night drama. 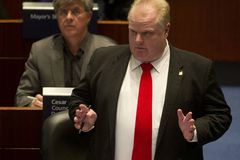