A proposal opponents warn would create the world's largest nightclub on Toronto's waterfront has residents raising noise and safety concerns and city lawyers preparing for a fight.

Prominent restaurant-and-dance-club entrepreneur Charles Khabouth took over Polson Pier, a sprawling site on the eastern side of Toronto's inner harbour, a few years ago. He has now submitted a request for a new liquor licence that would allow for more than 15,000 patrons: 7,548 people in indoor areas and another 7,971 outside. It is a huge increase from the current total of 5,673. A ban on outdoor live music events, agreed to by the club's former owners a decade ago, would be scrapped, opponents warn, if it is approved.

The two sides are set to clash next month, in a hearing before the province's Licence Appeal Tribunal. The city is opposing the plans before the tribunal.

The battle restages a fight waged a decade ago by island residents, who complained about the booming bass sounds that carried across the 750-metre channel of water that separated the easternmost shore of the Toronto Islands from the site's predecessor, known as the Docks. That time, a lengthy fight in which the tribunal stripped the site of its licence at one point, eventually ended with a settlement that had the club's then-owners agree not to hold live music outside.

Mr. Khabouth, known as the "King of Clubs," launched the now-defunct Guvernment nightclub and also runs several restaurants and is behind a new downtown boutique hotel and condo complex. Requests to speak to him were referred to the lawyer acting for his company on the licence appeal, Richard Kulis.

In an e-mail, Mr. Kulis denied that his client intends to launch the world's largest nightclub on the site, saying the rules require that the liquor-licence application include maximum capacities based on building and fire codes, but that Mr. Khabouth does not intend to operate a club that large. His client intends to "ask for capacities which closely approximate the present capacities of the business now operating the facilities," Mr. Kulis said.

Mr. Kulis said the business would observe Toronto's noise bylaws, and he said his client hopes to negotiate new conditions on any new liquor licence with concerned residents so that the current "redundant, unenforceable and outdated" conditions could be replaced.

(A nightclub on the well-known Spanish party island of Ibiza, Privilege, has in the past billed itself as the world's largest nightclub and has a capacity of 10,000.)

Lynn Robinson, an islander who chairs the Toronto Island Noise Committee that fought a battle against the same site 10 years ago when it was the Docks, said even under the current licence, with no outdoor musical events, rumbling bass still sometimes travels across the water and disturbs islanders, particularly those who live close to the water.

"It's enough that the people who live close to it are having a hard time," she said, remembering one event near the end of last summer when she "was in the living room of a 90-year-old woman and her house was shaking."

However, for most of the past decade, the ban on outdoor music events worked well, she said, and the site's owners were good neighbours. Now, she fears that Mr. Khabouth's plans for expanded outdoor events could mean a new battle with uncontainable noise from across the lake. Residents associations on the mainland are also raising concerns, including the York Quay Neighbourhood Association and the West Don Lands Committee.

The local city councillor, deputy mayor Pam McConnell, could testify at hearings next month. She says in addition to the potential for noise, there are safety concerns about the site, where intoxicated young people have fallen into the lake and drowned. Transit access is poor, she said, and the site is well-known for traffic problems. In December, a 19-year-old woman died of a drug overdose at an electronic dance music event held at the club, which is currently known as Rebel.

"It is not in the public interest to put the largest nightclub in the world in a new area that is just developing along the waterfront," Ms. McConnell said. "… You don't build a neighbourhood around a nightclub that has 15,000 people as of right."

Requiem for Hugh’s Room: Much-loved folkie venue a victim of cash-flow problems
January 16, 2017
Gripes about the TTC are well-founded, but the future looks brighter
January 17, 2017
The end of an era: Toronto bids farewell to iconic Honest Ed’s store
December 30, 2016 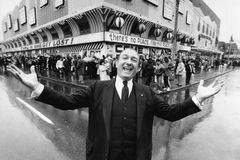