An autopsy has revealed that a two-year-old Ontario boy died from exposure to high temperatures after he was left unattended in a sweltering car for "an extended period of time."

Halton Regional Police are investigating the death of the toddler who spent hours in a sweltering sedan in Milton, Ont. on Wednesday, when temperatures soared to 31 C. The child was in the care of his maternal grandmother, who is in her 50s.

Detectives are still talking to neighbours to determine "the exact sequence of events," police said. Further toxicology tests are being conducted.

It is unclear how much time the boy spent in the car before paramedics were called after 5 p.m. The boy's father was at work and his mother was at an appointment at the time, police said. His five-year-old sister was at school.

The car was parked outside the rear garage of a townhouse on Jempson Path in Milton, which is west of Toronto. Residents of the quiet street are struggling to come to grips with the tragedy.

"I'm just in shock," said Shireen Dietrich, a 37-year-old recruiter who was home on Wednesday. "A lot of us on the street actually work from home and were home and it's just killing all of us that we were literally steps away and we did not know what was going on."

As is routine, homicide detectives are investigating the case because it involves the sudden death of a child under the age of five.

No charges have been laid.

So far this year, 15 children have died after suffering heat strokes in cars in the U.S., according to the kidsandcars.org. 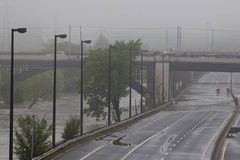