Police working on the unsolved homicide of an Ontario nurse say her "cold-blooded killer" may have moved away to avoid detection.

The man who killed Sonia Varaschin may have left the area or at least limited his social activities after she was killed in late August and her body discovered in early September, said Detective-Inspector Mark Pritchard of the Ontario Provincial Police.

He also likely had unexplained absences from work or other activities and was familiar with Orangeville and the side road where the 42-year-old's body was dumped.

In addition, the man also may have ramped up his drinking or drug use and may have been "irritable, agitated and anxious," Det.-Insp. Pritchard said.

"We release these behavioural traits today in a bid to zero in on Sonia's killer," he told a news conference in Orangeville. "Someone familiar with the killer may recognize these traits and we are appealing to that individual or those people to come forward and call the police immediately."

Investigators took the unusual step of calling in behavioural scientists from several other police agencies – including the Royal Canadian Mounted Police and the U.S. Federal Bureau of Investigation – to develop a profile of a suspect. Earlier this month, they held a three-day summit to review the case.

Det.-Insp. Pritchard said whoever killed Ms. Varaschin on Aug. 29 or 30 engaged in "some very high-risk behaviours," including removing her body from her Orangeville townhouse, driving her car, dumping her body and returning "almost to the scene" in her blood-splattered car.

Ms. Varaschin's mother, Michele Varaschin, made a heartfelt appeal urging anyone with information about the case to contact police.

"We are asking you to find the courage and strength to come forward. My daughter deserved to live her life to the fullest. She did not deserve to die at the hands of someone who felt her life was worthless," she said.

Ms. Varaschin, who read a statement in a steady voice, said there would be an empty place setting at the family's table this Christmas. "I wish this feeling on no one, so please help."

Orangeville Police Chief Joseph Tomei urged residents of the community, which is about 80 kilometres northwest of Toronto, to pay attention to their personal safety, including locking their homes and cars.

Police have received about 460 tips from the public and have interviewed more than 500 people.

Shortly after Ms. Varaschin's body was found in a woodlot on Sept. 5, police said the killer likely wore a pair of size 10 or 11 Dakota or Wind River boots sold only at Mark's Work Wearhouse.

Police have said that there was no sign of forced entry into Ms. Varaschin's townhouse and that she also did not allow the killer into her house. They suspect that he knew her, but do not know if she also would have known him.

Officers are also investigating an assault on a 44-year-old woman attacked in her home just north of Orangeville last week. While they stress that no links have been identified between the two incidents, investigators working on the cases are comparing notes.

Police look for links between attack and Varaschin murder
May 2, 2018
Boots may hold clue to Orangeville nurse's killer
May 11, 2018 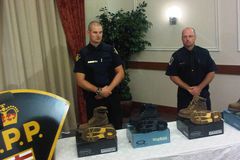 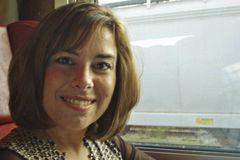