As in, "We can't let our focus be disrupted by distractions." This can range from an unfavourable review by a detested columnist to a social-media uproar because the running back fired up his Twitter account before putting his brain in gear to the middle linebacker's latest arrest for assault.

Rob Ford, the head coach of the Don Bosco Eagles high-school football team who has a sideline gig as the mayor of Toronto, is no different. But as distractions go, Monday's was a doozy.

A judge ruled Mr. Ford violated the Municipal Conflict-of-Interest Act when he voted with the rest of city council on the question of repaying $3,150 in donations to his football foundation for the Eagles that was improperly raised from city-hall lobbyists. The judge also gave the boot to Mr. Ford as mayor but allowed him 14 days to appeal, which set off the predictable uproar.

This made for a tense scene at Don Bosco, as Monday marked the team's final day of preparation for its biggest game since Mr. Ford resurrected the football program 10 years ago – Tuesday's appearance in the Metro Bowl, the championship of the Greater Toronto Area, against the Huron Heights Warriors of Newmarket. Mr. Ford said even before the judge's ruling that he planned to be on the sideline at the Rogers Centre despite the fact there was a city council meeting as the same time as the game.

Now, with the next steps by council up for debate as Mr. Ford announced his plans to appeal the ruling, it appeared Mr. Ford would finally have to pick politics over football. Wrong. The crisis did prevent the mayor from taking the field on time Monday but he still plans to coach in the big game.

His players said as much Monday as they straggled on to the field behind Don Bosco. Mind you, they had obviously been instructed not to talk to reporters.

Your agent was the only print reporter who showed up for practice (intermittent appearances by CBC camera trucks were the only other media activity oddly enough) and "No comment" was the order of the day.

One player said "he's a good coach," of Mr. Ford and then, trying to look as worldly and solemn as a teenager can, said "No comment," to another question. A group of four or five other players said the same, although one admitted they expect their coach to be at Tuesday's game.

The mood was similarly solemn among the Don Bosco staff members. There was no sign of the mayor as practice started and one fellow who spoke to the team uncomfortably muttered "I can't comment," when approached about what was going on.

A small knot of officials formed and reformed on the sideline as the players began warming up under the eye of Mr. Ford's assistant coaches. One of them was Toronto Catholic School Board spokesman John Yan. It isn't every day the school board's public-relations guy shows up at a high-school practice.

Mr. Yan said Mr. Ford was supposed to coming to practice but didn't know if he would make it. But he was sure Mr. Ford was going to be at the game Tuesday night.

"He's spent 10 years on this," Mr. Yan said, noting this is the first appearance by a Toronto Catholic School Board team in the Metro Bowl.

This was echoed a while later by the mayor's press secretary, George Christopoulos. He said Mr. Ford was on his way to practice but no one was sure if he would make it. But they were sure he would be there for Tuesday's game, although he acknowledged it was possible the uproar could keep Mr. Ford from being with his team.

"He's got plans to coach football but anything can happen," Mr. Christopoulos said.

Then, about two hours into the practice, Mr. Ford made his appearance. Dressed for the biting, windy cold in a hoodie and sweatpants, the mayor took the field for the last 45 minutes or so of a long run-through before the big game.

The coach, Mr. Christopoulos said, would not be talking to the media after practice. But, one sensed, he'll have plenty to say Tuesday night after the big game. 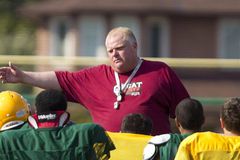 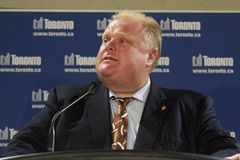 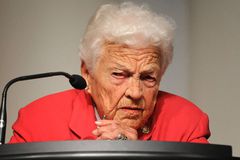 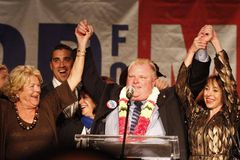