The latest plans for revitalizing Toronto's Port Lands blend existing industrial uses with the original vision of parkland and residential and commercial development – a change made at the insistence of local businesses and the Toronto Port Authority.

A revised proposal for the massive waterfront site envisions park users strolling on dock-side promenades against a backdrop of freighters tied up for winter or unloading cargo.

"The most boring waterfronts I've ever seen are the ones where they've razed everything and just built condos. Boring. No soul," said John Campbell, head of Waterfront Toronto, the three-government agency charged with transforming the site. "It's important to have what I call the theatre of the harbour."

The addition of this "theatre" is the latest twist in the political drama surrounding plans for the 1,000-acre site – plans that captured public attention last year when the mayor's brother balked at the high cost and slow pace of Waterfront Toronto's work and put forward an alternative that included a mono-rail, Ferris wheel and mega-mall.

As a compromise, Waterfront Toronto and the city joined forces and are ready with a new design and business plan to kick-start development. Industry and public advisory groups got the first peek this week, and a public meeting is planned for Aug. 8.

The latest changes are a variation by the original designer of his award-winning plans, which would have created a naturalized mouth for the Don River with parks along its bank and jutting into the harbour. That plan required the demolition of dock walls and did not take into account industrial users, including a large cement facility on private land.

"When the proponents came up with the vision, there's no way they could have forecast all the things in our complicated world that they had to accommodate," Mr. Campbell said.

Councillor Paula Fletcher, whose ward includes the Port Lands, said users and land owners at a meeting on Thursday were receptive to the latest changes. "What we are ending up with is an interesting compromise," she said. The revisions now include lush parks along the river, she said, placed in an "interesting urban space."

John Wilson, a long-time Don River advocate and an advisory group member, said people were aware of existing users, but assumed issues would be resolved in time, given the decades-long plan for redevelopment.

He called the new plans "encouraging." Revisions include leaving portions of the dock wall, while "softening" some of the shoreline, he said, as well as eliminating the promontory park and naturalizing only one side of the river, opposite the Lafarge Canada Ltd. cement facility. The area will be developed in phases, beginning with a "spillway" for the Don flood waters and elevating roadways to remove land from the flood plain and allow development, he said.

As early as 18 months ago, there were clear indications the original plan needed changes. A February, 2011, letter from the Toronto Port Authority to the Ministry of the Environment identified the "navigation risk" posed by a promontory. Letters on behalf of Lafarge protested that the design would eliminate its operations at the west end of the Port Lands. Redpath Sugar Ltd., which operates nearby, noted that it stores raw sugar in vessels moored to the dock walls in winter. By April, 2011, Waterfront Toronto and the Toronto Regional Conservation Authority acknowledged in documents to the ministry that "mitigation with regard to effects on private property owners, including Lafarge," was needed. That was not raised last year when citizens and councillors rallied behind the original Port Lands plan.

With files from Siri Agrell 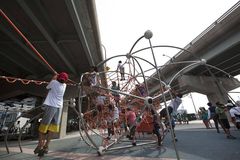