Prominent pot activists Jodie and Marc Emery have been fined and placed on probation after pleading guilty to a number of drug-related charges in a Toronto court.

Jodie Emery pleaded guilty to possession of marijuana for purpose of trafficking and possession of proceeds of crime over $5,000.

Three others with ties to the Emerys pleaded guilty to similar charges.

All other charges against the Emerys were dropped and the judge accepted a joint recommendation for sentencing the couple.

Each must pay a $150,000 fine plus a $45,000 victim surcharge and spend two years probation with conditions to keep the peace and be of good behaviour and not to participate, directly or indirectly, in any illegal marijuana dispensaries.

"I think this fine is extraordinarily high, I even offered to go to jail for a year, but they weren't interested," Marc Emery said to the judge.

Jodie Emery told the judge she knew what she was doing was illegal but was hoping in the future it would be legal.

"We thought we could make a really big impact on what legalization should look like," she said.

The federal government is set to legalize recreational marijuana in July 2018, but its sale has been left up to the provinces.

In Ontario, for example, marijuana will be sold by the provincial government in a series of dedicated stories, similar to how it sells liquor.

The prosecution read out an agreed statement of facts Monday that showed the substantial amount of cash earned at numerous dispensaries.

"Marc and Jodie Emery had established a sophisticated franchise model with the goal of operating dispensaries all across Canada," said Crown attorney Kiran Gill.

She said police began Project Gator in 2016 to look into Cannabis Culture, the marijuana brand operated by the Emerys that moved into the burgeoning dispensary business.

The prosecution said it was able to piece together the vast sums of money involved after police raided various Cannabis Culture locations across the country along with raids at the company's headquarters in Vancouver.

They found "tens of thousands of documents," Gill said, from contracts to receipts.

First, franchisees had to pay Cannabis Culture a $25,000 franchise fee plus a $3,000 monthly fee. Marijuana and cannabis products, from weed to edibles to merchandise, had to be procured by the franchisee.

Franchisees also had to pay six per cent to 10 per cent royalties on total sales to Cannabis Culture, court heard.

Gill provided court a snapshot of the money changing hands. A Cannabis Culture dispensary in downtown Toronto, owned by Marc Emery and Christopher Goodwin, was sending $20,000 to $45,000 in weekly royalties alone to headquarters in January 2017, according to transaction records police had seized.

"That's not money generated by the franchise itself, just the six per cent royalties," Gill said.

The couple's arrest at Toronto's Pearson International Airport in March was followed by co-ordinated raids in several cities of pot shops associated with them, court heard.

The Cannabis Culture brand was used at one point by a chain of 19 marijuana dispensaries in British Columbia, Ontario and Quebec, but the number of stores has dwindled to eight, according to their website. 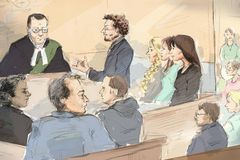 Illegal marijuana shops linked to activists Marc, Jodie Emery raided across Canada
March 9, 2017
Report an error
Due to technical reasons, we have temporarily removed commenting from our articles. We hope to have this fixed soon. Thank you for your patience. If you are looking to give feedback on our new site, please send it along to feedback@globeandmail.com. If you want to write a letter to the editor, please forward to letters@globeandmail.com.
Comments are closed