The window decal that served as a cheery welcome at Pride Toronto's Berkeley Street office – last year's festival theme, "You Can Sit With Us," scrawled in hot-pink letters – recently came down. Olivia Nuamah, midway through another marathon day, enters the building, walking past boxes filled with now-useless signs and volunteer T-shirts from last year's festival. They are less than a year old, but seem like relics from another era, when it was a given that uniformed cops in Dollarama leis would march in the Pride Parade and spray the crowd with water pistols.

Employees in the quiet space look up from their work to flash Ms. Nuamah polite smiles. After a complete staff overhaul, Ms. Nuamah, the organization's executive director, is the office veteran – even though she's only been on the job for eight weeks.

With the clock ticking down to June 1, the start of Pride Month, she hasn't even moved into her office yet. She hates the faux-leather executive chair and heavy wood-veneer desk, which look like they came out of a 20-year-old Staples catalogue. But she has bigger priorities than redecorating – such as figuring out what sort of relationship her highly scrutinized organization will have with the country's largest municipal police force.

Saying Pride's stance on police presence goes against the organization's spirit of inclusiveness, some city councillors are now threatening to pull municipal funding. Many police officers and members of the public say they plan to boycott this year's festival.

Though she hates the way the situation has been framed, Ms. Nuamah finds herself caught in the middle: respecting the wishes of Pride members, advocating for the most marginalized in the LGBTQ community and negotiating with police – an institution many from the first two groups see as the enemy.

Ms. Nuamah is 45, but on this drizzly April day, dressed in black athletic leggings and low-profile black leather sneakers, a tattoo peeking out from her V-neck tee, she looks much younger. Still, she has the polish and on-brand messaging of a seasoned politician, cultivated from a stretch working for the government in Britain and as an executive director at two Toronto agencies.

As a black woman (she's ethnically Ghanaian), Ms. Nuamah is accustomed to walking into a room and not being recognized as a leader. She's used to having her decisions seen as riskier or more ill-informed than those of her male counterparts, despite having three degrees. "I want to be taken as seriously as a white man in a leadership role," she says.

But in this position, more than any other she's occupied, it's impossible to hide her race.

"She has lived experience that other leaders of Pride have not had. That's going to be an advantage," says Suzanne Hawkes, a management consultant who worked with Ms. Nuamah in 2012 when she was the executive director of the Atkinson Foundation.

But she will be on the receiving end of both explicit and implicit bias as a queer black leader and may also face unprecedented pressure to be a saviour for the non-white members of the LGBTQ community, Ms. Hawkes says.

Ms. Nuamah, who grew up in downtown Toronto's Moss Park neighbourhood, says she "actively wears [her] race" and always has, but coming to terms with her queerness has been more recent. She thought of herself as heterosexual for most of her life and was married for more than two decades to a man she met after moving to Britain, where she studied, dabbled in DJing and worked in government. She and her husband had two boys, but when Ms. Nuamah turned 40, she realized she wanted something different. She spent a few years coming out and dealing with the dissolution of her marriage, then moved back to Toronto with her sons to a house in the St. Clair and Oakwood neighbourhood, which she now also shares with her partner, Becky McFarlane.

Ms. Nuamah didn't attend last year's Pride Parade – she was at home resting ahead of a night of volunteering with The 519's Green Space Festival, a Pride event. But after seeing news reports of the Black Lives Matter protest that brought the parade to a halt for half an hour, she knew how she felt.

"I thought, 'This is a conversation that's right,' and it was fitting that it was happening in the context of an LGBTQ festival that claimed an inclusivity that it seemed to be demonstrating through what I was seeing."

Since then, weeks before Ms. Nuamah was hired by Pride, the organization accepted Black Lives Matter Toronto's demands to ban police floats from the parade and increase funding and representation of marginalized groups.

But some members of city council, led by Ward 4 Councillor John Campbell, see this as a regression for the organization and have said they may withhold the annual grant they provide to Pride Toronto. Mr. Campbell says the police-float ban was not in the spirit of inclusiveness and that "grants are not given out with no strings attached."

Ms. Nuamah says she wishes she'd had the chance to speak to Mr. Campbell and other councillors before they made public comments about withholding funding from Pride. Losing city funding would be a serious hit to the organization, which in 2015 had expenses of $3.06-million, of which $260,000 was covered by a grant from the city. The annual event is a boon for tourism, with an economic impact of hundreds of millions of dollars.

Those who have worked with Ms. Nuamah describe her as a big-picture leader, the type who is less interested in rounding up the converted and more into bringing politically diverse groups together.

When people decline invitations to meetings she organizes, she has a tendency to call them individually to make a personal case for their attendance, says Frances MacNeil, who worked with her last year on an initiative for developmentally disabled individuals who were also homeless, part of Ms. Nuamah's work as head of the Inner City Family Health Team.

Ms. Nuamah says she has reached out to some city councillors and plans to speak to them before Pride Toronto formally applies for a municipal grant at the end of the month.

While Toronto Mayor John Tory, Mr. Campbell and plenty of critics have said the relationship between Pride Toronto and the Toronto Police Service is fractured, both Ms. Nuamah and Chief Saunders see it differently.

Chief Saunders sent her a congratulatory e-mail after her hiring was announced and the two met soon after.

His decision to pre-empt Pride Toronto by announcing in February that uniformed officers would not march in the parade this year was seen by some as a "you can't fire me, I quit" move, but he says it was misconstrued.

"It is not our parade, it is the Pride Parade and we are guests. So at any point in time they can invite us," he says. "Moving forward, I really do think the focus should be on the relationship building."

He says his conversation with Ms. Nuamah was productive. Since then, members of Pride Toronto's staff have been in touch with the Toronto Police Service.

"I've not received any type of negative vibe from her. She seems very proactive, very plugged-in, and by all accounts things are moving in the right direction," he says.

Ms. Nuamah's relationship with police is also complex. In her position as Pride's executive director, she is working out the logistics of police presence at the parade this year, but she's also navigating life as the black mother of two biracial sons.

Two years ago, she gave her older son, then 11, the talk on how to handle himself during interactions with police. Though she has faith that Pride Toronto's relationship with police will improve, she's a realist about anti-black policing.

One of the biggest struggles of the job so far, she says, also comes down to race. It's difficult for her to hear the language media and critics use to describe Black Lives Matter Toronto in relation to her organization, which counts some of its activists as members.

"The question I'm asked is, 'Were you bullied into this situation?' 'Were you extorted?'… It all has this air to it of violence," she says. "It's vilified a group of really brave young people who were using a platform that is their right to use to talk about what it means to be citizens of this country and residents of this city."

Pride Toronto should lose public funds if it upholds police ban
April 14, 2017
Pride Toronto: A protest, a celebration, or both?
November 12, 2017 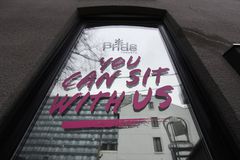 Pride Toronto hires its first black female executive director
April 14, 2017
Follow Dakshana Bascaramurty on Twitter @DakGlobe
Report an error Editorial code of conduct
Due to technical reasons, we have temporarily removed commenting from our articles. We hope to have this fixed soon. Thank you for your patience. If you are looking to give feedback on our new site, please send it along to feedback@globeandmail.com. If you want to write a letter to the editor, please forward to letters@globeandmail.com.
Comments