You'd be tempted to say it was that kind of night, given that half-a-million Torontonians thronged the downtown in fits of crazy ecstasy the moment the Blue Jays captured their first World Series title in far-off Atlanta.

But Lori was the only fan among the 500,000 who was celebrating the victory by strolling up Yonge in her wedding dress.

No one displayed the spontaneous joy of an incredible moment better than this newly minted bride, arm-in-arm with her beaming husband, Winston Ivey. Fans who thought they couldn't be happier found a new level of delight as the Iveys came into view, expressing by their very unexpectedness the feeling that there was no better time or place to be a Jays fan.

"Because I was in my wedding garb, people felt like they could come right up to us," Lori says from her home in Sault Ste. Marie, Ont., where she, Winston and their five children have lived since 2007. "They were high-fiving us, giving us things like a championship pennant and a giant foam blue J – even a can of beer. The crowds were so thick that at one point my veil was way back in the crowd and my head was tilting back. There were cops on horses and people climbing on street signs, but I still remember it as a good, safe feeling – everybody seemed genuinely happy."

Many people in the crowd saw the instant appearance of a bride and groom in the moments after the Jays' Game 6 triumph as a perfectly choreographed surprise, because what were the odds of an outdoor wedding march coinciding with a late-night World Series win? "I remember all kinds of people shouting at me, 'You guys planned it great,'" says Winston.

But of course it was just a very happy accident, one of those normal, natural, once-in-a-lifetime events that take on a completely new resonance set within the city's simultaneous celebration.

The only planning they had done was to make a wedding-night reservation at the SkyDome hotel, knowing rooms would be available because the Jays were booked to be on the road. They were formally married at St. Joan of Arc church in the afternoon, and then headed to a reception at the Old Mill, along the banks of the Humber River. The reception overlapped almost exactly with the night game in Atlanta. Technology was limited in those days, but someone brought a miniature TV and the revellers crowded around for frequent updates between dances.

"Someone said to me, 'Weren't you upset that people were watching the game at your wedding?'" Lori recalls. "No, not at all. We went to the games all the time, back in '91 and '92. It was great for us, too."

They stayed late, outlasting most of their guests, then took a limo to the dome. It was after midnight, but the tense game had gone into extra innings. And now a stadium's worth of jubilant fans, who'd been watching the game on the Jumbotron, were pouring onto the streets, looking to prolong the wonderful feeling when Mike Timlin fielded Otis Nixon's bunt and threw to Joe Carter at first.

"The limo driver was kind of panicking," says Lori. "So we got out on Blue Jays Way, took one look at the crowd and said to each other, 'Let's go.'"

At Elm Street and Yonge, near Sam the Record Man, they stepped away from the wall-to-wall crowd for a (relatively) quiet break on the side street. And that's where Globe and Mail photographer Roger Hallett found them, still smiling brightly. It was a long night. They didn't make it back to their room at the SkyDome until 4 a.m.

Twenty-three years later, the wedding dress is "in a box somewhere," Winston's tuxedo is a lot tighter than it used to be, the commemorative foam blue J has been passed on to the next generation of fans and the Iveys know their anniversary is on the horizon because the World Series showdowns have begun.

Lori is a speech pathologist, helping preschool children. Winston works overnight shifts at a steel plant, drives school buses, coaches highly successful local basketball teams and grabs a nap here and there. Their five children are all athletes, with a marked preference for basketball – Winston credits the Raptors effect, enabled by the Jays' prolonged post-season drought.

But with the Jays back in contention for another title, the Iveys are preparing to celebrate their anniversary in throwback style. If the 2015 team can win the World Series, the 1992 duds are coming out again.

"Where will we walk this time?" Lori asks Winston.

It's been 23 years, but her husband's ready with the answer. "Right downtown in the Sault." 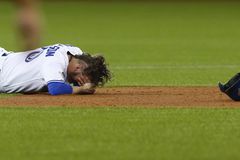 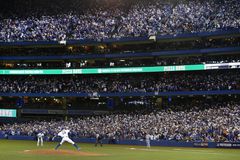