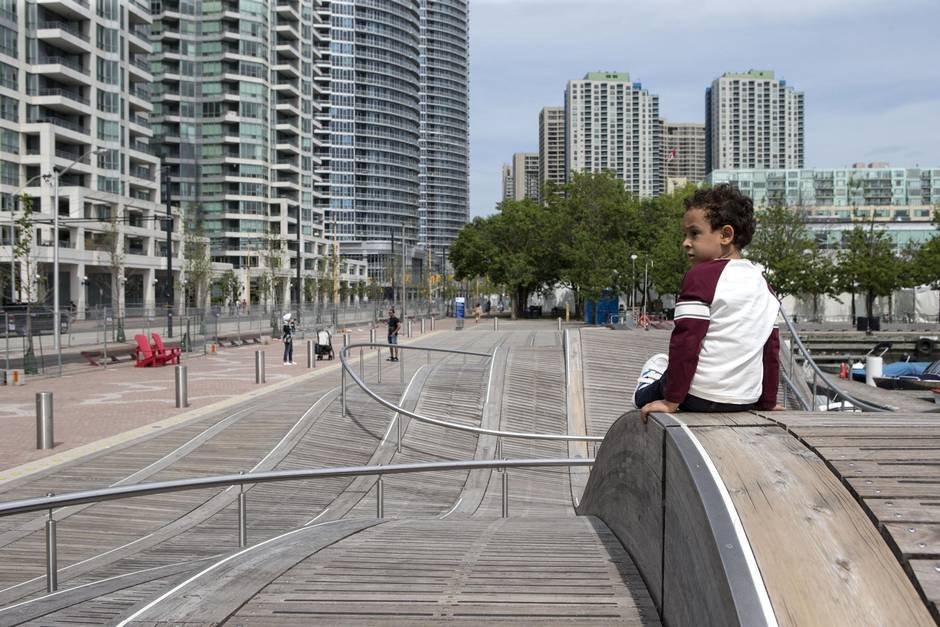 (Photos by Chris Young for The Globe and Mail)

The mason was chipping away the granite by the inch: Picking up each small block, studying its lines, knocking off a facet before laying it firmly in place. Then he moved on to the next 10-centimetre hunk of pink stone, as he and his colleagues filled in the face of Queens Quay.

“This is how it is done,” said landscape architect Jelle Therry of the firm West 8, “in very small ways, but very carefully and with great craft.” Mr. Therry was giving me a hard-hat tour of the street, which reopens this week after a three-year renovation by West 8 and Toronto’s DTAH that is largely complete.

This 1.7-kilometre project for Waterfront Toronto is a street, but that’s not a simple thing. It has been shaped with real craft and with clear thinking about materials, traffic, climate, crowd psychology and the culture of the city. The Queens Quay project will be an example of thoughtful 21st-century urbanism.

Start with those paving stones: They are Royal Canadian Red, San Sebastian, Caledonian granite, all quarried in Quebec. For this tourist-friendly zone, Mr. Therry says, “we thought it was appropriate to use a Canadian stone.” It’s being laid in two-tone patterns, with expanses of pink cut by the outline of maple leaves in grey. The stones are held in place with polymeric sand, a product that grows firmer when you add water. They’ll stay in place, Mr. Therry says, and allow women in high heels to move without fear of being tripped up.

From this game of inches, the design vision here extends to a grand scale.

Queens Quay’s street and sidewalks were in ragged shape, an assemblage of poorly maintained pavements, driveways and walkways that didn’t connect, overhead power lines and tangled traffic patterns. West 8 and DTAH, with others, won a design competition in 2006 to remake the entire central waterfront, and Queens Quay brings that vision close to completion. So far it includes the WaveDeck – mounds of cedar and ipe wood that have become landmarks around Harbourfront – and promenades along the water’s edge.

The new pavement, including the maple leaf pattern, matches that already in place along the water. New benches, made with ipe and painted a bold red, continue the subtle theme of sleek Canadiana. All this is intended to form a continuous public realm that is decidedly friendly to pedestrians and cyclists. Pedestrian paths meet car driveways with no curbs, marked only by a change in the colour of the paving stones. 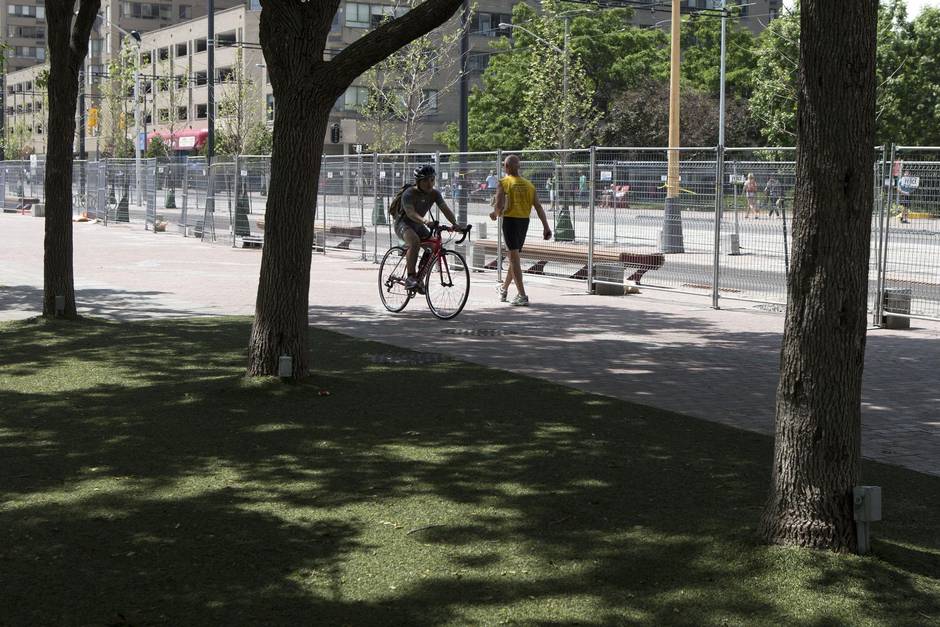 Along Queens Quay, the project reorganizes traffic: Car and streetcar lanes are together in the middle, with wider sidewalks on both sides. A bike path (an extension of the waterfront Martin Goodman Trail) runs along the broad south side of the street. This leaves cyclists safer on the road, a challenge that seems especially, tragically important this spring; one of DTAH’s founders, Roger du Toit, was hit by a car while on his bicycle in Rosedale May 19, and died of his injuries. On Queens Quay, cyclists pedal alongside pedestrians and have their own traffic signals.

Will texting pedestrians step in front of them? Will cyclists follow the lights? At first, they probably will and won’t; Mr. Therry agrees with a shrug, but then suggests locals will adapt. And it is true: A street generates its own culture.

“This is about rethinking how we, as human beings, behave in a city as we move from point A to point B,” Mr. Therry says. “How does that story go? How do you feel at each moment in this journey?”

The sidewalk on the south side also includes a double row of trees. These are London plane trees; they’re each being planted inside a silva cell, a hollow frame that contains a generous amount of soil for the tree while supporting the weight of the pavement above. Built-in irrigation channels in the pavement will steer rainwater to the trees’ roots and then the overflow into the sewer system. 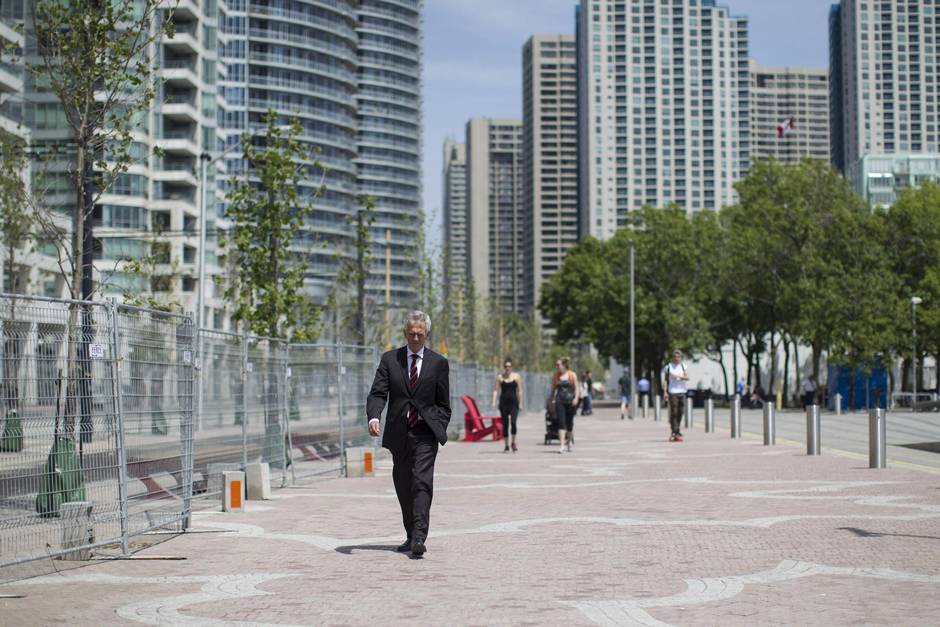 Toronto is a bad place to be a street tree. Too often here they are stunted and die young. But, Mr. Therry says, “not these ones. They will do fine,” he says. All but three of the 240 trees are now in place; the species include freeman and sunset maples, linden, elm, Turkish hazelnut and sunset honey locust.

Some of those species are unfamiliar in Toronto; the landscape architects chose them, such as the London planes, because they’re native to slightly warmer zones. As climate change continues and Toronto’s average temperature rises, they should thrive. “If you are making a place for 100 years,” Mr. Therry says, “you have to think in these terms.”

Mr. Therry is not prone to grand statements; that is, precisely, the task at hand. West 8 are global leaders in landscape architecture, and with DTAH (among Canada’s leading firms) they are designing a spine for the entire central waterfront – increasingly busy, and increasingly crowded with new homes, offices and public space. West 8 also, with Toronto’s KPMB and Ken Greenberg, won the competition to redesign the nearby Jack Layton Ferry Terminal and park.

This month’s Queens Quay opening is timed to line up with the Pan Am Games. (That’s basically a pretext; there will not be any events in the area.) The project is largely, but not quite, finished. Most importantly, most of the custom streetlights designed by West 8 – which integrate lighting, electrical power and traffic signals – won’t be in place. The project also has had substantial cost overruns, rising to about $130-million. 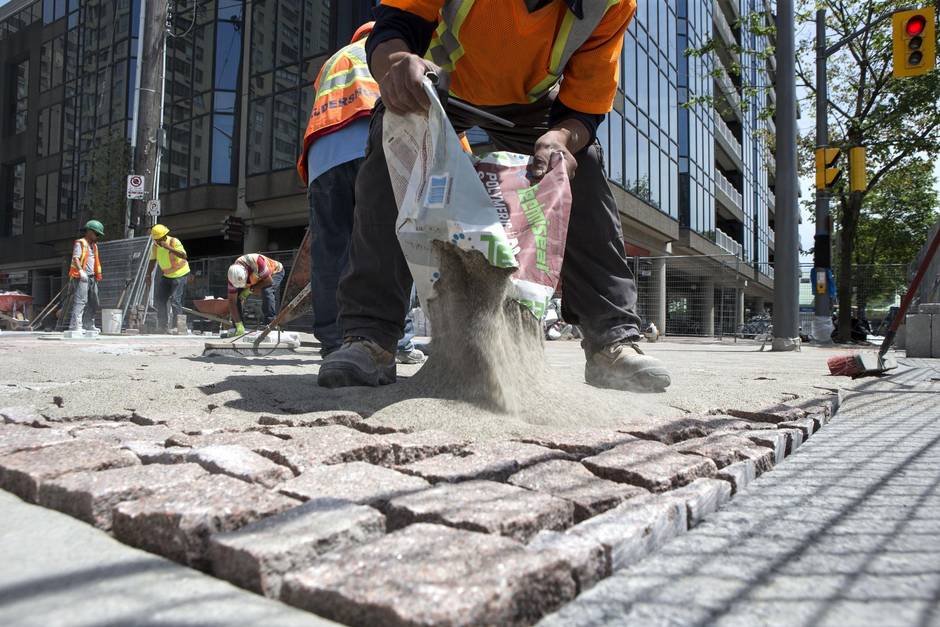 Why? Waterfront Toronto has cited a number of factors, most having to do with inaccurate site information and the difficulty of working with utility companies. In a construction site office, Mr. Therry showed me a drawing of the roadway with utility lines underneath: a spaghetti of gas and water lines. “And as soon as you opened the pavement,” he said, “everything changed.” The reality did not match.

But when do drawings ever match reality? In this case, they’re coming pretty close. After a decade of work, the central waterfront is getting the public realm that it deserves.

It sits, paradoxically, right between the Gardiner East and Billy Bishop Toronto City Centre Airport; with a rebuild of the highway and a possible expansion of the airport, prominent Torontonians are ready to sacrifice good urban design to make way for more regional travellers in cars. We should be careful. Who we are as a people is reflected in the way we lay each stone.