'I don't want an obit," Raymond Souster told fellow poet James Deahl a few days before his death. He considered the details of an artist's life unimportant.

And yet Souster's life was anything but unimportant. He was the last of Canada's great modernist poets and, along with Irving Layton and Louis Dudek, changed the course of Canadian literature.

Souster, who died of colon cancer in Toronto at age 91 on Oct. 19, published more than 50 volumes of his own poetry and edited a dozen more. Considered Toronto's unofficial poet laureate, he won the Governor-General's Award for Poetry in 1964, the City of Toronto Book Award in 1980, and was made an officer of the Order of Canada in 1995.

He edited three avant-garde literary journals, started an influential reading series, and along with Dudek and Layton started up Contact Press, a publishing house that touched the lives of many talented young writers.

Michael Ondaatje, who had been another one of Souster's young poets, wrote, "He brought many of us to the surface and we owe him everything."

For more than 40 years, while pursuing his literary endeavours, Souster worked as a teller and later as the keeper of the vault at the grand old Canadian Bank of Commerce Building at 25 King St. W. (except for a brief stint during the Second World War).

Every weekday at 5 o'clock, he emerged from the bank like a spider from a cave. One friend recalled that his skin was so pale you could count the veins. He wore a proper suit, thick black frames hiding his eyes, and had tight-cropped grey hair. Every evening he would step lightly toward poetry, jotting verse into one of his notebooks, establishing himself as Toronto's strolling bard.

His subtle, understated, often derelict glimpses of the city requested that we slow down, reserve judgment, and take it all in – like a series of still photographs.

"Many people live quite happily by denying the ugliness around them. Poets live deeper than that," Souster once told an interviewer.

Raymond Souster was born in Toronto's west end on Jan. 15, 1921, to Austin Souster and Norma Baker. His father, also a bank teller and lover of literature, supported Ray's creative spirit and encouraged him to publish his first poems in the Toronto Star when he was 14.

"I wasn't very good, but my father didn't seem to know that," Souster said. "That was fine because his pride in my achievement actually launched my poetry career."

Souster attended the University of Toronto Schools and immediately dropped deeper into poetry, letting his other subjects slide, mentored by his English teacher "Bunny" Baird. He read collections by Robert Frost, Ezra Pound and Stephen Spender, a free-fall journey into modernism, unrhymed monologues and a poetry of place.

In 1939, he followed his father down to the bank one day and began a lucrative day job (something of an anomaly for poets). While there, he also met and fell in love with Rosalia Geralde, another teller. They were married eight years later and stayed together until his death last month. All his books are dedicated to Lia.

Souster left the bank briefly in 1941 and joined the Royal Canadian Air Force. He and his duffel bag stuffed with poetry were sent to a radar station in Sydney, N.S. As it turned out, Irving Layton's nephew, Bill Goldberg, another lover of poetry, was also stationed there and with hardly a pause the two men started Direction, a literary magazine printed on RCAF letterhead. It rebelled against traditional Canadian poetry and adamantly secured a future for modernism.

This was the first of Souster's three poetry journals. Contact and Combustion soon followed. He also invented a frugal format for these magazines: mimeographed sheets folded in half with a couple of staples down the middle. No envelopes. No covers. No fuss. No muss. He simply scribbled subscribers' addresses on the outside and popped them into the post.

"I did enjoy the magazines; they were little centres of energy," Souster said. "Small in the scheme of things, but important to many who were looking for a place to display their work."

Contact magazine morphed into Contact Press in 1952, when Souster linked up with Dudek and Layton. The poets became known as a modernist triumvirate, cleaning out the cobwebs of Victorianism in Canada. In the early days, they met at Dudek's farm in Quebec, skinny-dipping on the Little Jesus River and religiously planning a literary revolution.

"We were for the underdogs, whether forgotten citizens or neglected writers," Souster said.

Souster's poetry focused on the ordinariness of human struggle, invisible lives shunted into the shadows. He compared the dullness of the average person's life, "well-dressed and going to work," with other people he slipped past in Toronto streets, like one woman he saw crouched in a doorway at Queen and Yonge. She had wrapped herself in cellophane and refused to abandon that spot.

"I wonder what her story is and why she stands in the cold refusing the pleas of the Salvation Army."

Until the flourishing of Canadian small independent presses at the close of the sixties, Contact was pretty well the only game in town.

Atwood's poetry collection The Circle Game won the Governor-General's Literary Award and won a star for Souster's press in 1966, the same year he co-founded the League of Canadian Poets, in an effort to break the isolation of poetry and showcase Canadian talent.

Contact Press closed down in the following year, shortly after the successful publication of New Wave Canada: The New Explosion in Poetry, an anthology of new poets.

From the publishing house Souster moved into hosting an influential reading series at the Isaacs Gallery in Toronto – a trend that has become popular in the city's current literary scene. In addition to the Canadian writers he invited to read, he introduced major American poets such as Robert Creeley, Denise Levertov and Charles Olson (even Marshall McLuhan was listed on a playbill). Today's International Festival of Authors was directly shaped by the history of this series.

In 1969, Souster's two worlds merged in an explosion of verse when he organized the Metro Poetry Festival and invited a coterie of poets to read their best work in the personal loans department of his bank.

Souster wrote thousands of poems, sometimes climbing out of bed several times a night to add a line, delete a phrase, flip around a stanza, or perhaps incorporate a dream. Friends showered him with lovely blank notebooks that he was determined to fill.

Even after going blind several years ago and requiring the aid of a writing grid from the Canadian National Institute for the Blind and an amanuensis, he published two full poetry collections: Easy Does It and Never Counting the Cost.

Souster wrote his last poem, on the subject of cancer, two weeks before his death.

"As someone who gave his life to poetry, but in no greater a way than some of my friends," he told an interviewer. "What do our accomplishments mean in the greater scheme of things? That's for others to decide." 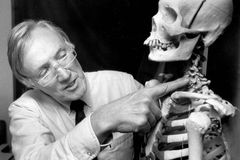 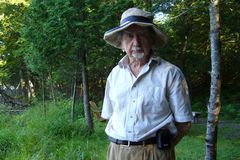