COREY MINTZ
Special to The Globe and Mail
Includes correction
Published May 19, 2017 Updated May 23, 2017

When Bryan Jackson helped open a waffle-centric brunch restaurant, Starving Artist, in 2009, Bloor and Lansdowne was a different neighbourhood.

"Bryan spent the first year of business kicking crack-heads and prostitutes out of our basement bathrooms," recalls his now wife Brittany Jackson.

The neighbourhood's imperfection was exactly what made the 850-square-foot space affordable at $2,700 a month.

After seven years of stuffing and topping waffles with eggs, bacon, peanut butter, pineapple, chicken, cheese, ham, turkey and sauces both secret and Hollandaise, the community has transformed. There are now multiple brunch spots.

"The changes in the Bloor and Lansdowne area are night and day from when we opened," Ms. Jackson says. "We like to think that we helped to turn the area into a more community-friendly hub by adding a trendy-yet-family-oriented destination spot to have weekend brunch."

Starving Artist is no longer around around to enjoy a return on its investment in the neighbourhood, though. In January, with the landlord asking for a 40-per-cent rent increase while reducing 29 per cent of the restaurant's floor space (a planned renovation was going to eat into the dining room and eliminate the patio), the Jacksons decided to close. In February, another brunch spot, Holy Oak, also closed due to a rent increase.

With no rent control on commercial real estate, restaurateurs who invest in some of the city's most depressed neighbourhoods are increasingly being priced out thanks to the revitalization they help spark.

"You help build a neighbourhood, until the point you can't afford the neighbourhood you built," says Rachel Conduit, former owner of the Avro.

When Ms. Conduit's popular Riverside bar opened in 2010, she was paying $1,600 a month. It closed three years later, when the landlord refused to accept anything less than $4,100.

"Thankfully, I haven't had to negotiate renewals at my other bars yet," Ms. Conduit says of her other businesses, Farside and Handlebar. "But if rents don't calm down, I'm very fearful."

While home buyers keep track of the market in terms of the cost of a three-bedroom house, restaurant spaces are expressed in price per square foot, plus/or including TMI (taxes, maintenance and insurance).

The strip of Queen Street West where Fidel Gastro's is located is priced around $40 to $70 a square foot, which is more than the city average of $38, but cheaper than the most expensive land, Queen between University and Spadina Avenues, where nothing goes for less than $100, according to Stephen Murphy, a real estate agent who specializes in restaurants.

"Thanks to Vogue magazine, Queen West was voted second-coolest street in the world," Fidel Gastro's owner Matt Basile says. "My rent has gone from $7,000 to just over $11,000 in four years. Eventually, it will price us out."

Mr. Murphy says there are still some areas of value to restaurateurs, such as Moss Park or St. Clair Avenue West. But even those pockets are gentrifying fast. He describes the Little India part of Gerrard Street East as "what Parkdale was six years ago."

Using the Toronto average, a smallish, 50-seat restaurant (about 1,500 square feet) would cost $57,000 a year, or $4,750 a month. And with popular wisdom dictating that rent shouldn't exceed 10 per cent of sales, that intimate restaurant needs to generate more than half a million dollars a year to maintain profitability. That's before the cost of an expensive renovation or a rent increase.

Restaurateurs additionally have to worry about property assessments from the city, Mr. Murphy says, which can raise property taxes, a cost the owner will likely offload to the tenant.

Some restaurateurs are so desperate to open in prime areas, they gamble with leases that could end up costing them thousands more a year.

"I put Figo, La Carnita, a Fox and Fiddle in [John Street and Adelaide Street]. I think it's ridiculous," Mr. Murphy says of the cost, $75 triple net, a real estate term meaning that the tenant is responsible for all repairs. If their pipes, electrical or air conditioning breaks, they fix it.

"Keep in mind that each one of those locations spent a million-and-a-half to two-million dollars in build-out, that technically you'd have to amortize as well."

Even if owners are able afford Toronto's most expensive properties, this sprawling city only has so many dense, high-foot traffic areas.

"I've got five different groups that have mandated me to find them a place in Yorkville and I just can't," says Mr. Murphy, of the posh $80- to $100-per-square-foot enclave. "So I'm going to existing operators and saying, 'Here's some cash. Would you mind moving?' But when you approach someone with that, all of the sudden they think there's gold in their restaurant and they triple the price."

Many restaurants dread renewing their leases, knowing they may have to pay for their success. When Ed Ho opened Globe Earth in Rosedale in 2009, the tony neighbourhood welcomed him. He liked the location and its wood-burning oven. But as the end of his five-year lease approached, the landlord wanted to jump the rent from $33 to $61 a square foot (TMI included). In the 10 years prior to Mr. Ho taking over the space, there were nine different tenants.

"At the end of the negotiation, I basically realized I would be working for the landlord and that there was no way forward that made economic sense," said Mr. Ho, owner of Globe Bistro on Danforth Avenue.

A pioneering restaurateur can always save money by moving further away from urban density. But how far is too far, before customers won't come to you, or the neighbourhood won't or can't support your kind of restaurant?

Foxley is the restaurant that started the boom on Ossington Avenue in 2007 when there was no nightlife on the strip. Chef/owner Tom Thai leveraged cheap rent to try something fresh, his signature South Asian styles of ceviche, in a location that may not have been popular, but was close enough to other dense or commercial districts. With the street now vibrant and busy, Foxley is only still there because Mr. Thai negotiated a 15-year lease.

Whether that's good or bad, the one thing that residents, landlords and restaurateurs agree on is that these restaurants are harbingers of change.

"When you see a restaurant or cafe open, within the next couple years a condo development is gonna happen," says Suzanne Barr, chef/owner of Saturday Dinette. "It's a sign of a neighbourhood that is on the cusp of something really great. We were lucky enough to get in when we did and be a part of that."

Since opening in 2014 at the corner of Gerrard Street East and Logan Avenue, her restaurant has become a lively community hub, locals dropping in not just for weekday meals, but during off-hours to coo over Ms. Barr's newborn son.

"We're the epicentre of any new neighbourhood. We should be able to reap the benefits." Why restaurant veterans are ditching Toronto for Hamilton
March 21, 2018 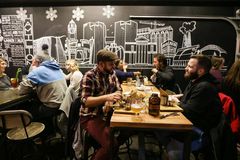 Hot real estate market forcing landmark musicians out of Toronto
April 15, 2017
Residents of Toronto’s Kensington Market concerned as Airbnb moves in
April 28, 2017
Follow us on Twitter @globeandmail Opens in a new window
Report an error Editorial code of conduct
Due to technical reasons, we have temporarily removed commenting from our articles. We hope to have this fixed soon. Thank you for your patience. If you are looking to give feedback on our new site, please send it along to feedback@globeandmail.com. If you want to write a letter to the editor, please forward to letters@globeandmail.com.
Comments