Mayor Ford and his brother, councillor Doug Ford, broadcast their weekly radio show live from the CNE fairgrounds Sunday in their first on-site show. The show followed reports in The Globe and Mail and Toronto Star that some members of the mayor's staff have been questioned by police about a man named Alessandro Lisi, a regular late-night companion of the mayor's, and attempts to retrieve the alleged video.

But on Sunday, the mayor refused to answer any questions from reporters. When asked by The Globe and Mail if he knew about the investigation he replied "no comment." Mr. Ford later told the Toronto Sun that the reports are "not accurate," adding that Mr. Lisi is a "great guy and he is straight as an arrow."

Mr. Lisi, known to staff by the name Sandro, has been known to ferry the mayor to and from events in his black Range Rover, including to the Garrison Ball in February. He also appeared the morning after reports first surfaced of the alleged video outside Mr. Ford's Etobicoke home, running interference with the pack of reporters seeking comment.

According to people present during Toronto Police questioning, investigators asked former staffers questions about Mr. Lisi, and about attempts by Mr. Lisi and Ford staffer David Price to retrieve the alleged video.

Councillor Ford also refused to take questions on the reports. The day before, however, he told AM640 that the reports are "just another attack."

Instead, the duo focused their discussion on the upcoming special council meeting the mayor called for the end of August to decide how to fill Doug Holyday's soon-to-be vacated council seat, saying it's up to the people of Ward 3 to say if they'd prefer a by-election or an appointment.

"It's really irrelevant what you guys may think, what I think. It's [about] the people that are affected by it," Mayor Ford said, but added that he's sure they will agree a by-election is the best option.

"The only fair way of doing it above-board with a clear and transparent process is a by-election."

Mayor Ford arrived an hour into the show after making a trip to Niagara and St. Catharines the day before.

The Mayor and his brother also promoted the CNE and took questions live from a small group of supporters who gathered to meet the pair. After the show ended, the Mayor took his two children for a tour of the CNE grounds, stopping to try his hand at the ring toss and riding the Polar Express ride with his son and daughter. 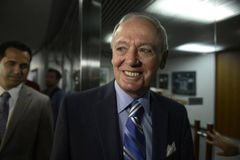 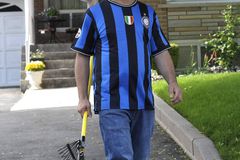 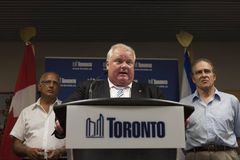