Rob Ford's recipe for stopping the city hall gravy train he's railed against for a decade centres on slicing council in half and not replacing half the city staff retiring every year. It's a key plank in the first financial platform of someone who has made a name for himself as a penny-pinching, tough-on-waste mayoral candidate.

But throughout the campaign, Mr. Ford's critics have said his figures don't add up, and that a cost-saving plan hinging on the whims of retiring staffers wouldn't be sustainable in the long term - especially if, as mayor, Mr. Ford doesn't want to take a cleaver to the city's police force, transit drivers, emergency and social services.

The Etobicoke councillor defended his figures in a wide-ranging discussion Monday with The Globe and Mail's editorial board as he prepared to unveil his first detailed financial platform - which was published online late Monday night, in keeping with the YouTube video he used to release his transit plan earlier this month.

In a video and policy paper, Mr. Ford says his plan will save the city $2.8-billion over four years: In addition to cutting council and allowing attrition to get rid of 3 per cent of city staff a year, he also plans to find $1.7-billion in "efficiencies" over four years. The campaign statement made no mention of where that money would come from or what services would be cut, but noted that much of the growth in City Hall's budget has been due to "wasteful spending that comes from poor purchasing practices and ineffective management."

As mayor, Mr. Ford would also introduce a "Save our City" program that would encourage residents to submit their own ideas on how to save the city money - and would reward those with viable plans. While the campaign projected this proposal will save $61-million over four years, it made no mention of what some of these savings might be.

Mr. Ford estimates cutting council in half will save $9-million, plus an additional $6-million in "indirect costs" incurred from the "burden on City Hall staff to respond to councillors' needs, print reports, provide and maintain office space, etcetera." His aid said in an earlier discussion Monday that each of the remaining 22 councillors would receive additional staff to make up for the doubled workload, however.

Not replacing half the city employees that retire every year would save $1.1-billion, Mr. Ford's campaign estimates.

Mr. Ford has promised to axe the city's much-despised land transfer tax and vehicle registration tax, as a balm for Torontonians who've "been hit with every tax known to mankind." Those two sources of revenue bring in upwards of $230-million annually. The difference, he said, would be made up by slicing city council in half, from 44 councillors to 22, and through attrition: The city would simply stop replacing half the people who retire every year (roughly 3 per cent of the city's total staff).

According to Mr. Ford's campaign, this would save the city $1.1-billion over four years. Mr. Ford added he hopes to save money by contracting out some city services.

"The majority of our operating budget's made up of salaries and wages. You could save millions of dollars," he said, adding that his attrition plans don't include police officers and "not necessarily bus drivers. "No, I'd have to look at the TTC, but not the police. But there's a lot of areas of waste and I'm going to go department by department and review."

It's a good idea in principle, outgoing budget chief Shelley Carroll said. And it's something the city is trying to do already - under current cost-restraint measures, any new positions, and attempts to fill newly vacant ones, must be approved by the city manager.

But city hall is hamstrung when it comes to just how much it can trim: By far the largest tranche of municipal operating funds go toward Toronto Police Services. Far from taking officers off the street, Mr. Ford has vowed to add 100 more. Another huge portion of city staff are the men and women who drive streetcars, buses and subways in an already stretched public-transit system. Thousands more are front-line workers in provincially mandated services the city is legally obliged to maintain - failing to replace them would be breaking the law.

Yes, it's possible to save millions of dollars a year by simply letting people retire and not replacing them. But it's not something the city has extensive control over: You can't dictate when people retire and, as a long-term money-saving strategy, it may not be sustainable.

"Yes, it's possible; yes, you can do it," Ms. Carroll said. "The issue is the potential savings in it. And I think some mayoral candidates may find … the potential might not be what you think it would be."

It's also not clear exactly how much the city would save by slicing council in half, an initiative that wouldn't come to fruition for another four years: If the salaries, benefits and budgets for all those 22 councillors plus their staff were cut, it would free up about $9.3-million - almost exactly enough for the 100 additional police officers Mr. Ford wants to put on the street. "I don't think you can ever have enough police officers," he said Monday.

But campaign manager Nick Kouvalis said each remaining councillor would get additional staff to make the added workload manageable, which would eat into those savings.

During the editorial-board meeting, Mr. Ford tackled suggestions that the numbers he brings up to illustrate off-repeated points are inaccurate: The $6-million figure he cites for Jarvis Street bike lanes is the global figure for all repairs to that street (the bike lanes themselves cost $65,000), but he maintains that road work would be unnecessary were it not for the cycling infrastructure.

The spectre of one million newcomers flooding the city in the next decade, which is actually a projection referring to population growth in the entire region, would affect Toronto because "a lot of them come to the 416 because of the services we offer. … Is it here, or just outside of Toronto? Obviously it's going to affect the city of Toronto."

"I don't know where we're going to put these people. Of course I don't have any control over it. All I said is that in a perfect world, I think we should try to take care of the people we have here first instead of opening the doors and welcoming everyone and saying everything's going to be fine and dandy, when it's not. They're going to get a surprise when they get here. … Let's lay the cards on the table."

Mr. Ford repeated that if the province doesn't see things his way and agree to transfer the already-committed $3.7-billion to his vision for subways rather than Transit City, the plan wouldn't happen. He added that if it's too expensive for the city to renege on contracts with Bombardier, they would just stick to the current plan.

His vision for the city? "A clean - and I emphasize the word 'clean' - city."

"We have to clean the city up, and create an atmosphere for businesses to come here."

Mr. Ford was confident and composed during the 70-minute meeting with the editorial board - pausing, at times, to wipe his face with a napkin or fold his hands over his stomach and look skyward as he listened to a questioner or to a member of his campaign team as they jumped in to clarify or underscore his remarks.

Mr. Ford added that he's confident he'll be able to get the majority he needs in council to follow through on his agenda: "I'm seeing almost the exact same thing of what happened in the early '90s, after the Bob Rae days. People were very upset."

"We'll have the 22 votes," campaign manager Nick Kouvalis interjected from his seat at Mr. Ford's right. "The fight now is, will we have two-thirds? We're close." 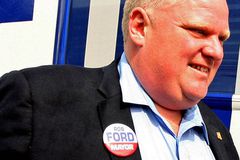 Flaherty's endorsement of Ford catches some off guard
September 24, 2010

Smitherman relying on $100-million from province to balance budget
September 27, 2010 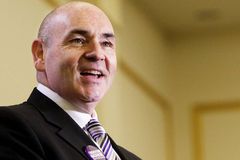