Hawksley Workman's new album Old Cheetah is an animal of eclectic, extroverted rock, but just months after the disc's release, the shape-shifting Juno-winner is looking to change things up. We spoke to him in Toronto, about Bruce Cockburn, blowing snow and turning 40 years old.

Your new album Old Cheetah comes after Thrash Rock Legacy, a record from 2014 you made with Mounties. What effect did that band project have on this solo album?

I was so high on the excitement of Mounties. I didn't want to lose the momentum of it. It was nice to hear the songs on the radio and it was nice to turn 40 being in a cool band. With Mounties and also my one-man play The God That Comes, I wanted to continue that boozy wildness. Those two projects had a lot of recklessness on them. I didn't want to lose that phase without adding one more thing.

And now with Old Cheetah, is that phase closed?

I feel like it is, even though Mounties are starting a new record in a couple of weeks. But I feel like, right now, I want to build a record on piano, like building a cabinet. I've come around to the fact that I am sort of cabinet maker. I think I've been avoiding that.

I think I could use a bit of a change. There's a guy who snow-blows my driveway. On the road, when I'm feeling I need an exit strategy from this kind of life, I think of him. He's old now. At some point he's not going to want to blow driveways. His job appeals to me. The smile on his face when he's blowing my driveway at 5 o'clock in the morning – he should be paying me. It looks like he's got it figured out.

You're not thinking of retiring, are you?

I will have a long career. My hero is Bruce Cockburn, and I realize my career, in a smaller way, resembles his. There's been lots of turns. I feel like I've disappointed my audience lots of times. I've disappointed myself. I've been excited by certain things, and I've made sonic changes when maybe they weren't necessary.

Did you read Cockburn's memoir?

I did. It freaked me out. He's so in touch with his intentions. I feel like I'm lazy some times with keeping touch. We judge ourselves by our intentions, but others judge us by our actions. Cockburn can be judged pretty accurately – he's an actions guy. I feel like a certain amount of my life is denying parts of my truth. And I feel like that's going to change.

Does this have anything to do with turning 40?

Well, it's new young bands that keep me going into the studio. I still feel I'm in competition with them. But I don't feel like I can carry that young man's baggage any more. Young people want to change the world, just like I did when I moved to Toronto when I was 18 or 19. Now I feel like it's time to step back and be grateful for what I have for myself, and not to live in this state of perpetual competition. That aggressiveness feels like it's not becoming of somebody my age.

The Winter’s Tale and Rudolph: What to do in T.O. this weekend
November 13, 2015
Review
See the chef, the food and the room at Lamesa
November 9, 2015
Toronto men’s shop has three mottos: simplicity, minimalism and ease
November 6, 2015 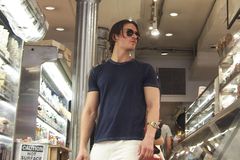