A group of Ryerson University engineering students who attracted the anger of school officials over an initiation ritual gone wrong will not be punished after student leaders met with administrators to apologize, promising not to repeat their half-clothed antics.

A so-called spirit-building exercise for future orientation leaders ran afoul of school policies Thursday when students, many of whom were wearing little clothing, were encouraged to crawl commando-style across a slushy pond. The school's president was outraged.

The apparent hazing exercise drew widespread attention after a blogger posted video online of dozens of Ryerson engineers, who had earned spots among the next crop of student frosh leaders, snaking their way on hands and knees across a slushy pond at the heart of campus – many stripped down to their underwear – egged on by more senior students playing the role of drill sergeants.

Ryerson president Sheldon Levy expressed "shock and anger in the face of this departure from dignity" in a strongly worded statement released Saturday. "There is no excuse for the completely unacceptable behaviour that took place at the event," he said.

Also Monday, representatives of the Ryerson Engineering Student Society (RESS) met with Ryerson administrators for what a university statement described as "a very good discussion" aimed at "education and prevention, not punishment."

"RESS acknowledged that the activities that took place on Thursday are unacceptable, took full responsibility, and apologized to the Ryerson community," the statement reads. "RESS has already begun developing new guidelines and best practices for their organization and have committed to working with the university to make sure their policies and procedures are in accordance with Ryerson's to ensure incidents like the ones on Thursday never happen again."

The students' romp through downtown Toronto is a tradition dating back seven years, often including silly costumes, dancing and forming conga lines (but not always a slushy crawl) as a way of "growing bonds," according to RESS president Rose Ghamari. "Its intention is really only to be a demonstration of spirit and enthusiasm for engineering. Our intention was never to be hazing or anything of the sort," she said.

But she acknowledged this year's event, "started to get out of hand," and that "there are certain things that we know that happened that were clearly unacceptable."

In one incident caught on video, one of the male leaders in charge of the event appears to slap the buttocks of a female student as she crawls on all fours. A university spokesman confirmed the two students are friends, and the female student doesn't plan to pursue any discipline.

But Ms. Ghamari stressed the RESS does "not endorse any sort of physical contact" and will address the incident.

Despite agreeing the gathering went too far, Ms. Ghamari insisted no one was pushed to participate, and she has heard no complaints from anyone involved.

"It's not mandatory for [anyone] because you have already been selected as a leader," she said, noting only about half of the newly chosen student leaders took part in the optional event. "No one was asked to dress in a certain way. … No one is asked to take off any clothes."

Several people claiming to have participated also defended the event in comments posted online, stressing that they considered the event wholly optional, and did not feel pressure. 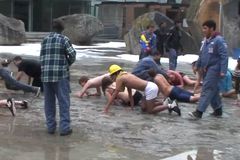 Automatic condemnation of hazing is not always warranted
March 25, 2013 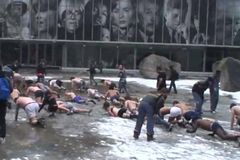 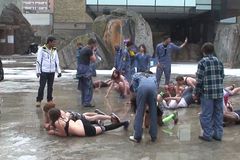