The live music scene in Toronto is nothing if not fluid. The latest? The Cadillac Lounge's location in Parkdale is up for sale, and the fate of the gritty Graffiti's Bar & Grill and music room in Kensington Market is also in doubt. On the flip side, an overhauled El Mocambo is set to reopen next spring. The man with connections to those three venues is the gregarious Sam Grosso. The Globe spoke to the 49-year-old club owner at his west-end Cadillac roadhouse.

Unlike other club owners who are being squeezed out of their venues by high rent, you own this building. So why are you selling the building and shutting down the Cadillac Lounge?

Owning the building is great. The mortgage is a fraction of what the rent would be. I wouldn't be able to afford the fair market rent here. What I do is a niche thing, with country music and rockabilly. I opened this place in 2000. I was behind the bar, working six or seven nights a week. It was always a Saturday night. But life happens. You meet a lady, and then the next thing you know you're getting married, and then you're having kids. You're trying to maintain this crazy lifestyle by running a live music bar and a restaurant and a patio bar and a special events place. I'm trying to be a dad and a husband. I'm wearing a lot of hats.

Take off a hat then. You're sitting on all this equity. Can't you afford to hire someone to run the place?

I tried that, back when everything was humming on eight cylinders here. A big Cadillac running down the road, nothing could stop me, right? We had a cottage in Prince Edward County, so we thought we'd buy a house there and live full time and come to Toronto on the weekends. Hire a manager. Slow things down a bit. But as soon as I did that, after a year, sales started dropping. I let the manager go, and began managing again myself. I've been doing that for more than three years now. It's hard. In this business, you have to focus. You have to work 10 or 12 hours a day.

People expect you to be here, right? They want to see you when they come in.

Absolutely. This kind of place is personality driven. I'd love to own a place where I didn't have to be there. But that's not the way it is with me. For a short while I owned the Cadillac and Graffiti's at the same time. It drove me crazy. I have to be here. I talk to people. I meet new people and I see old friends. It's natural. It comes easy to me.

They are. We sell out. But it's not easy to do those shows. You have to know the bands, and you have to deal with them directly. Once a booking agent gets involved, forget it.

You've been outspoken about the unwillingness of young people to pay for live music. Have you considered that they simply don't have the money?

I understand that. You can't blame them. The rents they pay are expensive. But you can sit here on a given Friday or Saturday night, and watch 100 people stop at the door. The cover could be as little as $10, and they won't pay. Some of them don't even know the cover. They see a guy at the door collecting money, and they walk right out.

I bumped into you at Graffiti's last week. The rumour is that it will close on Jan. 1. As the former owner and the one who opened the place in 1995, what are your thoughts on the possibility of the venue shutting down?

It's unfortunate. That's where it all started, with that little 30-seat bar. The speakers hanging from the ceiling are the same ones I put up 22 years ago. Justin Rutledge started there. Serena Ryder played there. Jeff Healey would drop in. We'll see what happens though. From what I understand, it hasn't been sold yet.

Let's talk about the El Mocambo, which you owned for a short while. Back then, you told me about your ambitious renovation plans. Yet you sold it in 2014 to entrepreneur Michael Wekerle. Why?

I didn't have the money to stay in. I mean, Michael's already [many millions] into it, after buying the building for $3.7-million. And he's not finished yet.

Does he know what he's doing?

I think he does. He's crazy as can be, but he has this way of thinking outside the box. He didn't buy the El Mocambo for the real estate. He bought it for content.

You're talking about his team branching out into artist and record label services, with a recording studio on site, right?

Michael can sell that El Mocambo brand over and over and over again. But they'll also bring in bands to play on the second floor. They'll get 400 to 500 people in and charge $100 for an act that would normally play a bigger hall. But they're playing an iconic venue, and the El Mocambo will record those shows and make money off that as well. I truly believe it's going to be the best venue in North America.

Is Wekerle paying you to say that?

No. But once in a while, he buys me a couple of beers. I like that. I deserve it, you know?

Ontario pledges an extra $4-million for Massey Hall revitalization
August 9, 2017
Exploring the history of Toronto through its brilliant architecture
June 30, 2017 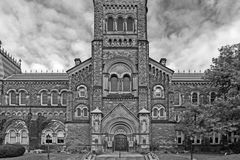 Great Hall renovation shows Toronto is finally learning to appreciate its past
August 19, 2016
Follow Brad Wheeler on Twitter @BWheelerglobe
Report an error Editorial code of conduct
Due to technical reasons, we have temporarily removed commenting from our articles. We hope to have this fixed soon. Thank you for your patience. If you are looking to give feedback on our new site, please send it along to feedback@globeandmail.com. If you want to write a letter to the editor, please forward to letters@globeandmail.com.
Comments