The neon records that adorned Toronto's legendary Sam the Record Man store might spin again one day, but the chances they will light up Yonge Street are slim.

A Toronto committee voted 7-4 Tuesday to let Ryerson University off the hook from a deal it signed with the city in 2008 that required the school to restore the sign to its former home on Toronto's main drag – now the site of the university's new student learning centre.

Under a compromise, the city will enter into a new agreement that asks Ryerson to find another location for the sign and report back to council in a year.

The proposal still requires the approval of council.

Councillor Kristyn Wong-Tam, whose ward includes the Sam's site and who proposed the compromise, said Ryerson will be compelled to work with the city to find a suitable alternative for the landmark – but said ultimately its resting place could be in some future museum of Toronto history or Canadian music.

"It could be somewhere else on the Ryerson campus, probably close to the vicinity or it could be further," she said after the vote. "We have heard all sorts of suggestions from the general public."

Such suggestions did not sit well with members of the public who came to city hall to express their dismay that a piece of Canadian music history could be lost.

Juno Award-winning jazz musician Jane Bunnett said not returning the sign to its former home would be "a total insult to the music industry all over Canada."

Several speakers and councillors on the Toronto East York Community Council reminisced about their teenage trips to the record store and the influence its owner, Sam Sniderman, had on a fledgling music scene.

Ryerson vice-president Julia Hanigsberg, whose first job was as a cashier at Sam's, presented the university's alternative to restoring the sign – something it called a "commemorative insert" that consisted of a plaque, a replica of the sign in the sidewalk and a website.

The university argued putting the sign up in its original location, as spelled out in the 2008 agreement, was not feasible for several reasons, including a dwindling pool of neon sign experts, maintenance and energy costs and structural risks related to mounting requirements.

Several councillors said the university's alternative did not do justice to such an important site. "I don't think a plaque in the ground and some coloured concrete is enough," Councillor Mike Layton said.

Others pointed out that it would cost just as much to light up the sign and maintain it no matter where it was located and dismissed concerns raised about mercury in the sign, noting the chemical is found in most lighting.

Councillor Josh Matlow, one of four committee members who voted to hold Ryerson to its original 2008 deal, wondered why the university had gone so far in its planning without looking for a suitable way to incorporate the sign into its building. He also lamented the city's general failure to preserve and celebrate its heritage.

Under the proposed new deal, the university will be allowed to go forward with its site plans for the learning centre and will report back in one year on efforts to find a home for the sign. In the meantime, it will have to continue to store it.

Asked if the sign will ever see the light of day, Ms. Wong-Tam said the city will still have an agreement compelling Ryerson to find a site.

If the university does not come through, she said, there is always legal action. 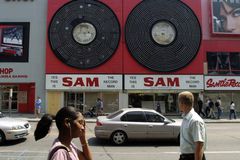 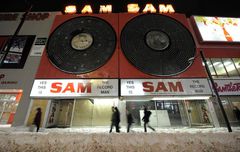