Mark Saunders was finally sworn in as Toronto's new police chief, taking over from a man entering federal politics and inheriting a range of thorny issues, from the controversial practice of "carding" to the escalating costs of policing.

As people lined the balconies at police headquarters and pressed against their office windows to watch, Chief Saunders – born in England to a Jamaican family, now Toronto's first black police chief – promised on Wednesday to hold the force to exacting standards on costs and community relations.

In the month since he was named as the new chief, succeeding Bill Blair – who has Liberal Leader Justin Trudeau's endorsement as a candidate in Scarborough Southwest – Chief Saunders has been the subject of intense scrutiny over his approach to carding, in which officers question and take down information from people who aren't suspected of a crime. He said last month he didn't plan to end the practice, but in his eight-minute speech on Wednesday, he emphasized that he expected police interactions with the public to be "smart, surgical" and positive.

Such interactions, the 52-year-old chief said, "collectively define how the Toronto police service is seen by the community. They determine whether or not people are willing to support us, work with us." He added that a new pilot project started this week, which has 100 officers wearing cameras that record them on the job, will help bring transparency.

"Policing is at a crossroads," he said. "The challenges have never been greater, but so too is the opportunity to examine everything we do; how we do it, why we do it, should we continue to do it; can we do it more effectively and efficiently?"

Police board chair Alok Mukherjee said policing is in an era of transformation, and the board has faith in Chief Saunders' "respectful leadership style."

"He is known as approachable and genuine," Mr. Mukherjee said.

In his speech, Chief Saunders also promised to go to great lengths to save the city money by reorganizing the force, saying police costs have seen "massive growth" across Canada in recent years.

"The cost of policing is one of the most pressing issues confronting governments across the world," he said. "We will examine everything we do," he added, pointing to some specific police services that he believes could be changed, or where civilians could take over some duties currently performed by uniformed officers.

Chief Saunders is a lifer on the Toronto force. After moving to Canada as a child and growing up in Milton, Ont., he joined the force out of high school, taking three decades to move through its ranks. He spent nearly a decade as a homicide detective, investigating some high-profile cases, including the Holly Jones murder, and he later returned to lead the homicide division.

Later, as head of the Emergency Task Force, he led the response to the 2009 shutdown of the Gardiner Expressway by Tamil protesters and the 2012 Occupy Toronto demonstrations.

He is well-known to fellow officers, having worked on different squads and investigated murders in police divisions across the city, but before being named chief, he had a low public profile. To the police board, which was in charge of the hiring process, he was an "unknown quantity" among higher-profile candidates, said Councillor Shelley Carroll, who sits on the board.

The board advertised for a chief who would change the service, but Chief Saunders's plans for the force aren't yet clear. Candidates were asked, in interviews, to explain what kind of change they would bring, and Chief Saunders's answer "blew some people away," Ms. Carroll said at the time.

Speaking publicly after his appointment, the Chief said he was open to talking with the community, but wouldn't bring major change overnight.

Mr. Mukherjee said there's "nothing unusual" about the month-long delay before the swearing-in ceremony. The wait was partly due to negotiations over the new chief's terms of employment, he said. The previous chief, Mr. Blair, earned $349,259.68 last year, up about $15,000 from the year before, according to the provincial Sunshine List.

New police chief is a strong leader, but changing the force won’t be easy
April 20, 2015 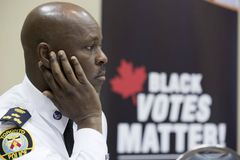 Toronto police start year-long pilot project to test body cameras for officers
May 15, 2015
Follow us on Twitter @globetoronto Opens in a new window
Report an error Editorial code of conduct
Due to technical reasons, we have temporarily removed commenting from our articles. We hope to have this fixed soon. Thank you for your patience. If you are looking to give feedback on our new site, please send it along to feedback@globeandmail.com. If you want to write a letter to the editor, please forward to letters@globeandmail.com.
Comments