Ontario is pledging to go ahead with its own vision for a short new subway in Scarborough, ignoring the wishes of Toronto City Council and dismissing politicians who are "subway champions" but refuse to come up with money.

Provincial Transportation Minister Glen Murray told a news conference that they were prepared to pay $1.4-billion to extend the current subway 6.4 kilometres from Kennedy station to Scarborough City Centre, saying that the city's proposal for a longer subway on a different route would cost upward of $3-billion.

The announcement Wednesday by Mr. Murray was met with an unhappy response from Karen Stintz, chair of the TTC, and sniping from Ottawa that "repeated" press conferences by Mr. Murray were "counterproductive."

Mr. Murray was combative during a lunchtime news conference, lobbing withering criticism at Mayor Rob Ford. "The mayor has been mayor now for almost a full term, he hasn't delivered five cents for a subway yet," he said, at one point putting a dime on the podium and saying that was more than Mr. Ford had contributed. "… He said, 'I'm going to fund subways.' He hasn't done that."

Mr. Ford, who made an appearance at a community event in Scarborough Wednesday night, nonetheless claimed the subway announcement as a personal victory.

"I want to thank the Liberal government for helping me out," he told reporters. "I campaigned on subways. I was the only one that stuck to my guns. The people of Scarborough said they wanted subways.

Asked about the shots sent his way by Mr. Murray, the mayor said he would not respond, suggesting Mr. Murray might still be upset by the Liberal's loss in Etobicoke in the recent by-election.

The proposed extension would run largely along the route of the aging Scarborough Rapid Transit, most of it above ground, and it will require years of shuttle buses during construction. It would be operated by the TTC, whose CEO quickly raised questions about the route.

Andy Byford said that he was not presented with the plan until late last week. Having seen only "high-level" maps and documents, he has questions about the viability of the curves and inclines.

"Our initial view … is that this is right on the margin of design limits for a subway," Mr. Byford said late Wednesday afternoon. "We want to have a detailed look at this and that's what we now intend to do."

He said it would likely require "months of intensive, informed evaluation, because you've got to be certain that you are getting the tolerances right."

The area was originally going to get a light-rail line to replace the SRT. After much criticism from Mr. Ford and some councillors, the provincial transit agency Metrolinx said this summer that it needed clarity on what the city wanted. Council voted in favour of a 7.6-kilometre subway to Sheppard along a different route than the SRT.

On Wednesday, Mr. Murray was firm that council's stated preference for a different route was not relevant. Pressed repeatedly over whether Toronto council would need to back the new plan, part of which will be built using city land, Mr. Murray declined to answer directly. "We'd love to have their co-operation," he told reporters.

Mr. Murray could not be specific about how quickly construction could begin, only one of the questions left unanswered.

The plan currently has "a minimum" of two stops, with Mr. Murray saying that more could be added.

He also said that the route could be extended if other levels of government come to the table with money.

The subway extension will add up to 14,000 riders an hour during peak period to the TTC system, the province says. That influx would force the cash-strapped transit agency to accelerate unbudgeted upgrades to the signal system along the Bloor-Danforth line, at a cost of hundreds of millions.

Scarborough Councillor Glenn De Baeremaeker said progress toward even a shorter subway line in his region is "spectacular."

The councillor, who also is a TTC commissioner, called it a "huge, huge, huge victory for the people of Scarborough, for the City of Toronto."

Councillor Gord Perks, a strong advocate for light rail, said far from ending the debate, Mr. Murray's announcement shows the province is unwilling to build the only subway extension that has the approval of council.

"Today's press conference is a clear indication that the province and the city are unable to complete a deal that meets council's requirements," he said. "So the only thing on the table at this point is the light-rail agreement. Glen Murray just said no to city council."

Ms. Stintz, meanwhile, was caustic about the way the city was cut out of the loop, saying the Ontario government had not discussed the plan with council.

"It's their money, it's their call, it's their project," the TTC chair said of Wednesday's announcement. "The city council approval and our financial contribution was based on a subway that goes to Sheppard."

Mr. Murray shot back that his government was the only one putting up any money.

"We have subway champions coming out of our wazoo, we don't have subway funders," he said. "We have conservatives leading city hall, we have Conservatives at the federal government. This city elected a lot of Conservative MPs, federally. [The province] has a leader of the opposition who claims to want to deliver subways. Given how many conservatives there are at the three orders of government, it's amazing they haven't delivered any real commitment for subways. 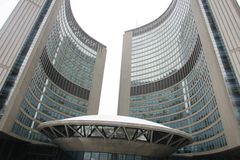 Facing skilled staff shortage, city hires temp workers
September 3, 2013
Follow Oliver Moore and Elizabeth Church on Twitter @moore_oliver @lizchurchto
Report an error Editorial code of conduct
Due to technical reasons, we have temporarily removed commenting from our articles. We hope to have this fixed soon. Thank you for your patience. If you are looking to give feedback on our new site, please send it along to feedback@globeandmail.com. If you want to write a letter to the editor, please forward to letters@globeandmail.com.
Comments