Hundreds of children are waiting for as long as an hour for school buses – and missing valuable classroom time – as several districts in the Greater Toronto and Hamilton areas increasingly struggle with a shortage of drivers.

Bus delays are not uncommon at the start of the school year and the issue tends to be resolved by October. But school officials say the driver shortage has grown so dire that months into the academic year parents are scrambling to get their children to school, with some arriving well after the morning bell. Some students are also left waiting in gymnasiums at the end of the day for a bus to take them home.

"This is significant; it's impacting instruction and parents significantly," said Janet McDougald, chair of the Peel District School Board. "It's got to have Ministry [of Education] involvement … so we can solve this. I don't think they understand the fallout of what's happening here, and the negative impact it's having."

She added: "We need the Ministry to show some leadership on this."

At Ms. McDougald's board, about 1,500 students are affected during the morning commute and 1,500 after school. The delays are anywhere between 20 minutes up to an hour. Some children are not arriving until morning recess. One trustee, Stan Cameron, was told by a parent that his daughter missed a high-school exam after waiting for the school bus for more than an hour. The student's parents eventually called a taxi and she was able to write her exam during the lunch break.

The Dufferin-Peel Catholic District School Board, as well as public and Catholic school districts in Halton and Hamilton, say that hundreds of their students have been hit by a bus-driver shortage. Some drivers are doing multiple runs to make up for the shortfall.

Those close to the situation say bus operators are challenged in recruiting and retaining people to a job that involves a lot of responsibility for student safety, yet pays only slightly above minimum wage and is part-time work.

"It's not just a simple task of getting behind the wheel and driving a bus," said Tom Howe, manager of Student Transportation at Peel Region. "There is a lot of training. There is a lot of responsibility. And there isn't a lot of pay."

Mr. Howe described the delays in his area as "significant," and some have indicated that it could get worse unless the government addresses the wage issue.

Ministry of Education spokeswoman Heather Irwin said in an e-mail statement that the government was aware the driver retention issue was "causing concern and frustration" in some communities. She said the government was working on a "new vision" for student transportation in the province that would involve public input.

Further, the government recently provided $60-million over two years to support recruitment and retention of school-bus drivers, she added.

But Todd White, chair of the Hamilton-Wentworth District School Board, said the infusion of money is a "temporary fix." He said he was concerned with how the government would manage the situation long term.

In his area, about 800 public school students and 325 Catholic school children are affected by the driver shortage. "Some students do miss some class instructional time, which is something that's obviously a major concern for us. And it has been since the beginning of the year," he said.

Toronto school boards say they have not been hit by a driver shortage. The two boards came under fire last school year after thousands of students were stranded because of a driver shortage. Ontario's Ombudsman was called to investigate and found that the public and Catholic boards failed to pay attention to early-warning signs that dozens of bus routes had no drivers, and as the situation worsened, they did not adequately warn parents.

Measures have since been put in place to prevent another bus-driver shortage this year and Kevin Hodgkinson, general manager of the Toronto Student Transportation Group, said any delays have been the result of traffic, and not due to a driver shortage.

Parent Adriane Franklin, who lives in Mississauga, said she would have hoped the issue around shortages in her region would have been resolved by now. Ms. Franklin, the school council chair at Queenston Drive Public School, said one of the six buses at her school has not had a driver. About 60 children are affected, she said. They arrive at school 20 minutes late, and sit in the gym for 45 minutes after school waiting for a bus to pick them up.

"It's incredibly annoying. It's not fair to those kids," she said.

"Obviously, we don't have enough bus drivers. But I don't know how you resolve that," she added. "The Ministry said, 'We've given more money to transportation and we're looking at a new vision for next year.' Well, that doesn't help us today. It doesn't feel like equal public education when some kids are missing part of the learning day." 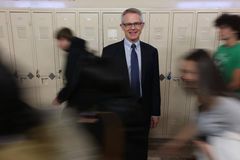