By the time he was eight years old, Salah Alaid could recall four distinct chapters of his life: the home his father built in Damascus, an escape to Jordan, some "boring" years in a refugee camp, and then starting school at Rose Avenue Junior Public School in downtown Toronto.

He had missed about two years of school when he arrived last year, but what most worried his teachers was how often Salah, normally soft-spoken, would lose his temper. It was an assistant teacher, the boy said, who first began to understand how much his memories "distract" him. For example, he had watched as his uncle was killed.

"She likes to talk with people," Salah said. "She listens to this stuff."

All Canadians await the arrival of 25,000 Syrian refugees, but few more than school staff, who bear a huge and unique responsibility in easing their passage into Canadian society. Many child refugees have not only lived through violence, but have missed years of school and medical care. Federal funding will help hire new teachers and school workers to meet their needs. But staff at schools such as Rose Avenue know that regardless of job title, they all share the sensitive task of forming some of the children's, and their parents' first close ties in Canada.

Reena Soin, who is currently teaching English as a second language to Salah's younger brother, said there are often obvious differences between children who arrive as immigrants and those who come as refugees.

"I know we've had children from North Korea [for whom] a period of their life was just spent running, living illegally, living in fear," she said.

The children had been taught to say they were from South Korea and they refused to admit otherwise, even once safely in Toronto, she said. "You can't sit down and say to them, 'What's going on here?'" Ms. Soin said. "It takes time."

The federal government's plan is for the last of the 25,000 refugees to arrive by the end of February, according to the revised timetable announced Tuesday. Part of the focus will be on admitting families, many going directly to 36 identified "destination" cities, meaning lots of children are on the way.

"Children spend most of their lives in schools, and so schools are critically important in terms of making parents feel that they have become part of the community," said Debbie Douglas, executive director of the Ontario Council of Agencies Serving Immigrants.

Ontario's authorities haven't yet settled on final funding numbers with their counterparts in Ottawa, said a statement from the Ministry of Education. The province will also contribute extra to the Syrian effort.

"With the added resources from both ourselves and the federal government, we can settle all the Syrian refugees we get," the ministry said.

It's unclear who will be hired in Ontario and elsewhere with new funding. Aside from ESL classes like Ms. Soin's, the Toronto District School Board already offers special classes at 53 schools for newcomer students aged 11 to 18 who haven't regularly attended school before. Another key kind of staff is settlement workers, who specialize in helping newly arrived families and have long been employed at certain schools in Ontario, British Columbia and other provinces.

Before refugee children are registered in public schools, they often benefit from an in-between stage. In Toronto, the TDSB has two newcomer reception centres.

In Manitoba, newly arrived children immediately spend their days in a classroom-type setting while their parents find permanent housing, said Rita Chahal, executive director of the Manitoba Interfaith Immigration Council. They learn what school will be like and are encouraged to talk about their experiences so far. The staff, after getting to know the children, later work with their schools and help with parent-teacher interviews, Ms. Chahal said.

"That's one of the first things we try to do, is get them into a structured school environment," she said.

Rose Avenue, whose 675 students are mostly new to Canada, also has a parent learning centre, after-school tutoring, a kitchen serving hot meals, and a visiting speech pathologist, psychologist and pediatrician, among other services.

The key to the children's success, though, doesn't seem to rest with one particular service, but with putting them in a situation – ideally a small group at first – where their stories can be heard and understood, said David Crichton, the school's principal.

"This is something that [one girl] has today," she said. "What are these called?"

The girl, also a refugee, was seven or eight years old but hadn't attended school before arriving at Rose Avenue. Ms. Soin had created word-search puzzles on paper, partly for the benefit of students who hadn't even had the chance to learn the alphabet in their mother tongues. Searching through letters helped them grasp the concept of the written word.

Ms. Soin smiled at Taki, who had pushed his chair away and stood over his work. Children coming from refugee camps often aren't used to sitting in a classroom all day, she said.

Salah partly understood why he was struggling when he saw his little brother sailing through school more calmly, and he realized that Taki had been too young to remember much of the war, Mr. Crichton said.

But recently Taki has also wanted to talk about it. He told Ms. Soin how his family "had to just run, and they had to crouch down, stay very quiet because there were bad people with guns," she said.

She said hiring translators should be a high priority because they allow teachers to talk to parents, who sometimes ask for their own tips on handling bureaucracy or parenting in Canada. Most important, it's often only with the parents' trust that children open up.

"When the parent says it's okay to tell your teacher … I think it really makes a difference," Ms. Soin said.

Salah and Taki's father, Mohamad Alaid, said the boys and their older brother hated their intermittent schooling in Jordan, where teachers sometimes hit them. In Toronto, he and his wife have become friendly with about 20 other parents and receive regular letters and calls from Rose Avenue. He came to like the teachers when he saw the "helpful" way they spoke to their students, he said.

"You're in the same family," he said. "In Toronto, all Canada … if you go to family doctor, it's different. If you go to school, you see … how teachers talk with children. It's very good, very good. I like this school." 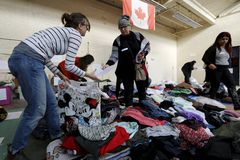