Toronto Mayor Rob Ford says allegations he used crack cocaine in a video are "ridiculous," but the leader of Canada's largest city is refusing to take questions on the matter, even as his council colleagues urge him to address it head on.

Mayor Ford spoke briefly with reporters as he left his home Friday morning, and again at City Hall a short time later. While he called the allegations ridiculous both times, he said little else. He also ignored questions on whether he uses crack cocaine, or whether he was suggesting the video had been altered.

"Like I said this morning, these allegations are ridiculous," he said at City Hall.

He also did not answer questions from reporters as he left an event for International Day Against Homophobia.

Mr. Ford came under scrutiny Thursday night, after online news site Gawker posted a story about viewing the video, which was offered up for sale. The Toronto Star later posted a similar story.

Deputy Mayor Doug Holyday, one of Mr. Ford's most loyal allies, was quick to rush to his defence Friday, telling reporters videos can be altered and the allegations are unsubstantiated. He also said drug dealers, who are accused of trying to sell the video, can't be trusted.

"I have not seen any indication of him using any substances like this, or anything else for that matter," he said at city hall.

Councillor John Parker said it would be wise for the Mayor to address the story head on.

"We all hope that the inferences that are floating around are untrue and the only one who can set us straight on that is the Mayor," he said.

Councillor Adam Vaughan said council has been working around the Mayor and his distractions since the day he was elected. He said the city needs a full-time mayor to move forward.

Toronto Police Service spokesman Mark Pugash said he was aware of the allegations and "we are monitoring the situation closely."

In a post at 8:28 p.m. Thursday night, Gawker editor John Cook detailed a trip to Toronto for a meeting with an anonymous tipster who claimed to have a video, recorded within the past six months, of Mr. Ford inhaling from a glass pipe. Mr. Cook said the tipster got in touch with Gawker by sending an e-mail to its tips line.

"Ford has a glass pipe in one hand; it's the kind that has a globe with two glass cylinders sticking out, one for inhaling, the other one that holds the drugs, and he's got a lighter in the other hand," Mr. Cook said. "Throughout the course of the video, which lasted from my recollection roughly 35 seconds, he's laughing at what this voice off camera is saying. And then he leans in and lights the pipe and inhales."

Mr. Cook has never seen Mr. Ford in person but said he was "100-per-cent sure" that it was the Mayor in the video, based on his own "visual assessment" and what he heard from the tipster and the person who owned the video.

Mr. Ford's lawyer, Dennis Morris, did not immediately respond to messages seeking comment, but he told Radio-Canada his client denies the allegations.

"I don't know whether or not such a video exists, but I think it would be fair for the public to see such a video and make their own conclusions," Mr. Morris said.

"I can tell you he denies the allegations."

This is not the first time Mr. Morris has acted for Mr. Ford.

In 2008, he represented the then-councillor when he was charged with assaulting his wife and uttering a death threat to her.

Those charges were later dropped because of inconsistencies in the wife's version of events, prosecutors said.

Two years later, during his mayoral campaign, Mr. Ford was dogged by revival of trouble he had in Florida back in 1999, when he was charged with driving under the influence and possession of marijuana.

He pleaded not guilty to the impaired driving offence (the marijuana charge was not pursued) – which Mr. Morris told reporters involved failing to provide a breath sample.

With reports from Justin Fauteux and Simon Houpt 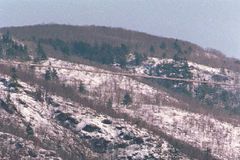 Follow Sunny Dhillon, Elizabeth Church and Ann Hui,  on Twitter @TheSunnyDhillon @lizchurchto @annhui
Report an error Editorial code of conduct
Due to technical reasons, we have temporarily removed commenting from our articles. We hope to have this fixed soon. Thank you for your patience. If you are looking to give feedback on our new site, please send it along to feedback@globeandmail.com. If you want to write a letter to the editor, please forward to letters@globeandmail.com.
Comments are closed