When city leaders built an enormous bridge over the Don Valley linking Bloor Street East to Danforth Avenue in the 1910s, they decided, after some debate, to include a deck underneath the roadway to carry subway trains, should Toronto ever get them. That saved great trouble and expense when the city finally got around to building the Bloor-Danforth subway line in the 1960s. The commuters who ride the subway today, enjoying the view as they sail underneath the Bloor Viaduct, can be thankful for their foresight.

This famous decision was exceptional in the truest sense. What makes it stand out is that, in Toronto, it is so unusual. Foresight, in this town, is the exception to the rule. Far more often, city leaders fail to think ahead. Sometimes, it seems we have learned nothing from the tale of the viaduct. Just look around. Left and right, you can find examples of staggering short-sightedness.

This year, Mayor John Tory caught the city's interest when he proposed to create a splendid new urban park by decking over the railway lands west of Union Station, in effect building the park on a huge roof over the tracks. Great idea, but it could cost something like a billion dollars. Imagine how much cheaper it would have been if, 20 or 30 years ago, before the waterfront construction boom, the city had set aside a swath of land for parkland built on actual terra firma. The rail-deck idea came along because no one had the sense to foresee how dense and crowded the area around Union would become, even though it was a natural target for development. Now that the area is chock full of office and condo towers, there just isn't any empty land left. The tens of thousands of people who are moving there to live and work have no place to walk the dog or read on a park bench.

Riding the new airport express train offers another glimpse of blinkered planning. Years ago, when authorities were expanding Toronto Pearson International Airport, they failed to put in a rail link, or even leave space for one. So when it came time to build the Union Pearson Express connecting the airport to downtown, they couldn't just lay track to the airport from a nearby rail line. They had to build a long, twisting overpass carried on tall pillars that dodges around roadways and hydro lines to reach the terminal. It's functioning now, and it works fine, but what a job it was, and what an expense.

The good old Yonge subway is another case in point. When it opened in 1954, travelling between Union Station and Eglinton Avenue, it seemed the height of modernity. Today, it feels cramped, its trains crammed at rush hour and its stations and platforms a crush of people. The entrances and stairways are too small. The platforms are too small. Try standing, with your back to the wall and a train rushing in, at the poorly designed Yonge stop on the Bloor-Danforth line, a busy transfer point.

If they were thinking ahead to what the city could become, planners would have built platforms twice as big. They would have built broader stairways and escalators. They would have allowed for elevators, too. For that matter, they would have put in a second, parallel track to make room for more trains at busy times. To retrofit now would be either practically impossible or ruinously expensive. Thanks to the lack of foresight, we're stuck.

In fact, it is in the field of public transit that the city's failure to think ahead has cost Toronto the most. These days, governments are, at last, showing they understand the need to plan for the future. Billions of dollars worth of projects are under way or on the drawing board, acknowledging Toronto's graduation from big city to metropolis. But all this building is only necessary because they dithered for decades, putting Toronto years behind other major world cities.

Failing to think ahead is a failure of imagination. Go up to the attic of Old City Hall and you can see a breathtaking example.

The grand pile at Queen and Bay Streets is used mostly for courthouses now, but the courts are moving to new quarters in a few years, so architects are sizing it up for possible new roles, such as housing a museum of Toronto history. They would love to make use of the cavernous spaces under the roof, which would make glorious venues for events of all kinds.

The only problem that is that, in their wisdom, officials have installed a new air-conditioning system up there. It uses deep-lake cooling, exploiting cold water from the depths of Lake Ontario. That meant putting a network of big pipes in the attic, thoroughly destroying the potential of some of its grandest spaces. Did no one – no one at all – say, hey, wait, this could be one of the greatest rooms in the whole city one day? Now, it never will be.

That kind of short-sightedness is simply unforgivable. 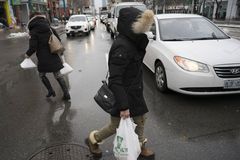 Toronto’s highway toll proposal is a war on the car – and it’s about time
December 9, 2016
Toronto voters will pass judgment on road tolls, Mayor Tory says
December 6, 2016
Follow Marcus Gee on Twitter @marcusbgee
Report an error Editorial code of conduct
Due to technical reasons, we have temporarily removed commenting from our articles. We hope to have this fixed soon. Thank you for your patience. If you are looking to give feedback on our new site, please send it along to feedback@globeandmail.com. If you want to write a letter to the editor, please forward to letters@globeandmail.com.
Comments