SlutWalk, the in-your-face response to violence against women that began with a march in Toronto, has gone viral, inspiring plans for similar protests in more than 60 cities around the world and setting off a debate among feminists about using loaded language even if it brings huge attention to their cause.

In the coming weeks, crowds are expected to take to the streets in Amsterdam, London and Sydney, Australia, in Santa Cruz, Cal., and Austin, Tex., all under the SlutWalk banner. The growing tide of protest is the latest example of how social media can be used to mobilize people. But the attention the walks are raising is fuelled in no small part by the provocative title, coined by a Toronto art director who makes no apologies for her controversial turn-of-phrase.

"If you are going to be heard, you have to rise above the noise," explained Sonya Barnett, who co-founded the protest movement earlier this year. She's skeptical that a protest by any other name would be making headlines in the British press and on Fox News or eliciting messages from would-be march organizers halfway around the world. "Without such an audacious attitude, we wouldn't be where we are."

Ms. Barnett came up with the name for last month's Toronto march after talking with friend and University of Guelph student Heather Jarvis. Both were outraged by a report in a campus paper that a police officer advised York University law students to "not dress like a slut" to reduce the chances of assault.

"He used the word 'slut' in his way. We wanted to take the word and sling it right back in our way," said the 38-year-old mother, who until this spring had never marched in a protest. Besides grabbing attention, the title also is designed to teach people about the harmful use of language, she said.

The Toronto group has faced criticism - most notably in the opinion pages of the British newspaper The Guardian - for using a misogynist putdown that some argue feminists can never reclaim. In a piece published earlier this week, two academics based in the United States wrote that the SlutWalk organizers' efforts to change the meaning of the word were "a waste of precious feminist resources."

Others who support the group's bravado say any movement that challenges widespread attitudes that blame women for sexual attacks should be applauded.

Kathryn McPherson, a professor who specializes in women's history at Toronto's York University, said the debate among feminists is not new. "The question of where sexuality fits in is an intense one," she said. Such a charged word should not be taken lightly, but in some ways, using it has allowed organizers to put the issue of women's sexuality on the table and then focus on a more pressing topic - why society has failed to address sexual violence, she added.

As a strategy, it is clearly working, she said. "It's clever. It's effective. It has people's attention."

Ronda Bessner, an assistant dean at York University's Osgoode Hall Law School, who organized the January meeting at which the Toronto officer made his remarks, declined to weigh in on marchers' choice of words. Her main concern, she said, is that students feel comfortable reporting a sexual assault and that police have the proper training. The officer's remarks, to a small group of students and staff that included Ms. Bessner, upset several in the room who were there to discuss safety, she said. Responding to calls and letters from Ms. Bessner, the officer has since sent a written apology.

"I was shocked. I did not think that in 2011 police officers would be saying things like this," she recalled.

A frustration with similar attitudes - and the boldness of the Toronto group's tactics - is what attracted Karen Pickering, one of the organizers of a SlutWalk planned for later this month in Melbourne, Australia.

A long-time organizer of women's events that failed to get media attention, Ms. Pickering said the march has already been covered by both the city's major dailies two days after details were released.

"We have eight radio interviews for this week," she said. "I'm kind of like, bring it on. Clearly there are people who are fed up with playing nice and engaging people in subtle debate." 'SlutWalk': Is the loaded protest title effective or offensive?
May 11, 2011 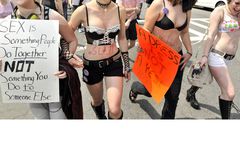