Late one December night in 1887, police were making their way through the streets of Toronto, cracking down on "palaces of sin" in the city's red-light district. They were headed for Madam Alice (Allie) Miller's house, one of the best-known upscale brothels in town.

Barging into No. 2 Sheppard St., officers expected to find a houseful of illicit sex and boozing, but were shocked by what they didn't find. There were hardly any men in there at all, not a drop of liquor and no Ms. Miller. She must have been tipped off.

Toronto used to be a very different place.

Professor Laurie Bertram, along with 12 students and a team of library staff members, spent several weeks examining archives and digital databases from 1865 to 1915 to reveal the well-hidden history of sex work in Toronto. It was all part of Ms. Bertram's fourth-year history seminar at the University of Toronto, called The Oldest Profession in Canada.

By sifting through old court and newspaper reports and comparing them with archival maps, city directories, diaries and memoirs, the researchers were able to create an interactive map that pinpoints places in Toronto formerly associated with the sex trade, from courthouses to brothels, including Ms. Miller's house.

"The city itself became our classroom and our archive," Prof. Bertram said of the exhibit on display at U of T's Robarts Library.

Although the sex trade was hidden, the professor considers it to be a large part of 19th-century Toronto. In fact, the city was once the burlesque capital of Canada, which U of T undergraduate student Josselyn Seguin said started to boom after the Second World War.

"No matter what side of the prostitution legislation debate someone is on, it's important to remember that sex work had a very big role in Canadian history and in the history of the city," Prof. Bertram said.

Economically, she said, brothels were an essential business in Western Canada in the effort to establish new settlers. If you didn't have a brothel, you would have a hard time attracting new residents, making madams – the women who ran brothels – some of the earliest businesswomen in those places.

"I don't think that people often think of sex workers as town founders or community leaders," she said. "The sex working population in the 19th century was very large, diverse and complex … but it's clear that these women made a huge imprint on the city."

Undergraduate student Satoko Nakamoto focused her research on police officer David Archibald, an anti-prostitution advocate known as the "Guardian of Morals" for his efforts at snuffing out illicit behaviour in Toronto. Mr. Archibald never intended to be a policeman for more than a few weeks when he emigrated from Ireland in 1865 – he joined only to pass the time until the weather improved for farming. That all changed when he witnessed Toronto's "houses of ill fame," and he decided to stay on the force to combat them for more than 50 years.

"It was very interesting, especially looking through old newspapers," Ms. Nakamoto said, citing the Globe and Mail archives. "It was kind of like travelling through time."

Katherine Crooks, a first-year PhD student who also contributed to the exhibit, said the interactive map not only illustrates that sex workers are very much a part of the community, it also expresses the diversity of labour in Toronto.

"By showing that sex workers occupy physical space in our city, it makes an explicit claim to their space in a contemporary and historical context," she said.

Co-creator Megan Ross, a doctoral student in the faculty of law who is studying the legislative history of sex work, said the exhibit is also about "policing, surveillance and the regulation of sexuality," and how prostitution laws get used to police other non-normative sexualities.

"The sex industry played a really foundational role in the building of our cities and our country, and that history hasn't been acknowledged or respected," she said. "One way to start respecting it is to acknowledge that it happened."

The exhibit is on display at the Robarts Library until June 1. 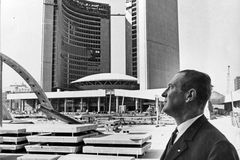 Toronto may finally be getting a history museum, thanks to this couple
April 3, 2015 Toronto needs to do a better job of preserving its heritage
February 26, 2015