Toronto has its own version of the two solitudes, and it revolves around streetcars.

Depending on whom you ask, the transit vehicles can be "sexy" or "ugly." To some they're "obsolete technology," others call them "forward-thinking." They're a "tourism gimmick" or a "remarkably efficient way of moving people."

But no matter if you love them or hate them, streetcars are here to stay. Toronto retained its network when other North American cities were tearing them out and relies on them to carry huge numbers of transit passengers every day. The city is on the verge of rolling out its next generation of the vehicles, a $1.2-billion vote of confidence in streetcars.

The promise is that the 30-metre Bombardier vehicles will be more spacious, quieter, faster and more comfortable.

"Some time from now kids will only know this streetcar as the streetcar of Toronto and I think we're very proud of this," said Claire Patrigeon, manager of light rail vehicle engineering at the Toronto Transit Commission.

"A city without streetcars is not as friendly," she added. "I personally think that transit is the future of the city."

That future – the Fordian nightmare – comes as numerous other cities that once shunned streetcars are moving ahead with new projects. And it cements Toronto as the North American exemplar of a streetcar city.

"When done well it can efficiently move a lot of people for costs that are far less than a subway," argues Brandon G. Donnelly, who blogs at Architect This City.

In 1966, Metro Toronto chairman William Allen called streetcars "as obsolete as the horse and buggy." Critics of this type of transit have seen little since to change that view.

A vehement opponent is Mayor Rob Ford. He once slammed them in a radio promo, saying they make traffic worse. Earlier this year, he said "I know one thing: I won't get on a streetcar."

Mr. Ford is not alone. Some drivers argue that streetcars block traffic. Other people call them loud and slow. But does the antipathy go beyond that? One possibility is that the permanence of a streetcar line annoys opponents – by its nature, a route cannot be easily adjusted or killed. Although that permanence can attract developers and encourage transit supporters, critics argue that buses are a better option. Streetcars that share lanes with cars, as most of Toronto's do, can be stalled by car accidents or other delays.

Bus routes can be adjusted to fit changing demand and the vehicles can fit more flexibly into the traffic mix. A single turning car or broken-down streetcar need not delay a long line of other vehicles. But to the TTC, switching to buses would raise other issues.

Chris Upfold, deputy CEO of the transit agency, points out that it would take roughly three times as many buses to carry the passengers who ride streetcars. These would have their own traffic-clogging effect and their stops would reduce the amount of space available for parking. It would also triple the operator cost, a major part of transit budgets.

"People that are in their private cars aren't making the comparison between what would this be like if it was buses instead of streetcars," he argued. "People are comparing what the ideal would be if there was no transit. And they are comparing that, if we just took the streetcars away things would be way easier, they aren't thinking of what you would have to add back in."

Transit advocate Steve Munro, who was part of the group that helped save Toronto's streetcars in the early 1970s, said that people can be justifiably annoyed at years of streetcar-related construction, much of which he attributed to short-sighted decisions in the past. But he also said that critics can be unreasonable, looking at buses on wide suburban roads and assuming they would work the same way in the narrow streets downtown.

And Mr. Upfold said that the very downtown character would be impacted if the streetcars were replaced, noting that buses on Queen could be arriving as often as every 45 seconds.

"Queen partly is the way Queen is because historically the tracks were there. That's what led to that particular style of development, you know those three– and four-storey buildings that you see on Queen, that higher density," he said. "You would have all of that feel – that ephemeral, I don't know, café culture, whatever it happens to be, pedestrians, people walking along – you would have that affected by a 40-foot diesel bus roaring beside them. And the streets around the world that have that kind of [bus] service do not have the kind of businesses and restaurants that King and Queen and College have."

Starting Sunday, the first two new streetcars will begin service on Spadina. This is the big unveiling, after more than a year in which citizens could see them only as they rolled past on testing and training runs. Ms. Patrigeon, the streetcar manager who has spent untold hours on them, revealed an emotional response when she spots one on the streets.

"I'm very proud to see it out there without me," she said. "It's like, I think, kids walking for the first time without their parents."

The two modern streetcars will initially operate among the aging vehicles on the Spadina route but new will gradually replace the old ones. The new vehicles are expected to be on all routes within five years.

The promise is that they will be quieter, faster and, a blessing for a few months each year, feature air-conditioning. They are low-floor and there is a ramp that can be deployed for people in wheelchairs. People will be able to board at all four doors, which should reduce the amount of time at stops and perhaps also spread the passengers more evenly throughout the vehicle. They are much bigger and, even though there won't be as many vehicles, the TTC says people will notice the extra space.

Other obvious differences are the area for bicycles and the faster acceleration. Lionel Jordan, one of the lead trainers on the new streetcar, said that they don't have the "sluggishness" of the current fleet. They did hit 70 kilometres in testing, but that was on a closed road and regular passengers are unlikely to experience that.

Mr. Jordan has spent close to 1,000 hours driving them. He's probably been photographed at the controls at least as many times.

A curious aspect of the streetcar's long testing and training period is that it allowed a fan base to grow. The TTC encouraged this and Mr. Upfold tried to ramp up the excitement with a slightly theatrical presentation at the last board meeting in which he called them "crimson beauties."

The enthusiasm can be understood in the context of Toronto's glacial pace toward new transit. The arrival of the streetcars represents one of the few bright spots, alongside the Eglinton Crosstown and recent hints of progress toward an LRT on the waterfront.

And the hyperbole is not without a receptive audience. People eagerly watched for the new streetcar and tracked its movement on social media. One of the new vehicles passing a patio this summer provoked a round of applause. And a recent excursion on a streetcar prompted a number of passersby to grab their camera-phones and one man to call out "nice ride."

"People enjoy it. At every traffic light we have people coming in front of the car, taking pictures and video," Ms. Patrigeon said. "I hope that Toronto will identified by these new streetcars." 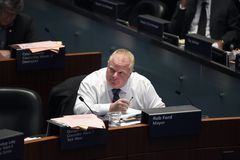 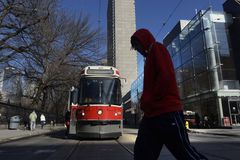 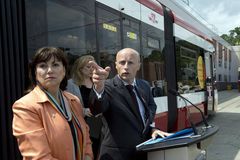 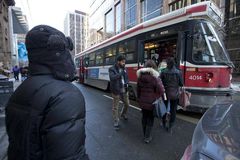 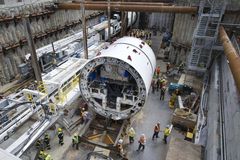