As SmartTrack changes shape behind the scenes, there were calls for Toronto Mayor John Tory to accept the advice of experts studying his transit plan, but also concerns about how the city seems to be moving toward paying for something the province had promised to fund.

Mr. Tory ran on a promise to add service and many new stations to local GO Transit rail lines, as well as lay new track in the city's west end. He promised the result would be 53 kilometres of heavy rail, serving 22 stations, and that it would be operational in seven years.

The concept formed the hook for his successful election campaign, though its feasibility was fiercely questioned throughout the race. The plan has been under review for months by officials with the city and the regional transit agency Metrolinx. Their reports are expected in February and March, but a smaller and cheaper version of the plan is already emerging.

The Globe and Mail reported exclusively Friday that the review of the plan is leaning toward substantial changes. These include having fewer new stations along the GO lines, switching to light rail along Eglinton Avenue in the west end and a phased approach to construction that will leave the northeastern section until later. Softening the blow to supporters of the original idea, the new vision also includes a much smaller price tag and lower construction costs.

Mr. Tory was not speaking publicly Friday about changes to his proposal. But others at city hall were praising the plan's evolution and saying this would make it easier to garner political support.

"These changes, I think, will help make it pass through council," said councillor Joe Mihevc, who also sits on the board of the Toronto Transit Commission. "The people who follow transit very closely and know the transit files in Toronto very closely, they're starting to say, 'Okay, we have made good progress here,' and there is, frankly, rejoicing."

Councillor Gord Perks, who is often at odds with Mr. Tory, said that accepting advice about changes needed to SmartTrack was a chance for the Mayor to set a different example than former mayor Rob Ford, who has said he wants to run again in 2018.

"I'm hoping that the mayor comes out and says, 'You know what, reason should prevail,'" Mr. Perks said.

"Mayor John Tory has an interesting opportunity to surpass his predecessor here. His predecessor refused to face facts, and as a result we got nothing done. If Mayor Tory can be bigger than that and say, 'You know what, my original proposal doesn't work, but I want something to happen, so I'm going to back an Eglinton LRT and some investments in regional express rail,' then he'll have proved himself the better man."

But Councillor Josh Matlow, while praising the mayor for moving the transit debate beyond subways-or-nothing rhetoric, noted that building LRT on that stretch of Eglinton had been part of the province's larger plan. Comparing the situation to the Scarborough subway extension, he wondered at the city's willingness to assume responsibility for projects others already said they would pay for.

"Because of the promises made during the municipal election, we've taken what was a new transit project that was going to be totally funded by the province, and it's going to be a joint venture between the three levels of government," he said.

Supporters of the original plan, meanwhile, argue that it remains fundamentally sound, while acknowledging that elements may need to change. Echoing a stand Mr. Tory has been voicing in recent months, the head of a group advocating for the plan said that some of the specifics were less important than the broader concept.

"I don't think that the heavy rail portion in the west end is the most critical piece," said Tom Allison, managing director of the group Friends and Allies of SmartTrack.

"For me, the critically important thing is it must connect Markham city centre to downtown Toronto and back out to the airport corporate centre. That's the most key component of this. That has to happen. Those three must be linked up."

Let’s see how well Toronto handles another transit disappointment
May 16, 2018 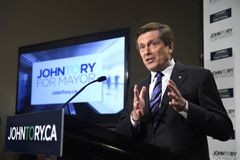