Roam around the suburbs ringing Toronto and one thing you notice is how much governments are investing in new transit: new buses, new bus corridors, new stations. While Toronto talks endlessly about how to build better transit, the 'burbs are getting it done.That is surprising, because for decades the suburbs were considered a transit desert, so spread out, so thinly populated and so hooked on the private automobile that trying to create a workable transit network was futile. But times are changing in the lands of malls and freeways.

Road congestion is making many commuters look for alternatives. Young people, in particular, are less into car ownership and more willing to try another way. Governments are encouraging denser, more intense, more transit-friendly development as a counter to decades of sprawl.

Better transit is a key to making the suburbs more modern, and they know it. They are in the midst of an ambitious, in many ways unlikely, transit build-out that is beginning to show results. Brampton's Züm bus rapid transit service runs smart-looking hybrid diesel-electric vehicles on four routes. York Region's Viva service is getting $1.4-billion worth of bus-only rapidways on Highway 7, Yonge Street and other routes so transit riders don't have to suffer through car traffic.

To get an up-close look at the suburban transit boom, I took a ride last week on the new Mississauga Transitway, a buses-only route that traverses Hazel McCallion country. My guide was Geoff Marinoff, Mississauga's transit director.

In his seven years on the job, traffic on Mississauga's transit system, known as MiWay, has grown to 36 million paid rides a year from 29 million, giving Mississauga the third biggest transit system in Ontario, after those of Toronto and Ottawa, and the 10th biggest in Canada. Mississauga has added 80 buses over the same period, bringing its fleet to 463.

That is all the more encouraging given that, with most of the space for new housing now taken up after decades turning farm fields into subdivisions, Mississauga's population is growing only slowly. "We are capturing market share, which is what we wanted," says Mr. Marinoff.

The Transitway is his biggest bet so far on the future of suburban transit. This is more than a buses-only lane on a street. It is a new, separated route for buses, the first in Greater Toronto. It ducks under other roads to avoid intersections. It has stations, much like a subway or light-rail line without the tracks.

The first stretch opened Nov. 17. Buses whisk unimpeded along the freshly paved roadway, avoiding 10 traffic lights as they make their way from Mississauga City Centre Transit Terminal to Dixie Road on a route paralleling Highway 403 and Eastgate Parkway. The four beautifully designed, fully accessible new stations have heated floors, bicycle parking, vending machines and digital screens to tell riders when the next bus is due.

When the $498-million project is completed in 2017, with funding help from the provincial and federal governments, it will have 12 stations. Riders will be able to travel 18 kilometres from Winston Churchill Boulevard in the west to Renforth Drive in the east, connecting from there by highway to Pearson airport and the Bloor-Danforth subway. GO Transit will run buses on the route, too.

The new line proved its usefulness right off the bat. When traffic turned into an ordeal during the season's first snowstorm, buses sailed along the Transitway. "It did what it what supposed to do," Mr. Marinoff says.

Will it prove attractive enough to lure commuters out of their cars? Mr. Marinoff is realistic. Eighty-four per cent of trips in Mississauga are by automobile. "The car is not going away," he says, "but does it have to be for every trip?"

With better transit, families might be able to do away with that second (or third or fourth) car. Those that keep driving should face a bit less traffic. "If I can get 50 people on a bus, I just got rid of 40-odd cars off the road. That's a lot of road space. As we intensify, there is going to be no place for new roads. We need to free up that space."

He takes heart from the fact that 38 per cent of MiWay riders are students. Many are delaying getting driver's licences and buying cars. The hope is that their transit-riding habit will stick.

The Transitway is designed on that hope. The roomy stations are pretty deserted now. Most commuters are just passing through on two express-bus routes. But connections with north-south bus routes should bring more people. The stations have parking lots or pick-up and drop-off areas so commuters can arrive by car, too.

When the Transitway is finished, Mississauga has another big project on its wish list: a $1.6-billion light rail line (so far unfunded) along Hurontario Street from Brampton to Port Credit. With that north-south route crossing the east-west transitway, Mississauga could boast a real, honest-to-God rapid-transit system.

And to think it is happening in the suburbs.

How a surge of seniors in Canada’s suburbs poses new transport challenges
May 12, 2018 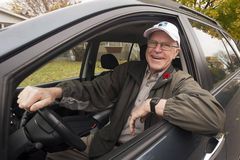 Toronto must improve transit to keep growing as financial services hub: report
May 12, 2018