Add subway woes to the driving difficulties in Toronto's busy Yonge and Eglinton area, as the firm building the Crosstown light-rail line across midtown plans to close the station for 24 weekends this year.

The first of the Eglinton station shutdowns is scheduled for the weekend of Feb. 10-11, followed by the subsequent three weekends. The closings will inconvenience the many people who rely on the station – which is the seventh-most heavily used station in the Toronto subway system – although crews are taking measures to minimize the hassle.

Work will be done around the clock to keep down the number of times the station must shut. The Toronto Transit Commission will use the weekends to do its own maintenance and repair work as well. Buses will shuttle people from the area to nearby stations. And riders will be encouraged to make more use of the University line, to the west, with the TTC putting extra buses on Lawrence Avenue to move passengers in that direction.

None of this is likely to eliminate the aggravation felt by people using the area, who have been dealing already with multiple road restrictions while construction occurs behind barriers – restrictions expected to last another 14 months. A lively intersection merging retailers, condominium developments and apartment buildings, Yonge-Eglinton is now a mess of large construction sites and barricades, slowing traffic and leaving pedestrians who are unfamiliar with the area struggling to figure out how to access the subway station.

In spite of these difficulties, the people in charge of doing the work point out that it is being intricately planned to allow the dense urban area to keep functioning, even though it would be more expedient simply to shut down the Yonge-Eglinton intersection entirely.

"There's been a strong commitment to minimizing the impact on the public," said Chris McCarthy, design director for Crosslinx Transit Solutions, the consortium hired by the provincial government to build the Crosstown light-rail line.

The new Eglinton station is part of the 19-kilometre light-rail line being built between Mount Dennis in Toronto's west end and Kennedy station in the city's east end. The Crosstown is the first of four light-rail projects promised by former premier Dalton McGuinty in 2009. The line is scheduled to open in 2021 as a shorter version of what was promised, with Eglinton serving as a key interchange between the LRT and the subway.

The primary purpose behind this year's 24 station closings is not the LRT itself. Crosslinx has contracted with the TTC to upgrade machinery that would be used in the event of a fire in the subway station. The work will be to the south of the Eglinton station, where subway trains now emerge from the tunnel into open air. A cap will be added to extend the tunnel and a better ventilation system built on top of that.

During these shutdowns, though, the opportunity will be taken to do demolition work and building within the station itself, said Stanley Hole, the Crosslinx project manager for Eglinton station. The TTC said it would be doing "a number of different track, tunnel and platform projects" on these weekends.

Although construction on the new station is in its early days, the overhead view of the Yonge and Eglinton intersection offers a sense of the scale of the project. There are multiple large construction sites in the area, forcing motorists to slalom from one side of the road to the other.

These sites will shift around with the flow of construction, but it will be 14 months before work moves primarily underground, with a temporary roadway installed as a cap. And it will be some time after that before construction here is finally completed.

Once complete, the capacity of Eglinton station is expected to be dramatically expanded. Along with the new LRT platforms, there will be another concourse and the subway platform will be lengthened.

Making the platform longer extends it to the north and has the effect of placing it under the intersection. The result is that people entering from the northeast and northwest corners will be able to access the station directly, instead of through a lengthy pedestrian tunnel. The LRT will run beneath the subway, on rails laid about 22 metres below ground.

"It's probably one of the most complicated jobs ever to happen in Toronto," Mr. Hole said. 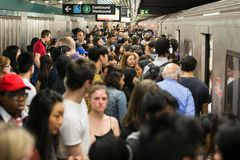 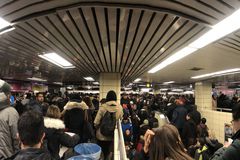 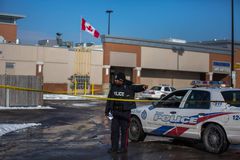 Follow Oliver Moore on Twitter @moore_oliver
Report an error
Due to technical reasons, we have temporarily removed commenting from our articles. We hope to have this fixed soon. Thank you for your patience. If you are looking to give feedback on our new site, please send it along to feedback@globeandmail.com. If you want to write a letter to the editor, please forward to letters@globeandmail.com.
Comments are closed