Thud, thud, thud. Its sound piped through headphones, Harvey's heart was beating fast, as it often does, and Harvey was not the only dummy in distress.

In an adjoining operating room, the lung of a traffic accident victim appeared to have collapsed, while in a third studio a newborn baby lying alongside its mother was turning blue as it struggled to breathe.

No need to fret: Harvey and friends are anatomically correct mannequins.

Long renowned for its expertise in trauma, St. Michael's Hospital in downtown Toronto has some formidable new technology to bring into play: The $4-million Allan Waters Family Simulation Centre, unveiled on Friday and billed as the most sophisticated such enterprise in the country.

Encompassing a full-size operating room and a state-of the-art skills lab where trainees can learn and hone an ever-widening range of diagnostic techniques, the 5,800-square-foot centre is housed in the Li Ka Shing International Healthcare Education Centre, which adjoins St. Mike's.

And the core of it all are the mannequins, hooked into a network of high-tech information conduits developed by California-based Cisco Systems Inc.

"Here you can simulate almost anything, and that's the beauty of it," said Dr. Teodor Grantcharov, the centre's medical director.

Take Harvey, for instance, the perennial cardiac patient who can simulate every heart ailment from hypertension to aortic valve sclerosis, and acute pericarditis.

"Simulation fills a great void," said respiratory therapist Dr. Roger Chow as he put Harvey through his paces. He dials in the code for cardiomyopathy, or disease of the heart muscle, and an ominous whooshing sound is heard.

"We've learned from the airline industry, from methods of training that were medicine-adapted, and realized that a lot of the errors being made were human errors. And we're still learning."

In the operating room, meanwhile, a trauma team comprising an anesthesiologist, a general surgeon and a respiratory therapist is struggling to save a car-crash patient. A tool named a glidescope allows all three to monitor the situation simultaneously as a needle is inserted in the chest, allowing a failing lung – a common cause of heart failure – to re-expand.

And in the neonatal unit, a different resuscitation procedure is under way. The newborn is breathing badly, its heart failing fast.

It needs some medication quickly, but inserting an IV in an infant is a tricky business, so Dr. Doug Campbell attaches a tube to its navel. Epinephrine (adrenalin) flows through and within seconds the baby begins to revive, a healthy wail filling the air as its vital signs, displayed on an overhead screen, start to improve.

"We have shown that surgeons and health care specialists who develop their skills in simulation centres are better at their trades and make fewer mistakes in the operating room," said Dr. Grantcharov, deftly manoeuvring levers on a machine that determines the best places to make incisions in assorted surgical procedures, and the best instruments to use, all part of an effort to minimize the impact of surgery.

St. Michael's opened its first simulation centre 15 years ago, but this new one takes things to a whole new level, said Dr. Patricia Houston, the hospital's vice-president for education. Above all, the idea is to make the mock scenarios as realistic as possible, via role playing and a range of imaginative special effects, such as the odour of vomit, and excrement.

"I see this as a turning point," Dr. Houston said. "We are moving forward to becoming a world-class centre for surgical simulation."

Editor's note: The print version and earlier online version of this story contained an unclear description of the glidescope tool. 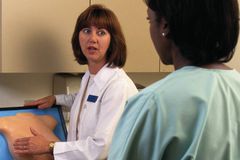 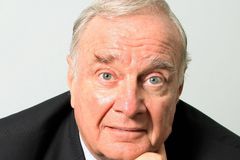 ROB Magazine
Can an app save billions in health-care costs?
October 28, 2011 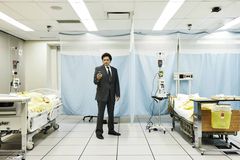