After her brother died last month and her mother was not producing milk, Toronto Zoo staff took Juno away to raise her on their own – a tricky, life-and-death business that keeps a team of 20 keepers, veterinarians and technicians busy, day and night. As they work, they are learning lessons about the care and feeding of young bears that could one day help save one of nature’s most magnificent animals from decline or extinction. Marcus Gee reports from the zoo 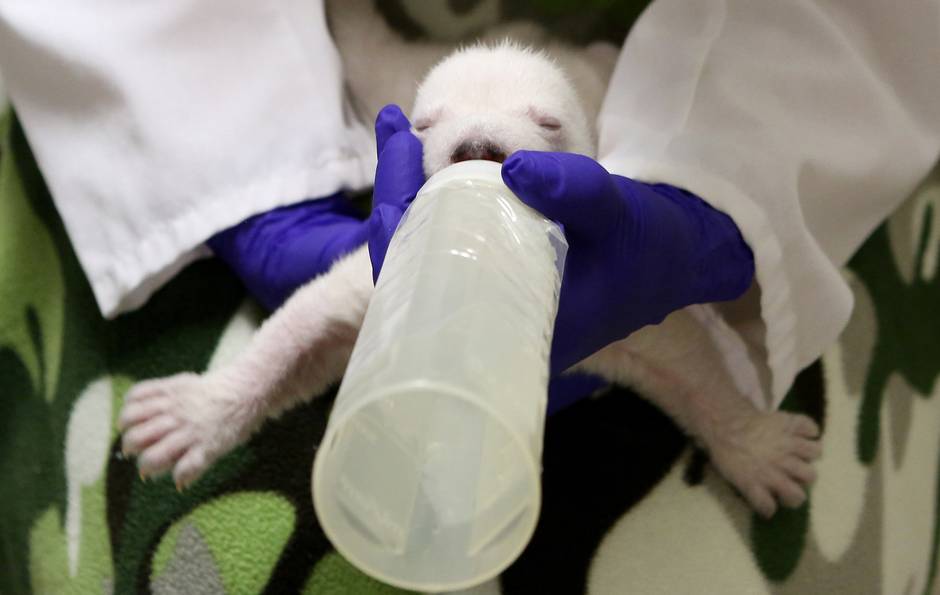 In the predawn hours of Nov. 18, the veterinary team looking after a week-old polar bear at the Toronto Zoo noticed a change in the cub’s behaviour. Normally squirmy, vocal and hungry, she was quiet and lethargic. Caregivers had to rouse her to feed. She was slow to suckle on the bottle that holds her special formula. Her caregivers knew this was trouble. The polar bear is the largest carnivore treading the surface of the Earth, a clawed behemoth that can weigh more than 700 kilograms and pluck an adult seal from the sea or ice with paws the size of frying pans.

But the blind, toothless, helpless newborn, only about the size of a squirrel when it takes its first breaths, is entirely dependent on its mother. And this cub, nicknamed Juno, was without a mother’s care.

The bear who gave birth to her at the zoo on Nov. 11, Aurora, was not producing the rich milk that gets the fragile cubs through their vulnerable early weeks. A brother born at the same time as Juno died within 24 hours. The same thing has happened to other cubs from the previous four litters produced by Aurora, a 340-kilogram bear who came to the zoo in 2001 with her sister Nikita after the two were orphaned in the wild. So zoo staff took Juno away to raise her on their own, a tricky, life-and-death business that keeps a team of 20 keepers, veterinarians and technicians busy, day and night. As they work, they are learning lessons about the care and feeding of young bears that could one day help save one of nature’s most magnificent animals from decline or extinction.

The zoo has managed it twice before, “hand-raising” Aurora’s earlier cubs Hudson, born in 2011, and Humphrey, born in 2013. But keepers are always on guard for an emergency. Outwardly healthy cubs can quickly worsen and be dead within hours. “Suddenly they can crash. It really is quite dramatic,” says Christopher Dutton, the zoo’s head of veterinary services. “That’s why we’re always on our toes. It’s hard to relax.”

Any number of things can go wrong. The special formula fed to cubs can mimic but never match its mother’s milk, so hand-raised cubs are more prone to diarrhea, constipation or milk clots in the stomach. Anyone of these can be fatal to a fragile newborn. Keeping the temperature and humidity right for the bears is hard. The cubs must be warm, but not too warm. In the wild, they nuzzle their mothers in snow-covered dens. Infection is a constant threat. Juno never got Aurora’s first milk, or colostrum, the life-giving fluid with antibodies that strengthen the immunity of young cubs. Without that safeguard, cubs can go into shock from infection.

This is what Juno may have faced on Nov. 18. Caregivers who tried to give the cub her 6 a.m. bottle noticed a dramatic difference in the usually active bear. Her team jumped into action. They called in veterinarian Pauline Delnatte, who warmed the cub and gave her oxygen. Dr. Dutton arrived at around 8 and inserted an intravenous catheter into Juno’s arm, feeding her IV fluids, dextrose and antibiotics. She perked up by midday and started feeding again. Within a couple of days she was back to normal. 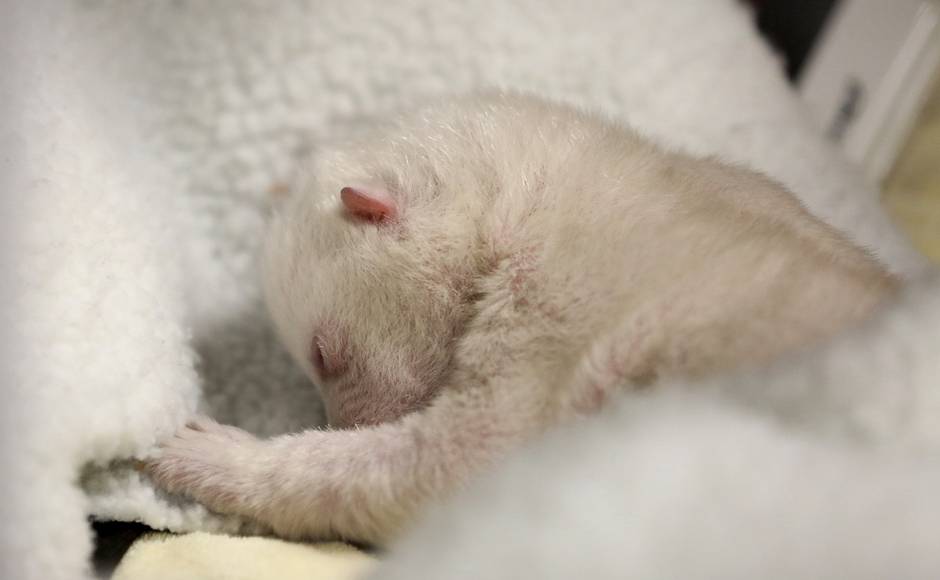 Juno’s close call showed what a chancy thing it is for humans to raise an infant polar bear. Visit with Juno and her support team and you can see what care, effort and attention to detail goes into keeping this wriggling ball of need alive.

Juno lives in an isolation room in a nondescript zoo outbuilding far from the snack bars and moated enclosures that the public sees. She spends most of her time in a clear-walled incubator, with a stuffed-elephant toy and a couple of fleece blankets for comfort. Staff take her out every two or three hours to feed her from a bottle. They also massage her belly and backside to make sure that she urinates and defecates regularly, a process that looks a bit like squeezing the toothpaste from a tube.

As the wriggling bear cries for her bottle, emitting something between a growl and a squawk, veterinary technician Cassia Devison hushes her with a motherly, “Yes, yes, here I am. You are so hungry,” before proffering a bottle to the eager cub.

As Juno urinates into a paper towel, she congratulates her. “That’s a big pee, lady.” After she pats Juno’s rear, the cub produces a trickle of excreta that looks like cookie crumbs, some of which falls into the pocket of Ms. Devison’s lab coat.

The one thing Juno’s caretakers won’t let her do is suck on their skin as the nursing instinct takes hold and she tries to latch onto anything vaguely promising, even if it’s human. That would be a bit too familiar. One day soon the bear will leave their nurturing company. 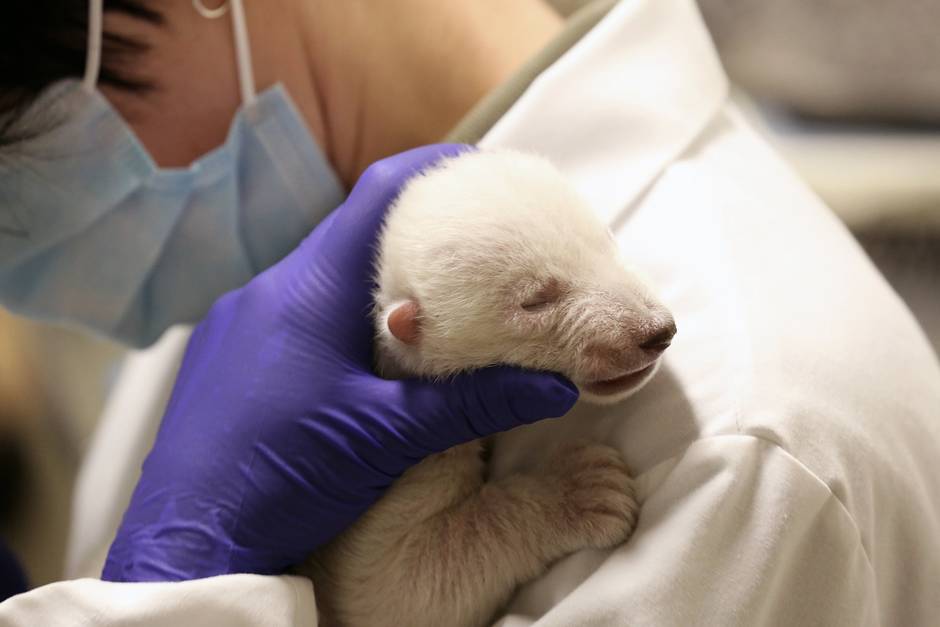 Now more than three weeks old, Juno seems to be thriving. After losing weight in the early days, common for newborns, she had grown to 1,169 grams as of Friday, up from her birth weight of 750 grams. Like any baby, she howls when she is hungry, a sound loud enough to be heard through the building. When she drinks from the bottle, she waves her limbs in apparent pleasure – a reaction keepers call her “happy legs.”

But the zoo is taking no chances. Staff are near 24 hours a day. They wear surgical masks and gloves whenever they’re around her. They take her temperature with a rectal probe. They X-ray her, or try to – she’s awfully squirmy and won’t stay still. They take blood samples to check her glucose and electrolyte levels. To build up her resistance to infection, they inject her with blood serum taken from her mother or another bear. They scan her innards with an ultrasound machine, first spreading lubricant on her furry belly so the handheld scanner glides across it. She complains loudly about that.

Getting her nutrition right is perhaps the biggest challenge. Mother polar bears produce a milk that is heavy in fat from their diet of seal meat. Her powdered formula, Milk-Matrix 30/52, is a special blend for marine mammals. Zoo staff add lactase to help prevent milk clots and wild-salmon oil against constipation. When the fish oil doesn’t work, says Dr. Dutton, staff give her “the odd enema.”

If it seems like a lot of effort for such a tiny beast, all this work serves a serious purpose. Experts estimate the world has only 20,000 to 25,000 polar bears, about 15,000 of them in Canada. Environmental groups say that global warming could devastate that population by shrinking the ice sheets that bears roam for seals. If so, it will be important to know how to raise polar bears in captivity. “We don’t know what the future holds for polar bears in the wild,” says Maria Franke, the zoo’s curator of mammals. 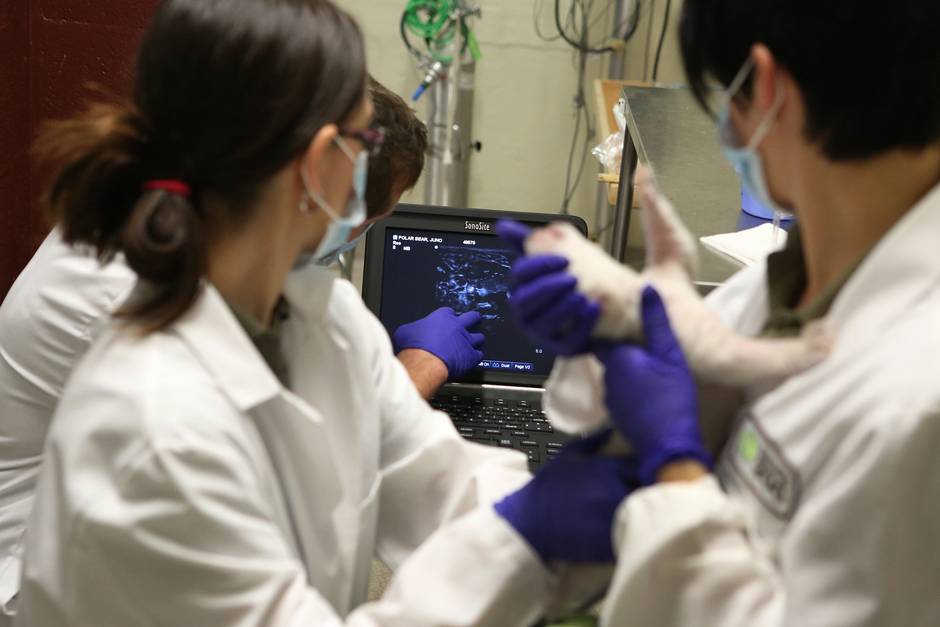 Juno offers the Toronto Zoo a chance to show off its conservation skills at a time when zoos are fending off criticism from animal-rights groups. To bolster its research and improve animal care, the zoo is building a state-of-the-art, $18-million Wildlife Health Centre, complete with a “strong room” for large animals, a special reproductive unit, a pool for aquatic species and a viewing corridor where visitors can watch veterinarians at work. Juno could also boost attendance, which has been dropping (down to 1.1 million visitors last year from peaks of 1.4 million in the last decade) despite the residency of two giant pandas from China, Er Shun and Da Mao, who arrived in March, 2013. The public loves baby animals, and the zoo is enjoying a baby boom at the moment. Apart from Juno, zookeepers are helping raise Er Shun’s two cubs, born in October, and four white lion cubs, not to mention two bison, a camel, a gorilla and two hornbills. Because Juno had to be separated from her mother, raising her has been toughest of all.

Juno’s eyes should open for the first time in around a week. Next she will move into a bigger incubator and start exercising on a blanket. Then keepers will get her to eat from a bowl and offer her a first taste of meat. All things going well, the public should get to see her in about three months.

She should even get a proper name. Because she was born on Remembrance Day, her handlers nicknamed her after Juno Beach, the D-Day landing site. But that’s just a temporary handle that the zoo staff use. Bestowing a proper name will mark the time when her caregivers know she is truly out of the woods. Until then, Dr. Dutton and his colleagues are staying on guard around the clock, hoping the phone doesn’t ring in the night. 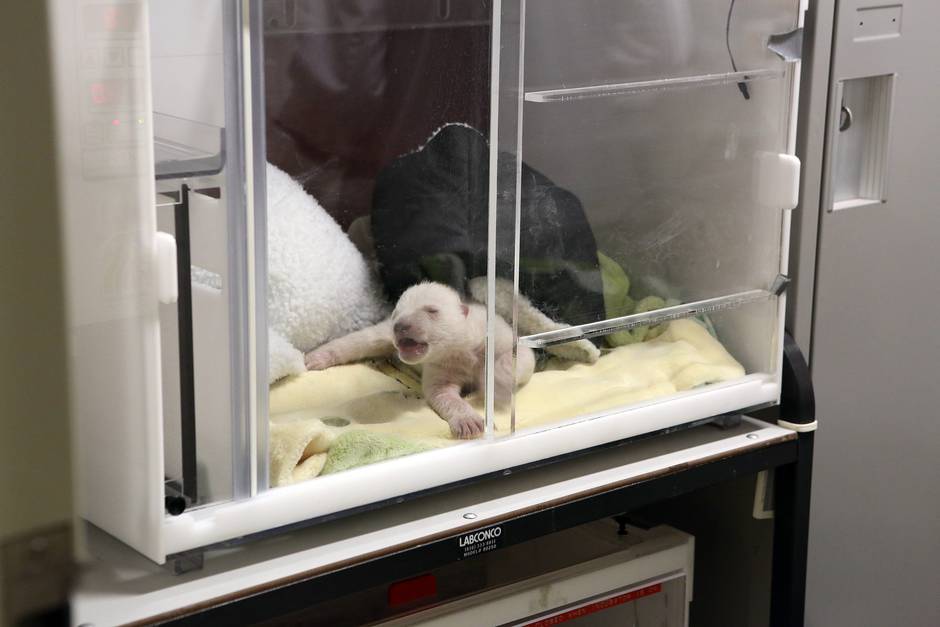