One of the best features of the renovated Nathan Phillips Square is a set of disappearing fountains. They pop up from the concrete paving stones as if from nowhere. Kids love to dance around and through them in the warm weather.

Yet if you ventured into the square this week, you would have noticed something odd. Metal plates painted bright yellow cover the exit points for the fountains, whether they are running or not. Splotched with rust, the nine yellow plates are wildly out of place amid the austere expanse of this classic square, designed, like City Hall itself, by the great Finnish architect Viljo Revell.

The plates are not the only design crime to mar Revell’s masterpiece. Some waste-management genius has placed wire-mesh garbage baskets around the square. Green recycling bins add to the trashiness. Jaunty “waste station” banners wave in the air to alert visitors to all the garbage-disposal options at hand.

The effect is like hanging fuzzy dice from the rear-view mirror of a Jaguar. Toronto’s principal civic space looks as if it is being maintained by the organizers of the Orangeville fall fair.

Ask yourself: Would the people who run Millennium Park, the magnificent downtown space in Chicago, allow such eyesores into their realm? Not on your life. 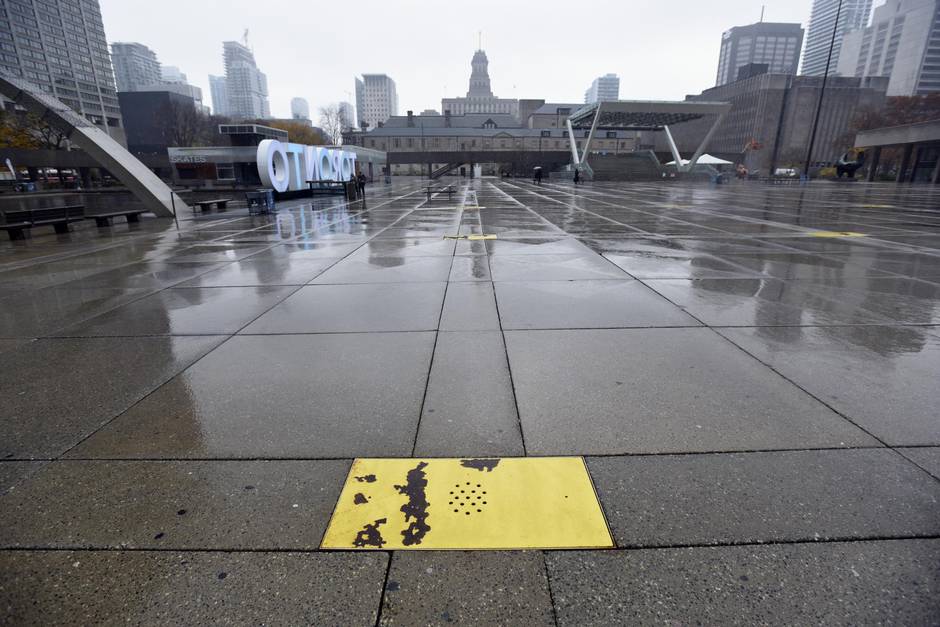 The metal yellow plates covering the exit points for the fountains are wildly out of place at Nathan Phillips Square. (Photos by Fred Lum/ The Globe and Mail)

Toronto has spent five years fixing up Nathan Phillips Square. The project features a new stage, skate podium and Peace Garden. In a project budgeted at more than $60-million, couldn’t the city muster a few dollars for bins that fit the look of this beautiful meeting place?

For that matter, couldn’t it find something better than the shabby wood-and-metal park benches put out for visitors who want to eat lunch outside City Hall? Couldn’t it find planters in some colour other than avocado, which looks ridiculous against the Nordic greys of Revell’s creation.

The whole thrust of the renovation was to restore its original simplicity and elegance. The project mostly gets there. But no one is paying attention to the details. 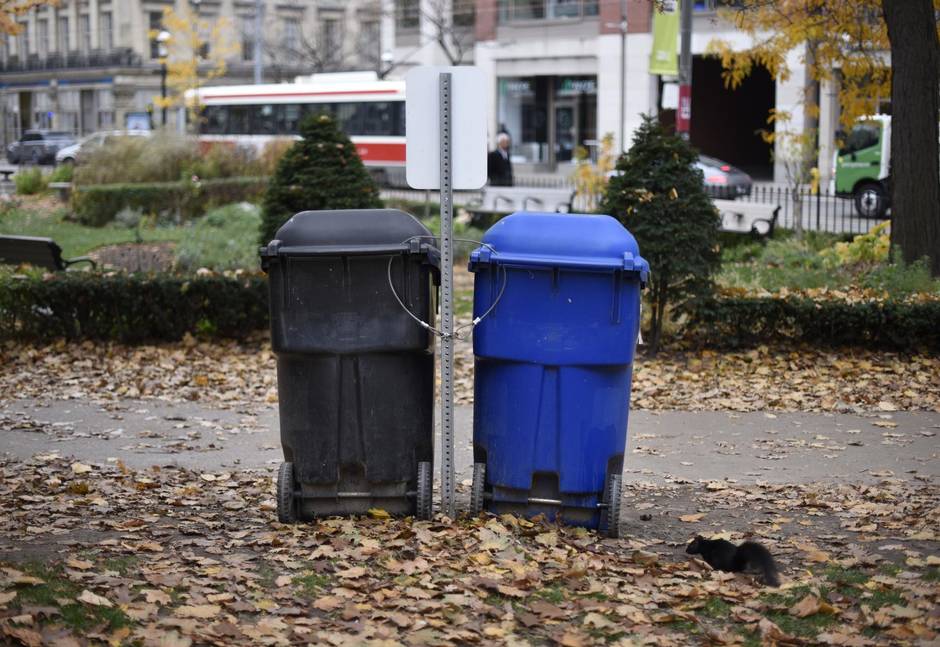 From obtrusive garbage and recycling bins to garrish ad wraps that seem to be increasingly swallowing up public transit spaces, Toronto’s ugly aesthetics aren’t hard for residents to come by.

The colour of a planter. The design of a trash bin. These may seem like little things, but little things can make a big difference to the look of public places and the way people feel about the city. Toronto is simply strewn with this sort of small-scale aesthetic vandalism – acts of random ugliness that deface the city.

Those ugly asphalt patches in newly paved sidewalks. Those ugly, bulging litter receptacles that have colonized street corners as part of a big street-furniture contract (the new, squarer ones are an improvement). Those ugly bilious tiles that cover the walls of Dundas subway station. Those ugly above-ground sidewalk tree planters that hold only tree stumps and cigarette butts. Consider the trash bins that now adorn city parks. They come in pairs – one in blue for recycling, one in grey for garbage – tethered to a metal pole. It is an efficient set-up, no doubt. City workers can empty the wheeled plastic bins more easily than the old version. The only trouble is that they look terrible. That matters. One of the purposes of a public park is to please the eye and soothe the mind. Blotting the landscape with plastic trash bins defeats that purpose. 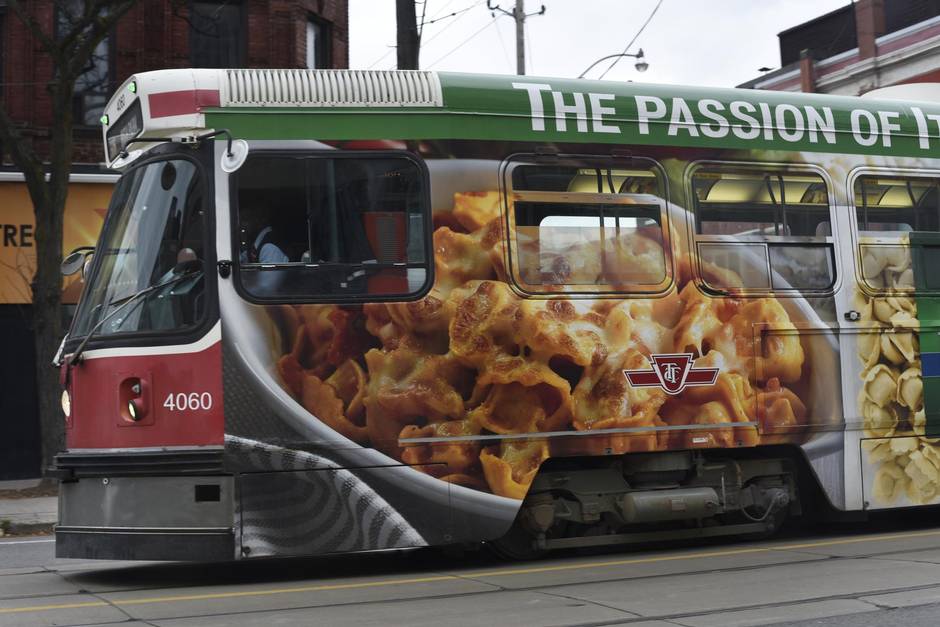 Advertising on TTC vehicles isn’t a bad thing, it brings in money to help pay for transit. But it would be awful if the new sleek streetcars are wrapped the same way.

Or consider the ad wraps the Toronto Transit Commission perpetrates on city streetcars. The red-and-white streetcar is a symbol of this city. The ad wraps cover the flanks and windows with eye-blasting commercial messaging. A little advertising on TTC vehicles is not a bad thing. It brings in money to help pay for decent transit service. But the ad wraps turn a public asset into a garish rolling billboard.

It would be awful if the TTC wrapped its coming new fleet of sleek extra-long streetcars in the same way. The few that already run on city streets are a dramatic sight. Let’s not disfigure them, too.

Worse than streetcar wraps are subway-station wraps. The TTC lets some advertisers plaster whole stations with slogans and logos. Even the turnstiles get wrapped. Tens of thousands of commuters have to pass through this noxious visual pollution every day. 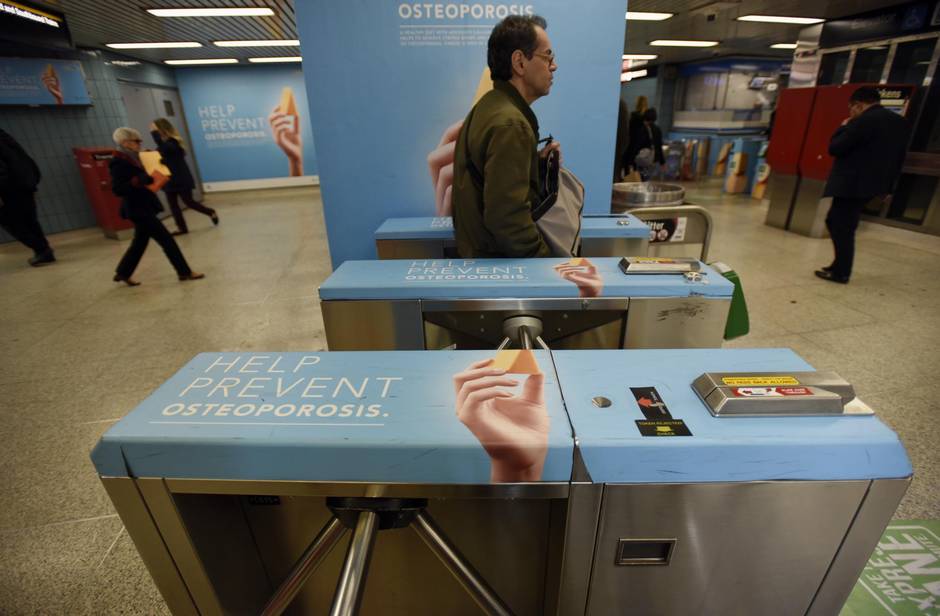 Turnstiles are also wrapped for thousands of commuters who pass by.

Some acts of ugliness do not spring from what is there. They spring from what is not there. Take the northeast corner of Yonge and Bloor Streets. The blank wall of the Hudson’s Bay department store simply kills the street, looming coldly over passersby. The same might be said for a block on the east side of Ossington Avenue south of Dundas Street. Somehow the city allowed a residential building there to turn its back on the street. That stretch of one of the city’s liveliest avenues is another dead zone.

We will never get a city hall debate about any of this. Beauty, or the lack of it, hardly figures in our civic conversation. It should. Beauty matters. The least we can do is stop uglifying the beautiful things we have, like Nathan Phillips Square. City hall says that those yellow plates protect the fountains during public events and cover them in the winter. They are slip-resistant to protect the walking public and painted yellow so they show through the snow in winter. How very practical. But, God, how ugly.